Bare Ease is a product kit founded by Dr. Edna that lowers the pain before grooming the bikini line by applying it before the process. The idea came to Dr. Edna from her background as a doctor and her passion for lowering pain. Dr. Edna worked on the product for about three years before coming on Shark Tank, but kept her full-time job as well to pay the bills. 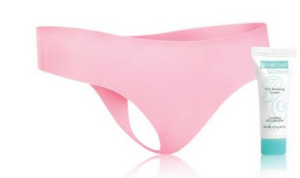 Not committing full time to the business was demonstrated in Dr. Edna’s sales before coming on the show. Despite this, Dr. Edna believed she had a great product that really solved a problem and felt she could make it successful with the help of someone who started a business before. Dr. Edna applied to be on Shark Tank because of this and was invited for season five.

Dr. Edna entered the Tank seeking $50,000 for 20% of her company. Dr. Edna explained her background and passion for stopping pain and how it led to her proprietary Bikini Wax numbing cream that could be used before waxing or laser to help lower pain. Kevin was immediately interested in the market size of the product and Dr. Edna stated a research demonstrated that 40%-80% of woman are grooming the Bikini line as it was becoming a “cultural norm.” Dr. Edna also showed the Sharks a men version which had all of them in laughter as they couldn’t believe guys would use a similar product.

Dr. Edna moved back into how she came up with the idea after experiencing the pain herself, and how her product specifically targeting the Bikini Waxing market made it different than similar products. Robert asked how long had the product been selling and Dr. Edna mentioned it was an over the counter product that they had been selling for three years. In the previous year, Dr. Edna did $45,000 in sales and was projecting $62,000 for the current which concerned all the Sharks. Dr. Edna felt lack of distribution was holding her product back as most her sales were online.

Mark brought up his common concern of an entrepreneur having another job along with running their business and how they manage to devote the right amount of time to both. Dr. Edna explained that keeping her full-time job as a doctor along with supporting a family was another thing holding her back which also concerned the Sharks. Kevin was the first to specifically address his concern of both the numbers and Dr. Edna not focusing entirely on her business. Mark agreed with Kevin mentioning that Dr. Edna’s idea was not a company yet and it would not happen unless she was willing to work full-time on growing the product. Because Mark did not see Dr. Edna committing to her business full-time, he went out.

Barbara was also concerned with Dr. Edna’s commitment and felt she was in the Tank to have one of the Sharks “drive the business home”, but that should be her job as the entrepreneur. Although Dr. Edna tried to defend her goal and mention she was looking for someone with experience to help her, Barbara was not convinced and went out. Kevin addressed another concern about the actual market size of the product and not seeing the sales go up and went out for that reason.

Dr. Edna moved away from the concerns and told the Sharks the story of how she got here by having a strong work ethic and being the first person in her family to graduate from college which has helped her parents’ goal of having their children live the American Dream. Lori was impressed with how Dr. Edna got here, but was concerned about competition and how early Dr. Edna was with the business and because of that, went out. Robert was also very impressed with Dr. Edna’s passion, but told her that the product was a hobby, not a business for the same reasons as Mark mentioned and also went out.

Despite not getting a deal and receiving heavy feedback from the Sharks, Dr. Edna continued her idea and her product is still selling. The Shark Tank effect has helped Bare Ease get more exposure as it has appeared on multiple TV shows and podcasts. However, it does not appear that Dr. Edna has committed full time to the product and that sales have not reached the full potential.

Robert mentioned at the end of Dr. Edna’s pitch that entrepreneurship has a risk that is sometimes not worth taking. Dr. Edna’s scenario is a good example of this because even though she has a great product and passion, it did not seem worth quitting a high paying job like Dr. Edna has to try to grow the product and make it a business. One must know that there is a market for the product, how they will get the product to the consumer, and what the long-term plan is if they want a product to be successful and it is appeared that Dr. Edna did not have all the answers. Despite Bare Ease not growing as drastically as other Shark Tank pitches, it has still allowed Dr. Edna to continue her passion of helping lower pain.

You can actually purchase Bare Ease on Amazon.com.  You can click here to view the product on Amazon and automatically apply all discounts to the listing.

The product has mixed reviews with some mentioning it works while others say it doesn’t. Although there is no distinct say on how effective the product is, those who positively review it heavily emphasize and recommend it especially because of the price.