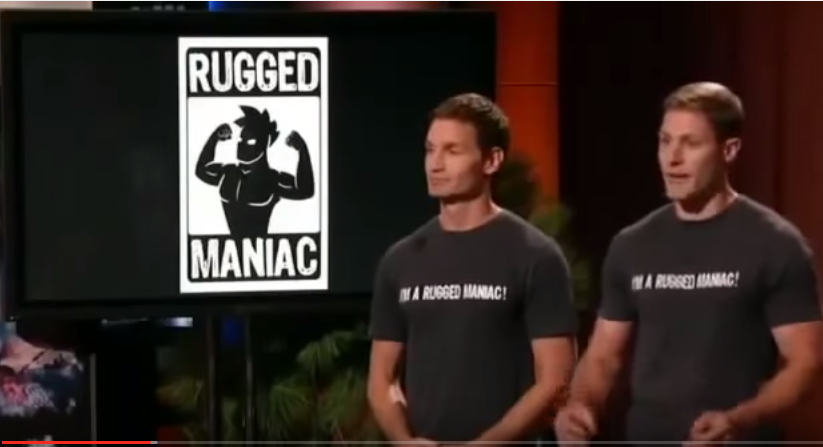 Rugged Maniac is an obstacle-course race designed for competitive thrill seekers. It was started by Rob Dickens and Brad Scudder who saw potential in this market by identifying weaknesses in the industry leaders business model. After starting the company with their own savings, Rob and Brad based their business model on reaching more of the general public by making the races shorter and by having more obstacles than their competitors. They also changed the layout which took away some hassle that racers faced at other events such as waiting for other people to get over one obstacle. With these modifications, they were able to launch their first successful event in 2010 in Southwick, Massachusetts.

Brad and Rob were able to grow the company in 2011 and 2012, hosting ten events both years and slowly taking share in the market. Although they did not aim at becoming the market leader, they started a new business in 2013 similar to Rugged Maniac from the profits they made, yet the business was different and unique from any of their competitors. They applied to be on Shark Tank hoping to get an investment and a valuable partner to help continue this growth and were invited for Season Five.

Rob and Brad entered the Tank seeking $1,000,000 for 10% of their company. Their pitch began by going into detail about their main event, Rugged Maniac, a three-mile course with challenging obstacles.  They described some of the obstacles their course had such as muddy water slides and jumping over fire and then presented a video clip of consumers who attended the event and what the experience was like. Robert was impressed, but stated he didn’t even know they existed, but knew they had competitors. Rob identified the uniqueness of their race such as having more obstacles with fewer miles and how this made their race more accessible to the mass market as most people can’t run long-mile races. Brad also stated how their race was the perfect balance between party and fitness because the course didn’t take too long to finish, which still left people exhilarated for after-events.

Kevin wanted to know the numbers. Rob mentioned they had 4.2 million in sales with 1 million in profit. They were also projecting over 6 million in the upcoming year and were hosting the event in twenty cities in 2013. Mark and Robert wanted to know more about the competitors. Rob went into detail about how their competitors had more events over the year, but this was because their competitors were first to market. Robert was interested in what they would do with the 1 million dollar investment, but Brad thought he was referring to the 1 million profits and told Robert that they invested that profit into another brand they owned. This immediately upset the Sharks as they never like entrepreneurs who invest their time into another job or a business that will not be a part of the deal.

Rob than showed the Sharks the video of their other company: Running with the Bulls also called the Great Bull Run; a similar marathon race to Rugged Maniac with bulls and a tomato royale involved. Robert was in love with this idea as well. Kevin was wondering if anyone got hurt and they mentioned they had a couple injuries such as a broken arm which led to laughter from Mark. Daymond was surprised that people actually paid money for these events, but Brad knew this was a common assumption from many people, but there was proven demand. Daymond than asked the main question: if Running with the Bulls would be included in the investment, but Brad stated it was a separate company. Rob and Brad wanted an additional 2 million for 10% of Running with the Bulls which would total the investment to 3 million for 10% of both companies.

Brad mentioned they had $280,000 in sales in Running with the Bulls, but felt it could be a 20 million dollar event in the first year. Mark than brought up the issue of him investing in one company, but the entrepreneur’s focusing on another as this would lower the chance of him getting a return on his investment because of a conflict of interest. Robert, however, once again emphasized his love for both events and made Brad and Rob an offer of 1.5 million for 25% of both businesses, lowering the valuation all the way from 30 million to 6 million. Brad and Rob briefly considered it before turning their attention to Mark who said he was interested, but first wanted to hear their answer to Robert. Robert went into detail about his valuation being fair as he saw the potential with the second business.

Daymond originally felt he couldn’t give them $1,000,000 for the first business and was even less interested when he learned about the second business and went out. Barbara told Brad and Rob she loved them when they walked in, but they lost her trust as the pitch went on when the new company was brought up and also went out. As Rob turned his attention back to Mark, Mark went back to his concern of investing in an individual business and also mentioned that he felt Robert’s valuation was too high. This led Kevin to proposing a new offer of 1.5 million for 33%, but wanting Robert to join in on his deal. Hoping to pressure Brad and Rob, Robert agreed to go in with Kevin. After hearing all the offers, Mark, as normal, came in with his offer last of 1.5 million for 25% which conflicted with his original comment of Robert’s offer being too high. Brad and Rob went out to discuss both offers. As they were outside, Robert felt Brad and Rob wouldn’t take either offer while Daymond felt Robert should drop Kevin and go back to his original offer if he wanted a chance at a deal. Robert didn’t do this, however, as Rob and Brad walked back in. They told Mark they wanted to make a deal with him and countered at 1.75 million for 25%, still extremely lower than their original ask, but because they saw value in having Mark as a partner. Mark immediately took the offer, very happy with the deal he got and telling Rob and Brad they would make tons of money. As they left, Mark said he was very surprised they came down to such a low valuation. Robert didn’t question why Mark originally disagreed with his offer than made the same offer. However, this, of course, turned out to be a sneaky trick commonly seen by Mark which led to a successful deal.

The deal between both parties closed after the show with Mark successfully getting a piece of both companies. Mark’s investment has helped Rugged Maniac grow as the company will have close to thirty events by the end of 2015, a jump from the twenty events hosted in 2014. Mark also helped them implement new ideas such as medals for winners based on factors such as age. Rugged Maniac continues to gain thousands of thrill seekers to all of their events as the company grows. They have also done a great job of keeping their previous consumers happy by staying up-to date on previous events through Facebook and Youtube.

Brad and Rob’s pitch, like many in season five, demonstrates that entrepreneurs have learned that knowing as much as possible about their company such as who their competitors are, projected numbers, how they are different, etc. is needed to grab interest from the Sharks. Many would argue that Brad and Rob should have went in and offered both companies from the get-go rather than trying to keep it a secret. However, both Brad and Rob appeared very smart and it appears they planned to bring up the Great Bull Run before coming on the show and likely knew they would have to give up some percentage of it to get a deal. Reasons for not disclosing the Great Bull Run from the get-go may include increasing hype about the potential of their company or hoping to get a better valuation. For most entrepreneurs, however, it is best to go in and provide any relevant information rather than trying to benefit off it in another form as it will probably lead to upset Sharks. Nevertheless, in the end, even Mark was surprised with the valuation they took as it was less than what they wanted for just the original company so they either saw huge potential in having Mark as a partner or originally hyped it hoping to get something more than what they expected the Sharks would offer if they stared with a lower valuation.

The Great Bull Run, however, has gone through trouble since Shark Tank. Originally, Mark’s investment helped the company add more bulls to their races and they were able to host multiple events. Public safety concerns was what originally caused the company trouble as it led to canceled events in California. Things got even worse for Rob and Brad when animal activists came in and sued their company as the activists felt the event was dangerous not only to the runners, but to the bulls. Rob and Brad tried to defend their company, stating the event was safe based off very few injuries and how their event was structured in comparison to the similar event held in Spain, but had trouble convincing this. This led to another California event getting canceled and an original plan to host only one major Bull Run in Chicago in 2015. The Great Bull Run that Rob and Brad hoped to hold in 2015 did not happen either, however.  They mention on their Facebook page this was because they want to find a location that could financially sustain the events for years. Their website, however, states the event will return in 2016. The fact that Mark got a very good deal on the show has likely evened out now that the Great Bull Run has become inactive. Mark still has the Great Bull Run as a company he invested in on his website, indicating that the event is indeed likely to return as he and the other Sharks normally remove companies from their websites that they invested in, but end up failing.