The Chef in Black Now – The After Shark Tank Update 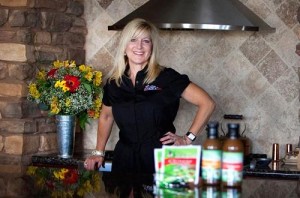 Dorene Humason is a woman with a strong determination to create her own destiny. However, it took her some time to realize she wanted change the way she was living her life. Dorene invested a good deal of her time into retail food sales. More often than not, her work days were long and tiring and it was after one particularly stressful 14 hour shift that she decided it was time to make a change.

When Dorene went home that evening, she sat down and decided that she wanted to make a new gourmet salad dressing. Having 25 years in the food industry under her belt definitely gave her an edge. Having a vast array of knowledge about culinary arts helped her be able to develop the perfect recipe for a dressing she often found herself craving, but could never really find in the supermarkets. What she wanted to create was a Chinese salad dressing that included a lot of fresh and all-natural seasonings that and tasted as if it were restaurant quality.

It took her quite a few attempts to get the perfect blend of seasonings and oil before creating the perfect dressing, but eventually she did. Dorene decided to name her new dressing “Jaden”, which was inspired by the Chinese treasure, jade. After she had finally produced what she considered to be the perfect salad dressing, she left her former job in order to pursue her own business. Dorene also then took to ABC’s Shark Tank to pitch her business idea to the Sharks, hoping that she could find a business partner to help her get The Chef in Black off the ground.

Dorene enters the Shark Tank seeking a $50k investment for a 10% stake in her company. Then she proceeds to explain her products, which are the Jaden salad dressing and packets of seasoning mix. Her daughter, Brooke, hands out small samples of the dressing for the Sharks to try while Dorene continues on with her sales pitch. They each agree that the dressing is pretty tasty and Dorene tells them that her product is currently supplied to around 1,300 grocery stores. Robert Herjavec then comments that since previously investing in another food product, he found that there are millions of different salad dressings and barbecue sauces on the market. So what he wants to know is how she plans to sell this product on a national scale and bring in millions of dollars worth of profit. Dorene can understand his concern, but she tells him that she made sure the risks she is taking are minimal and that her product is indeed a popular one.

Kevin O’Leary decides to take a step back, inquiring again on the stores she currently supplies. He wants to know what kind of money she is making in sales off of her products that are already in stores. During her first year of sales when she supplied only 450 stores, she made around $78k. Her current sales plummeted down to $41k however, due to some packaging issues she encountered. She had to pull all her products off the line and repackage them because the design on the former package was considered offensive. What she had wanted was something unique and interesting on her package and so hired a Chinese art expert who revealed to her that the logo she had on her product was a Chinese prostitute. Since then she has remolded the packaging accordingly.

Aside from that speed bump, O’Leary wants to know what exactly her product is; whether it is a salad dressing, seasoning packet, or a rub. For the start of The Chef in Black, Dorene wante 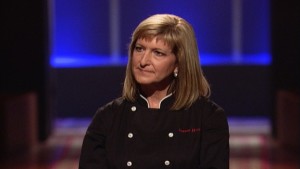 d to begin with the dry dressing packet because of the low startup cost. Kevin Harrington also has some confusion regarding what her brand is, because her company is named The Chef in Black but her product is labeled as Jaden. To clarify, Dorene explains that Jaden is not the only product she plans to sell. In fact, she has other dressings and seasonings in the development process already. Harrington states that if she could focus on one brand and one product first, before thinking about launching other products, then he might consider investing into her company. Unfortunately though, due to the confusing nature of what she is trying to accomplish, Harrington does not invest. Shortly after that, Herjavec also agrees with what Harrington had to say and decided not to strike a deal with Dorene.

Daymond John, a Shark who has dealings with multiple food businesses, says that he can understand where she is coming from and believes that she might have some hope in the industry, but for right now the business she has makes him wary. So he too decides to not invest into The Chef in Black. Then O’Leary argues that if it is her goal to become a food manufacturer, other larger companies would ultimately crush her. Barbara Corcoran is quick to disagree with him. She says that it is the smaller companies in the market that have innovation on their side, which O’Leary still disagrees with. He argues that he could have people taste and replicate the seasoning she has created, but Dorene begs to differ. Because she spent so much time in various different Asian markets and compiled a unique blend of spices, she doesn’t believe that anyone would be able to recreate it. This fails to convince O’Leary and he decides to drop out.

With Corcoran as the last Shark standing, Dorene can only hope that she will be willing to reach out and strike up a deal. However, Corcoran admits that the food market scares her as a result of the high percentage in business failures. The only thing that has her really considering a deal is the fact that Dorene did not shake under the questions she was asked and had all the right answers. So she does decide to give her an offer of the original $50k, but in trade for 40% of the company. In addition to that, she would also have to create a more concise brand and be committed to selling only the one salad dressing for a certain period of time. Dorene agrees to the terms that Corcoran listed, but asks that she reconsider for a 35% stake instead of the 40%. After taking a minute to think on it, she ultimately decides to accept the terms of the new deal and the women go in together as partners. 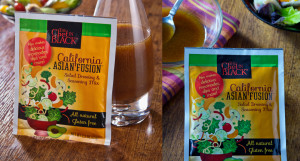 After the episode aired, the deal between Barbara and Dorene fell through because Dorene still wanted to follow through with the production of bottled dressing in addition to the seasoning packet. She could respect that Barbara is a smart business woman in regards to real estate, but she didn’t think that Barbara could understand food in the came capacity.

Since appearing on the show, The Chef in Black has expanded to over 2,000 stores and is now being sold in WalMart, which Dorene believes is going to give her company a much needed boost. For a while, the publicity she received from being on Shark Tank definitely did help out her business, but it is not what kept her going through. Dorene believes that it is her own passion and determination that keeps the company growing and moving forward.

The Chef in Black now has its very own website (http://chefinblack.com/). On the site, potential buyers can explore the new products that Dorene business offers. In addition to the original Chinese salad dressing she created, The Chef in Black also sells clothing, kitchen accessories, and even gifts for people who are a fan of the brand. It looks like Dorene and her company are doing quite well despite the fact that they actually left the Shark Tank empty handed.