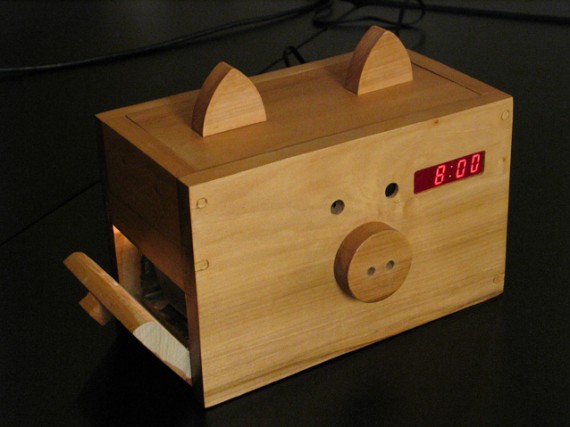 Matty Sallin, a fairly recent college graduate, is the inventor of Wake N Bacon. Albeit the invention itself is very strange, the concept itself actually isn’t half bad. It was while attending an introductory electronics class in college when Sallin thought up the idea of creating an alarm clock that was slightly less offensive than your traditional buzzing alarm clock. Instead, he decided to invent something that might actually encourage those grouchy morning people out of bed. What he ended up making was an alarm clock that serves you a nice morning treat instead of blaring that loathed buzzing noise right in your ear. 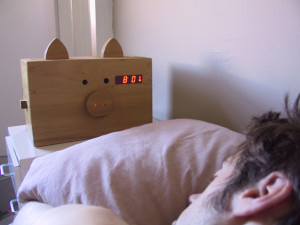 The product is simple enough. The alarm itself resembles a pig and inside it is a chamber that holds the bacon. When it comes time for that dreaded morning wake up call, the alarm clock warms the bacon and is supposed to gently pull you from your sleep with the smell of it cooking. It’s not such a bad idea, considering there are lots of bacon lovers in this world and, to be honest, who wouldn’t enjoy being woken up in the morning by food? However, being new to the business industry and in need of some financial backing, Matty decided to head over to the Shark Tank to attempt to get one of the Sharks to bite onto his pitch.

Sallin enters the Shark Tank and asks the Sharks for a $40k investment in exchange for 20% of his company. Shortly after giving them his asking price, Sallin then begins to tell him where the origin for his product stemmed from. While taking the introductory electronics class, he took a survey and asked fellow students what the ideal way to be woken up in the morning would be. After reviewing his data, he concluded that most people enjoyed waking up to the smell and taste of bacon. From there he went home and designed an alarm clock that wakes you up with bacon. 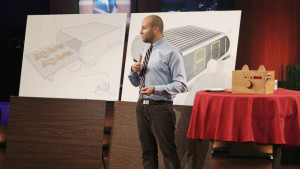 Inside the alarm clock is a chamber that can hold up to 2 or 3 slices of precooked bacon. Once you’ve put in your slices of bacon, you would set the alarm like you usually would. In the morning, about 10 minutes before you want to be woken up, the Wake N Bacon alarm clock quietly turns on and begins to heat the bacon you have left inside. This way the bacon is nice and crispy and the aroma is strong enough that it will wake you up. And, of course, the yummy breakfast treat is there for you to eat, which should be motivation enough to drag anyone out of bed.

Sallin posted his Wake N Bacon on his own website online and it has since then gone viral. According to him, hundreds of people have emailed him with requests for the Wake N Bacon. That is ultimately what brought him into the Shark Tank. With the money he asked for, he plans to redesign the alarm clock to make a functional prototype that can be mass produced and be sold to retail locations. He even brought a few pictures of the potential design of the new Wake N Bacon, which displays a toaster oven type alarm clock that has ears and hooves that resemble a pig.

Robert Herjavec is the first to ask if they could try the bacon and mentions how he is actually pretty fond of the current design of the Wake N Bacon. He also asks if it comes with a slogan, which Sallin reveals is “rise and swine”. This gets a laugh out of all of the Sharks, but Kevin O’Leary brings up a very serious point. If they were to sell the product, he wants to know what would happen if they sold an alarm clock that ended up setting fire to someone’s bedroom. Sallin responds by saying the product would of course need to be UL listed, which means that it would be deemed safe in the home, but O’Leary does not believe that people would want an alarm clock cooking bacon by their beds. In attempt to counteract this argument, Sallin compares the Wake N Bacon to the Easy Bake Oven. He argues that “you don’t know where kids are going to put that” and that “if they can figure it out” he can too. 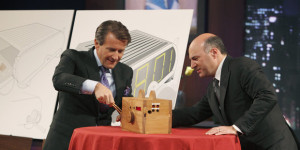 Moving on from that particular hiccup in the pitch, O’Leary moves on to ask about pricing. Each unit would cost around $13 dollars, but Herjavec wonders where he is going to get the money to produce them once he spends all the money on creating a working prototype. According to Sallin, he plans to pitch the idea to other retailers and manufacturers that he would create a partnership with. Mark Cuban clarifies that this will end up being a novelty item and asks how many units Sallin thinks he can sell. Unfortunately for the Sharks, he is uncertain of what the actual sales would look like if the Wake N Bacon ever did hit the shelves.

O’Leary, outraged that Sallin didn’t even give them an “interesting” answer, says that his “pig box” is not worth investing into. Then Barbara Corcoran speaks up for the first time since the pitch started. She tells him that the product itself is very whimsical and could be a good gift for some people, but she also doesn’t believe that there are many people out there who would really want bacon cooking that close to where they sleep. Quickly after her, Herjavec also decides not to invest.
That leaves Daymond John and Cuban left as the only potential investors for Wake N Bacon. John admits that he does enjoy bacon, but after O’Leary pressures him for an answer, he says that he is not interested in investing. Cuban then takes his turn and asks what Sallin thinks the minimum production run would be. The lowest production run would be about $10k and each unit would sell for $13 dollars which would bring in $130k. Cuban asks where the money would be coming from and Sallin answers by telling him that that’s the reason why he needs to partner up with a retailer, manufacturer, or an investor. O’Leary chimes in again, saying that he would sue if his bed ever caught fire, but Cuban brushes that off by saying he has no issue with buying insurance. The only problem he really has is that Sallin asked for $40k when in reality he needs $170k.

The other Sharks seem to be baffled that Cuban is even entertaining the idea of buying into this product because it comes with a lot of risk. However, he argues that this is just a gift that people would buy for their dads because it’s so tacky and, in Cuban’s words, stupid. It has the potential to be a great gag gift, however, he is unwilling to put up the $170k that it would need to really take off. So with the last Shark out, Sallin has to walk away from the Shark Tank empty handed.

After appearing on the show, not much else came from Matty Sallin or his Wake N Bacon business adventure. There are a few articles posted about it online and some people have been asking where they could potentially buy one, but as or right now the Wake N Bacon does not have a website, nor is it listed on places like Amazon or Ebay. So, unfortunately, it would appear as if the business ended up flopping and never making it out of the prototype stages.