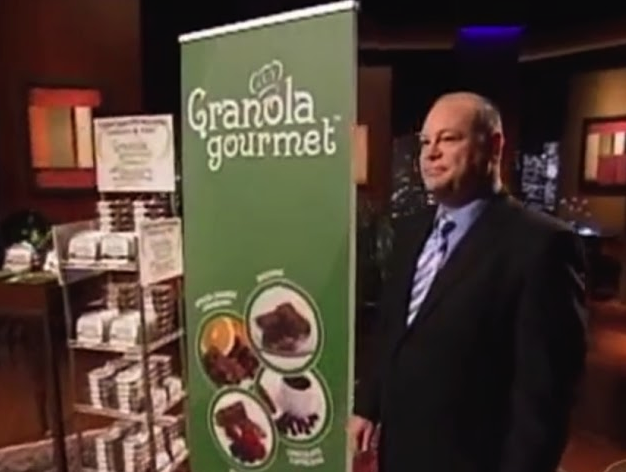 Jeff Cohen, inventor of Granola Gourmet, lives in Stevenson, California. He has been married for twenty years and he has two sons. Jeff Cohen has been a diabetic for nearly fifteen years, and he states that it is impossible to find snacks that taste good and won’t spike his blood sugar at the same time. Jeff Cohen and his family have come up with an idea for a healthy, gourmet diabetic product, which is not made just for diabetics, but for anyone who is interested in a healthy lifestyle. 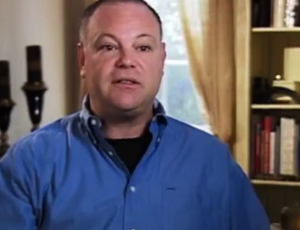 “Jeff Cohen walks confidently and stands in front of the Sharks”

Jeff Cohen starts by introducing himself and by telling the Sharks that he is the Granola Gourmet. He tells the sharks that he is looking for a hundred and seventy five thousand dollars, in return for a twenty five percent stake in his company. Jeff states that before he will start his presentation, he really wants the Sharks to taste his product.

“Jeff Cohen gives the Sharks a tray of his product, and they start tasting it”

Jeff Cohen starts his presentation and states that he is there to introduce the Sharks to a gourmet diabetic product, which also has a slogan that says; “Energy bars for athletes, diabetics and you!” Jeff continues his presentation by saying that he has been diabetic for fifteen years, and that he was never able to find a snack that both tasted very good and wouldn’t cause his blood sugar to spike. He says that, because of this reason, he and his family decided to create Granola Gourmet.

“Jeff Cohen asks the Sharks if they liked the granola bars” 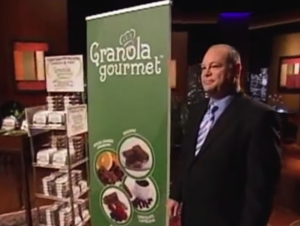 Jeff Cohen states that his products are also very good for them, next to tasting very nice.

“Robert Herjavec asks Jeff how much experience he has in making granola bars, and how he came up with the formula for his products”

Jeff Cohen answers this question by saying that he woke up one day, and his wife was making muffins, to which Jeff said that it would be great if she would make something that he could actually eat as well.

Jeff Cohen continues by saying that his son was fifteen at the time, and his son told him that he likes the idea of making something that they both could enjoy. After that, he and his son spend two weeks in the holiday period, researching and finding out which ingredients would not spike the blood sugar of a person with diabetes. They identified the fact that they could make a nice granola bar, out of all the ingredients they found. Jeff states that his wife was the first person that tasted his granola bar for the first time, and she gave him the greatest compliment he ever received in his life. His wife liked his fruit flavored bars the most.

“Robert Herjavec asks Jeff how long he has been married”

Jeff Cohen answers the question by saying that today is the anniversary of their wedding, and that he has been married for exactly twenty years.

Robert Herjavec tells Jeff Cohen that he has been married for almost twenty years as well, and that he finds it funny that the smallest compliments coming from wives, are most of the time interpreted as the best compliments ever.

Jeff Cohen continues his presentation, and says that you always get the most honest opinions from your spouse, sometimes too honest even. Jeff states that their biggest success has been in the southern California region, in the nation’s largest natural food market, Whole Foods. Jeff states that he and his family have worked very hard to get into Whole Foods, and that it has not been an easy journey so far.

Jeff Cohen answers the question by saying that his sales with Whole Foods have been around ten thousand dollars a month, and that figure is most of his sales. He also states that they are in ninety percent of all Whole Foods stores in the southern California market, which comes out to a total of twenty four stores. Jeff states that they are getting orders every week or two weeks, and they have been doing it for only six or seven months so far.

Robert Herjavec says Jeff has been doing a great job, and that he likes his approach. Robert says that Jeff has been able to get into Whole Foods, and they got behind Jeff, which is also very important. Robert Herjavec tells Jeff that he has to roll out his products nationally, in all Whole Foods stores, which will increase his sales significantly. He states that Jeff could look into selling his products to other stores, once he has established a national footprint. Robert Herjavec asks Jeff Cohen why he has not already done that.

Jeff Cohen answers the question by saying that it requires a lot of cash, to be able to expand like Robert Herjavec has described, and that they have been bootstrapping the company since the beginning. Jeff Cohen also states that he had a software company, and that he personally guaranteed a lot of loans for that business. After six years of running his software company, he got stuck with a number of those loans and after selling some of the assets of his company, and he had a personal bankruptcy because of it.

Kevin O’Leary continues by saying that he is going to be real. He states that Jeff Cohen went bankrupt, which wiped out his ability to raise money from a bank. Kevin O’Leary says that, that is life, and that it is not his fault, and states that Jeff’s business is definitely not worth seven hundred thousand dollars, but maybe a couple of hundred thousand dollars max. Kevin O’Leary continues by saying that, if he would give Jeff Cohen a hundred and seventy five thousand dollars, he would have to own his whole company, and not just twenty five percent of it.

Jeff Cohen states that he thinks that the number he put out there was fair, and that they could work together to figure out the best kind of investment for his company.

“Jeff Cohen says that he appreciates the opportunity to be able to present, and walks away” 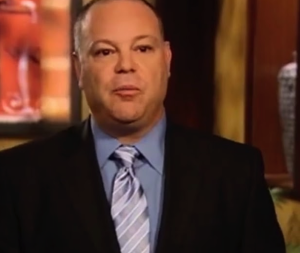 Jeff Cohen and his family have set up a nice little business, and apparently there is demand for their products, because they are already having sales up to ten thousand dollars, each and every month. They are selling their products through Whole Foods, Amazon and their own website. Jeff Cohen did not manage to get an investment from the Sharks, but it does not seem like that stopped him. There is no mention of Granola Gourmet being the best or worst on Shark Tank. The reason why the Sharks did not invest in Granola Gourmet is because of the fact that Jeff Cohen has gone through a personal bankruptcy, which means that he will never be able to raise money from any bank.

Granola Gourmet did definitely not fail as a business, even if Jeff Cohen did not manage to get an investment from the Sharks. Jeff Cohen has a foot in a very large market, and he even managed to get his products in Whole Foods, which really tells something. Jeff will need to come up with another idea to raise a lot of money, in order to be able to expand into different markets and make more sales. As of right now, there are many different Granola Gourmet products on sale, ranging from regular granola bars to very exotic ones, with multiple different fruits and nuts. The price for Granola Gourmet products starts at $10,99 for the smallest package and goes up till $29,99 for the largest package available.