Mark Hamill Now In 2018 – What Happened To Him Update 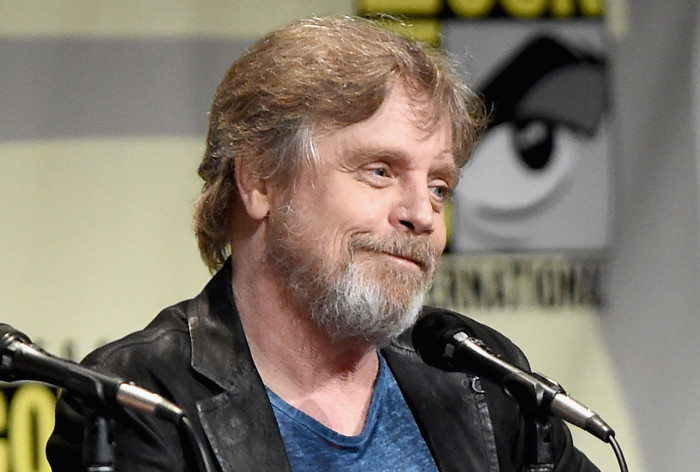 How do you sum up a career like Mark Hamill’s? From the 1977 cult classic “Wizards” to the most recent “Star Wars” film, Mark Hamill has had a long and storied career. Almost outshone by his most famous role, he has made a name for himself outside the “Star Wars” franchise in voice acting, Broadway and even the comic book industry. Let’s take a look at where he came from and where he’s going.

Mark Hamill was born on September 25th 1951 in Oakland California. He is the son of Virginia Suzanne and Captain William Hamill. Something of a Navy brat the Hamills moved with William’s deployments and as such Mark would attend many schools. He graduated in 1969 from Nile C. Kinnick High School, then located in Yokohama, Japan.

He moved back to California to enroll in Los Angeles City College to major in drama. After graduating he leaped into the television industry. Appearing in a wide variety of roles, including a recurring part in “General Hospital” and a first step into what would be a lucrative career in voice acting with 1973’s “Jeannie”.

Mark Hamill had a brief starring role in the short-lived sitcom “The Texas Wheelers”. The show, though loved by critics at the time, was cancelled due to low ratings. His first major film role was the fantastic 1977 animated film “Wizards” from pioneering director Ralph Bakshi. The film was an early example of the little known “Steampunk” genre of fiction. 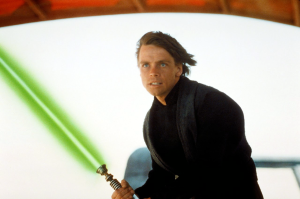 1977 would be a life changing year for Mark Hamill. Released in May “Star Wars” became a cultural phenomenon. Akin to Spielberg’s “Jaws”, the film helped popularize the summer blockbuster. It would go to be the third highest grossing movie of all time, adjusted for inflation, taking in 2.8 billion dollars.

George Lucas was sharing the casting couch with Director Brian De Palma, who was making “Carrie” at the time. Mark’s friend Robert Englund was on his way to an audition for another American Zoetrope alum, Francis Ford Coppola, for “Apocalypse Now”. When he passed by the casting of “Star Wars” he contacted Mark and told him he should audition.

George was looking for a fresh-faced youth who could project both intelligence and integrity. Mark Hamill, already a familiar face on television, was perfect for the role. The three stars were hired as a group for their dynamic chemistry. Mark would star in the two sequels to the film and Luke Skywalker became an icon, an image that will likely stand the test of time for years to come.

Between “Star Wars” films Mark Hamill appeared in films that contrasted his role as Luke Skywalker. Eventually he made it to Broadway starring as the eponymous “Elephant Man” John Merrick. Following shortly after singer David Bowie’s performance he began a fifteen week run in the play. Unfortunately he couldn’t escape the shadow cast by Luke as even the promotional materials for the show featured Mark Hamill as Luke Skywalker. The show would close after only three weeks and no critics ever reviewed his performance.

His next role on Broadway would be his well received portrayal of Wolfgang Amadeus Mozart in Peter Shaffer’s “Amadeus”. He won acclaim for his performance, being nominated for a Tony award. When word came that they were adapting it for film Mark Hamill thought he was a shoo in for the lead. The producers had other ideas saying at the time “I don’t want Luke Skywalker in this film”.

Mark Hamill’s film career flagged somewhat in the late eighties and nineties. He appeared in a few science fiction films, such as “Slipstream” and “The Guyver” but as far as live action’s concerned he was relegated to appearing as pastiches of himself and Luke Skywalker. The kids who saw “Star Wars” in the cinema were all grown up now and making films, giving him some work. Where he really shined was in the voice acting scene.

Beginning with 1992’s “The Legend of Prince Valiant” Mark would go on to have a fantastic career behind the mic. Perhaps it was fate then when later in that year Mark Hamill would be cast as Batman villain The Joker.

He originally joined the cast of “Batman: The Animated Series” in the award-winning “Heart of Ice” episode playing antagonist Ferris Boyle. Written by Paul Dini, it reinvented Mr Freeze as a sympathetic villain, a portrayal that would carry over to the comics. He auditioned for the role of The Joker after Tim Curry was rejected for being too creepy. 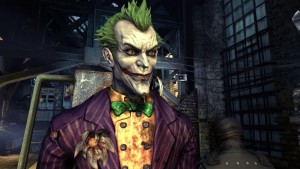 Mark Hamill would embody the role. Using his laugh like a musical instrument to convey the mood of the character. In interviews he mentions driving to work practicing different kinds of laugh and getting odd looks from other motorists. He would go on voice the character in every DC animated universe show through the nineties and well into the 2000s. His performance is, to my mind, the best of all who have played the character.

While a few Batman video games were released during his tenure as the character none were better received than the 2009 Rocksteady Studios release “Batman: Arkham Asylum”. Cast again alongside Batman VA Kevin Conroy and playing the character in the game’s two sequels, let just all forget about the arrhythmic “Arkham Origins” shall we?, Mark again knocked it out of the park. He would win awards for the performance.

Aside from The Joker, Mark appeared in countless animated shows and video games. A rare live action appearance in the “Wing Commander” series saw positive critical press for his performance. This would not be his last collaboration with creator Chris Roberts.

In the comic book arena he co-wrote “The Black Pearl”. The 1996 crime thriller began as a screenplay that Mark had been pushing for production, with him as the director, since before the first issue saw print. Something of a subversion of the superhero genre it was more concerned with sensationalism and tabloid journalism than the actual super-heroics.

This doesn’t even cover half of his career. Mark Hamill has been working steadily for nearly half a century there really isn’t enough space. Last year we saw him appear in “The Flash” somewhat reprising his role as “The Trickster”. Mentoring a youth who takes up his villainous mantle the performance was fantastically dark.

A triumphant return to the “Star Wars” franchise, reprising his role as Luke Skywalker, in “The Force Awakens” with more to come, I’m glad to say. It was also announced that Mark Hamill will be joining the cast of “Star Citizen’s” single player campaign dubbed “Squadron 42”. Again partnering with Chris Roberts in a space opera and starring alongside big names like Gary Oldman. Tentatively slated for release in late 2016.

Most excitingly, for me anyway, was the announcement that Alan Moore’s macabre 1988 graphic novel “Batman: The Killing Joke” would be adapted into an R rated animated film. Mark Hamill has long said that if an adaptation was to be made he would love to reprise his role and in mid 2015 it was confirmed that he would indeed be playing the character. It is likely that this will be his final performance as the character. It will be released later this year.

Mark has recently spoken about his sadness regarding the early passing of close friend Carrie Fisher. Her death hangs over the future of the Star Wars Franchise, and one expects His character in the films to go in a different direction.