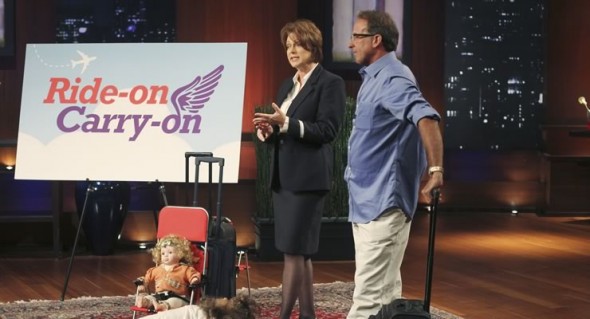 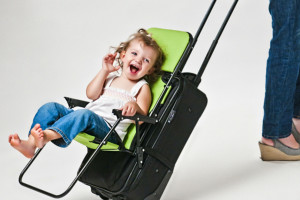 Randy and Darryl Lenz are a couple who were inspired by their every day encounters at work to become overnight entrepreneurs. Darryl has been a flight attendant for 27 years and during that time she has witnessed quite a few repetitive airline struggles. From her personal experience, she has encountered numerous families who were faced with the challenge of lugging around bulky strollers for their children. Pushing around a stroller makes going through the boarding security process all the more difficult and it’s not so easy to handle both a stroller and a suitcase. So, the couple put their heads together and sketched up a design for a new product that would solve this issue.

What the two came up with was Ride-On Carry-On. The premise for the product is pretty simple and arguably more convenient than pushing around both a stroller and a suitcase. The Ride-On Carry-On is a basic child’s chair that attaches to any suitcase that has wheels. This way all you need to do is strap the product onto your luggage and you have your two-in-one suitcase and stroller. The chair also has a seat belt of sorts to make sure your child is securely held in place. There is also an attachable table that can be connected to the chair, which would allow your child to hold drinks or perhaps a toy to keep them entertained while waiting to board the flight. And the most convenient aspect of it all is that the Ride-On Carry-On can be neatly folded and stowed away into the overhead cabinet of any aircraft.

Since the creation of their product, Randy and Darryl have made decent success with their sales. In fact, they have received so many orders that their supply of chairs has run out and they now need an investor to help them mass produce the Ride-On Carry-On’s so they can sell them in retail locations. That is why the couple decided to bring their pitch to ABC’s Shark Tank, hoping that one of the Sharks would see the potential in their product and give them the investment they need to get their sales going again.

Randy and Darryl enter the Shark Tank seeking a $50k investment in exchange for 25% of their company. As Darryl moves into their sales pitch, her husband demonstrates common airport struggles that people with children may encounter. He holds two bags on each of his shoulders while fussing with the life size child doll in her stroller. While maneuvering around his luggage and the stroller, it is clear that Randy is struggling pretty badly, which is supposed to replicate what real life people do in airports. Once the stroller has been collapsed and put away, Darryl brings out the Ride-On Carry-On. The seat is attached to a suitcase that has wheels and according to her, it can safely hold a child that is anywhere between 8 months and 5 years old. Once your destination has been reached, all you need to do is fold the chair and put away in any overhead bin. 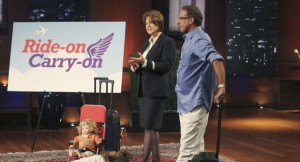 The Ride-On Carry-On has brought in thousands of sales online, but Darryl believes that it’s about time that their product be supplied in retail stores because she wants to help minimize the stress in traveling parents. Robert Herjavec seems to think that it’s only a “lawn chair strapped to a piece of luggage”, but the couple assures him that their product was designed by herself and other airport employees, in addition to being tested by them as well. After taking one of these chairs on a trip, her co-workers and customers all loved it. Concerned with the safety of it, Herjavec then asks if there is any way to make sure that the kids stay seated. One feature of the Ride-On Carry-On is that it has a seat belt with a crotch strap to ensure that any child will stay in place. In addition to the seat belt, their product passed all the safety tests in both the U.S. and Europe. So far they haven’t received any complaints about safety issues regarding the chairs.

Daymond John brings things back to sales and asks what kind of numbers they saw over the last year. They sold about 2,000 units for $39.99 each. To make one of these chairs only costs $7 dollars, which means their profit margin is pretty outstanding. They also have a patent for their product, which they had to take out a mortgage on their house to attain. However, they do not have any debt because they paid it back with the profit they made on the chairs. What they plan to do with the $50k is to get their brand out there and to enhance their website.

Despite what the Lenzes want, Kevin O’Leary believes that going into retail on their own would be a “slaughter fest” and Jeff Foxworthy thinks it would be a good idea if they licensed the chair idea to a luggage company so that they could build the chair into a suitcase itself. Darryl argues that someone is less likely going to want to buy a brand new expensive piece of luggage when they could simply buy a more affordable attachment instead.

Bringing the conversation back to numbers, John asks what their inventory currently looks like. As of right now the Ride-On Carry-On is sold out with 2,000 orders in pending. So they definitely have some sales already lined up, but Foxworthy steps in to say that even though they have a great idea, this isn’t the kind of business he is really familiar with so he can’t invest for that very reason. Next to make his decision is Herjavec, who believes that what they need is not an investment, but rather a licensing deal with a luggage company.

Barbara Corcoran is the first to put an offer on the table. She is willing to give them the $50k for the 25% eq 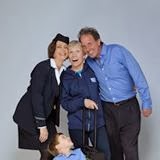 uity, so long as they make the brand name “big and bold”. Corcoran agrees that this should be a catalog or retail product and not so much a licensed deal. Herjavec kind of mocks her, stating that her negotiating skills
are spot on as she gives them exactly what they asked for. She just seems to shrug the comment right off because she believes that the product has some real potential and that all they need is some help with marketing. O’Leary puts up a counter offer, stating that he will give them the money for 20% equity, so long as they stop selling the chairs on a retail market and instead find two of the top luggage company that take up 80% of that market. After Corcoran and O’Leary try to make their cases and appeal to the Lenzes, the pair ultimately end up decided to accept Barbara’s deal. That means the couple walk away with the exact offer they walked in looking for.

After appearing on the show, the deal with Barbara Corcoran went through and the Lenzes got the publicity they needed. With the money they received from the deal, they produced more of their product to fill their 2,000 orders and get their name out there. Corcoran managed to make back all the money she invested and then some as the Ride-On Carry-On exploded on the market. Their product is now being sold in both the U.S. and over seas. In addition to being found in stores, these attachable chairs are also sold through their website (https://www.rideoncarryon.com/). Ride-On Carry-On has become a marketing sensation and one of the most successful products to have ever been aired on Shark Tank.