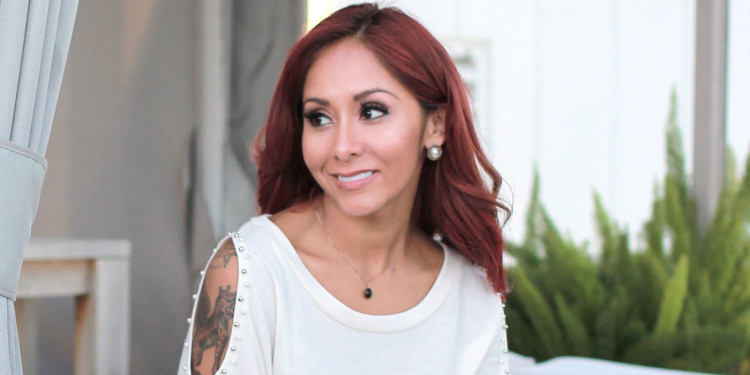 Named for a character from “Save the Last Dance” Nicole, Snooki, Polizzi rose to prominence on the MTV reality show “Jersey Shore”. She was one of the breakout stars from the show. Since “Jersey Shore” she has been spun off in to her own show, co-starring with “Jersey Shore” alum JWoww. “Snooki & JWoww” ended in 2014 and since then she has diversified into all kinds of areas, podcasts, perfume and even books. So what is she doing these days?

Snooki was born on November 23rd 1987 in Santiago Chile. She was adopted by Italian Americans, Andy and Helen Polizzi, living in New York. Since she was an infant when she left Chile she has never learned Spanish and instead embraced whole-heatedly the culture of her parents. As a teenager she got the nickname Snooki from her friends. Taken from a male character in “Save the Last Dance” because she was the first of her peer group to kiss a boy.

She first hit our screens in 2009 on the short-lived MTV reality show “Is she Really Going Out With Him?”. The show purportedly depicts beautiful women dating obnoxious guys. She and then boyfriend Justin Nolastname appeared in episode 14. Six months later she returned for “Jersey Shore” and a mildly annoying star was born.

She quickly established herself as a wild child, getting massively hammered in the first episode and jumping into the hot tub with the guys for a risqué hang out session. Such was her popularity on the show that she was one of the most worn Hallowe’en costumes in 2010. Her initial per episode fee of $5,000 was raised to $30,000 for the subsequent seasons. She was attacked early in the show’s run by Brad Ferro. The punch caused a spike in her appearance fees, no doubt fearing more public retribution. Brad was suspended from his job as a Gym teacher, shuffled around various teacher organizations and eventually fired. He found it so difficult to get a job after that he enlisted in the military.

“Jersey Shore” ended in 2012 after six seasons. Snooki and co-star Jenni Farley signed a contract for a new show immediately after. It was the second “Jersey Shore” spin off. They called it “Snooki & JWoww”. The first season was set in Jersey, but negative public opinion caused a move to New York after shooting ended. The show ended in 2014. Snooki has since appeared all over the place. She was a presenter on the CMT Music Awards, appeared on the TLC reality show “Cake Boos”. In 2013 she was a contestant on the 17th season of “Dancing With the Stars”, in which she placed 8th.

She released a book in 2011, “A Shore Thing”, which sold poorly in spite of the strong promotional push. She lectured at Rutgers University to an auditorium of 1,00 people on the nature of modern celebrity in the post reality television world. She released her second novel in October of 2011, it sold slightly better than the first and released a third in 2012. She won an award in 2011 for her appearance on the WWE, where she wrestled in a three-way tag match.

She married Jionni LaValle in 2014, after having met on the third season of “Jersey Shore”. There were unconfirmed reports in August 2015 that an account under his name had been found among the Ashley Madison leaks, though the couple has since denied any cheating. They have two children together.

These days she works on her website where she, or some copy monkeys like m’self, writes articles on celebrity gossip and updates us on her own life. Snooki and JWoww have been pitching a new show, this time showcasing their family life and arts and crafts. The show debuted on YouTube but they are in negotiations with another online distributor. She also uploads other videos on her YouTube, on her kids in general and sometimes featuring former “Jersey Shore” stars.

She regularly releases a podcast on her own life and celebrity news with friend Joey Camasta, and has claimed that she is in negotiations for a new reality show. Her new book “Strong is the New Sexy” was released on December 22nd.

In more recent news Snooki, and her partner in crime JWOWW, have been starring in a new series on GO90, called Moms with Attitude. The pair are raising children and balancing their work life, and has proved to be a minor hit. In addition Snooki is a featured contestant on the new season of Celebrity Apprentice. Arnold Schwarzenegger hosts the show, and after a shakey performance early on, she is coming back with a vengeance. Should be a packed year for the former MTV reality star.