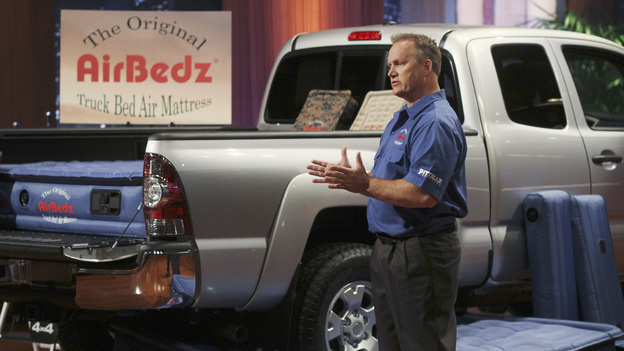 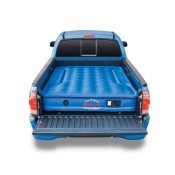 In this season three episode, California entrepreneur Jim Pittman is attempting to sell the sharks on his new outdoor product Airbedz. Airbedz are inflatable air mattresses specially designed to fit the in the bed of a truck, with cutouts to accommodate the wheel wells in the back. Two different sizes are available to accommodate eight and six foot truck beds. Pittman is on the show looking to secure a $250,000 investment in exchange for a fifteen percent stake in his company.

Airbedz are constructed out of heavy duty durable fabric, and contain a built in twelve volt air pump that can both inflate and deflate the mattress quickly and efficiently. The battery for the pump is removable, and can be recharged from a wall outlet or alternately from a cigarette lighter, for recharging on the road.

The sharks start out skeptical. Robert Herjavec is the first to question why there is a need for the product. Is there a market? Jim reassures the sharks that the outdoor sports market is a booming one, claiming that camping equipment is currently a fifty six million dollar industry. His product is already available in chain stores, sporting good stores, and is sought after by hunters, campers, and outdoor enthusiasts.

Barbara Corcoran wonders if it is hard to inflate, or if it would be difficult to manage for a woman on her own. Jim however reassures her that the battery operated pump does all the work, demonstrating its ability to inflate and deflate the mattress. He makes the claim that the product can be set up in two and half to three and a half minutes, depending on the size.

Kevin O’Leary asks Pittman what he intends to do with the money being requested, especially as he discovers that there are already four hundred thousand dollars worth of inventory sitting unsold in warehouses. Pittman says that the money is needed to build staff, to help sell the mattresses that he already has in storage. He has up to this point been running the company predominantly on his own, and wants to invest in more employees to help expedite the process.

This however raises some concerns for the sharks. Kevin is still worried that people don’t need it, and suggests that the small market might not be worth investing in. Daymond John adds that the relatively low sales figures are even more worrisome than they seem, given the market contains no serious competition. Mark Cuban says that there is a market, but that Jim is unable to sell to it. He asserts that if it was his own company, he would be working far harder to actively sell the product, instead of waiting for it to sell itself. Perhaps Pittman is not trying hard enough? Mark is out. Kevin agrees, as well as being still unconvinced that there are buyers. Jim is unable to argue his case, and Kevin drops out as well. Likewise, Robert finds Jim’s case unconvincing. Robert agrees that the product has potential, and that there is perhaps a market for it, but that Jim is not working hard enough to realize that potential. He drops out. Daymond follows suit, expressing concern that the business is perhaps still in a formative testing stage, and that he is not interested in investing in a company that is not ready to produce sales. He is out as well.

As everyone else has declined Jim’s offer, Barbara is very nearly convinced. Barbara loves the product, and is convinced of its marketability. She inquires about patents on the product, and Pittman assures her that he has four separate patents on the mattress. Barbara is close to getting on board, but worries about Jim’s abilities as a salesman. How will more money enable Jim to make more sales? Jim continues to claim that having more salespeople on staff will increase sales.

Against the advice of Kevin, Barbara makes an offer for Jim. Barbara offers to invest the full $250,000 in his business, but instead of taking a 15% share of the company, she wants 50%. She wants to take over the sales, suggesting reaching out to an international market, and selling the product on QVC.

Jim refuses immediately, not wanting to give up that much of his business. The sharks are shocked. Mark even tries to re-frame the offer, to make sure that Jim understands what he is turning down: “She is saying ‘I’m going to come work for you full time’, because you cannot sell, but she can…That’s a no-brainer.”

Jim however still refuses. He makes a counter offer of a twenty five percent stake in the company, which draws laughter from the sharks. But Barbara insists that she will only invest for a fifty percent share. Jim declines.

Barbara calls him a fool, commenting that she could sell “hundreds of thousands” of the mattresses. Kevin is happy for Barbara, convinced that investing in Pittman’s business would be a financial disaster. 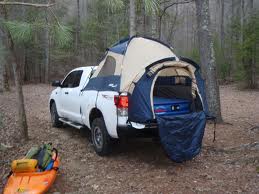 Jim had the opportunity to grow his business exponentially with Barbara’s help, but he was unwilling to give up enough control to do so.

Now in 2018, Pittman Outdoors is still an active business, selling the Airbedz in several different models. They also sell inflatable coolers, inner tubes, and other inflatable recreational devices, as well as accessories for the Airbedz themselves. Their products are available in stores as well as through online retailers. Considering the number of stores carrying Pitman’s product it seems that the Sharks may have passed on a good thing. The majority of the Sharks argued the point of his salesmanship, arguably unimportant considering what the Sharks are there for. It seems that his business will be around for a few years to come.