The Ave Venice Update – See What Happened After Shark Tank 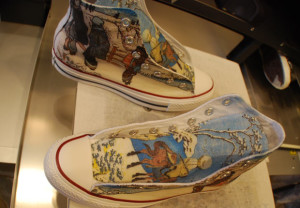 Nick Romero is a resident in Venice Beach, California and he is a man who has a lot of hometown pride. However, it wasn’t until he took a trip to Chicago that he found a way to express this love. While he was on vacation, Romero stumbled upon this shop that made custom t-shirts. The artwork that was available in this shop was all iconic local designs which gave it a bit of an edge. Romero then decided that Venice Beach was also in need of its very own custom shirt shop. So he set out to purchase his own shirt printing machine. Once he acquired it, Romero spent at least two years modifying it and he changed the software so that it would allow him to print custom art designs on sneakers in addition to shirts.

Once his shop was set up, The Ave Venice did receive quite a bit of attention. Customers loved that they were able to come into the shop with their own artwork and then have it printed on a shirt or a pair of shoes. He has done pretty well for himself so far, but Romero wants more for his business which is why he decided to take it to Shark Tank. He wants to lock in a partnership not only for the monetary investment, but also for the business expertise from one of the Sharks.

Romero enters the Shark Tank seeking a $125k investment in exchange for a 15% stake in his business. He then begins explaining to the Sharks that today’s generation of young people are living in a world of technology and are desperately trying to find ways to express themselves through art, music, and especially their clothing. That is why he took it upon himself to start up The Ave. He wants to create a retail chain of stores that will make it easy for people to print their own artwork and designs onto clothing so they can make visible statements about themselves.

The most popular form of self expression via clothing is by getting images printed onto shoes. Romero demonstrates how this process works by taking two Shark Tank images and then within seconds he has a pair of Shark Tank sneakers to show the Sharks. The printing process which allows this to happen is currently patent pending, which gives him a bit of an advantage against other competing printing shops. He modified a standard digital printer and created different templates for different shoe styles which makes the whole printing process possible. And all inventory at The Ave is blank, which means designs are only printed once a person has come in and placed and order. Sales made online are done in a similar fashion.

On average, shoes sell for around $100 each, which includes the cost of the shoe itself in addition to the 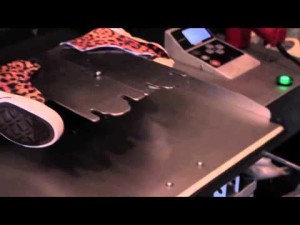 custom design. The production cost weighs in at around $27-28 which makes his margins look pretty impressive. In addition to that, his machine can print on virtually any style of shoe and any size because of the templates he has made. This process takes about 30 minutes to complete, which makes everything quick and easy. Romero wants to take this new technology to new locations around the world. He wants to have a store in every large city, but Kevin O’Leary can’t seem to find much sense in that. He believes that The Ave would be better off as an online only type of business. Romero counters this by saying even though the store he currently runs is small, he’s made around $570k since opening it up last year, and the profit he made off of that was $150k.

Daymond John wants to know how he plans on franchising then, which Romero tells him will happen in 3 phases. The first phase has already been completed since he has a small store already. The second is to move to a larger location and release the new styles of shoes that his machine is capable of printing on. Lastly, he wants to make more of the printing machines and begin franchising in other locations. However, it costs around $55k to make just one of them, which is why John believes that he should be licensing this technology to other businesses. Romero doesn’t really listen to this suggestion because he wants to make this business his own and later talks about how he might be interesting in licensing images, but John isn’t convinced. He states that he has gotten into business partnerships with “cool guys” like Romero and ultimately ended up broke because of them. It is because of his own bad personal experiences that he decides not to give him an investment.

Following after John, Mark Cuban admits that he agrees with all that John said. It is true that what Romero has is a very cool idea, but the smart game plan would be to make a profit off of licensing the technology to other businesses and continue running The Ave for his own entertainment. Robert Herjavec chimes in to say that he also agrees, but in spite of that, Romero is still only “looking at the smaller picture”. Herjavec isn’t all that interested in attempting to change the business model that Romero has in place, so he decides not to waste his time and drops out.

In an attempt to regain the interest of the remaining Sharks, Romero cuts straight to the chase by telling them he simply wants to “make a ton of money”. It has gotten to the point where he is no longer even in The Ave store that he owns. He has multiple employees working for him while he goes out in search of new opportunities to help the business grow and earn him a bigger profit. Having a partnership with one of the Sharks is crucial because he needs the experience to help him get things moving along. Romero hopes that this love for money and business will appeal to O’Leary, but it doesn’t. O’Leary states that he doesn’t like getting involved with retail, so he’s not going to bother putting an offer on the table.

Next to speak is Barbara Corcoran who enjoys his overall enthusiasm, but she doesn’t think that he has really been listening to the advice that the Sharks have been giving him. According to her, all of what they said has been falling on deaf ears because he is too set on the idea of turning The Ave into a retail business. Like the other Sharks before her, she doesn’t think that there is any real money to be made in making this a retail brand, so she drops out and that leaves Cuban as Romero’s last hope of making a deal.

Cuban asks how Romero has been paying himself with the profits made so far, and Romero gives a confusing answer that doesn’t seem to sit right with Cuban. If an investment were to be made, Cuban wouldn’t want some of it to be put in his pocket while the rest of it went towards the business. Romero assures him that it would all go towards the business and he would only start paying himself once the new retail locations started to generate a good profit, but what happens if they flop instead? Cuban just isn’t convinced that Romero has the passion to work because he has already become complacent with where the business is now. Since he started “living the LA lifestyle” and stopped working in the store, Cuban doesn’t think that the drive to work hard is there. If that hadn’t been the case, it would have been likely that a deal could have been made, but right now Cuban just doesn’t believe it is worth the risk. Now, with all of the Sharks out, Romero has to walk away from the Shark Tank with no new investors and a handful of advice instead.

Even though Nick was unable to convince the Sharks that his business was worth investing into, he still managed to make a name for himself and The Ave Venice. In fact, Romero is now an extremely popular designer who has a prestigious list of clients. There is a long list of celebrities that have become fans of his apparel such as Nick Cannon, Aaron Paul, Johnny Knoxville, and many more. In addition to having top-dog celebrities adorn his clothing, there have been numerous articles written about his products. The Ave Venice has been featured in Rolling Stone, MTV, and Wall Street Journal.

If you are interested in seeing what the rave is all about, you can visit http://www.theavevenice.com/, their official website. The Ave Venice also has its own Facebook and other social media accounts where you can see what the business is up to now. One thing’s for sure though; Nick Romero will probably continue to be a huge success in today’s culture and the Sharks are all probably feeling a little foolish right about now.