What Happened to Xkit – Where to Get it Now 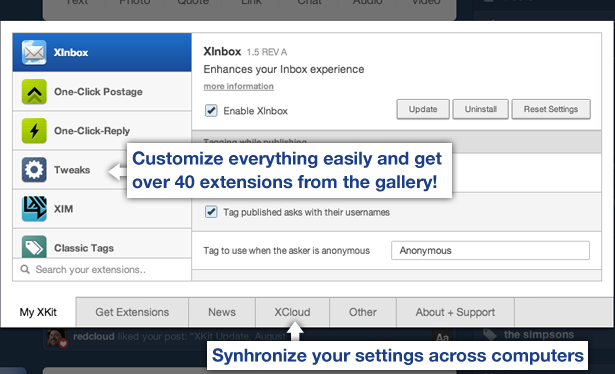 With the conception of the internet, countless number of social media and online apps have come forth as our phones buzz and ding with new notifications about our online presence or lack there of. From Twitter to Facebook to Instagram to Tumblr, there’s a social media for everyone.

Whether you like sharing pictures with friends on Instagram or keeping in touch with family and school friends on Facebook there is some form of social media that will suit your needs. While there are countless social media and online apps available there are an equal number imitators to the ones that dominate the online media market. These social media giants have a clear grip on our society with millions of millions of viewers. Being utilized as forms of expression, communication, and individuality it is clear that the presence of online media isn’t going away soon.

So if you can’t beat them, join them. With thousands joining each day you can get connected to people around the world in a matter of minutes while expressing who you are. One social media website that is prime to help you accomplish this mission is the ever popular blogging site Tumblr. With millions of members, Tumblr is the place to go for self expression while finding things you find enjoyable whether it is fandom posts or just quality information.

What is Xkit – Tumblr Browser Extension

Tumblr, for those that do not know, is an online social media website revolved around users who create a blog under their desired username. From there users can post a variety of content from pictures, gifs, videos, music, links, and text posts to help further express who or what they are all about. Following a similar system to the ever popular Twitter, users can follow various blogs and show their happiness with posts by reblogging and liking posts from around the website. By reblogging you share the desired post with all of your followers.

However the level of anonymity that comes with Tumblr is somewhat easier and desired with this blogging website. With some of the largest blogs on the site being titles “pizza” and various other inanimate food objects, Tumblr allows the user to be anyone or anything. Tumblr can be accessed from a web browser, iPhone or Android app, and a mobile web browser. With the level of versatility presented by the Tumblr team, it is no surprise that the website has garnered a large following of bloggers ready to share away. Users can design and redesign their blog to fit their expressive needs from a profile picture, blog text color, header, and a theme allowing for maximum expression and individuality.

With all of that being said surely the site has to have some things that are inconvenient. Something that just ticks the users off. Well thanks to Xkit Tumblr users can access a browser extension to help add functionality to their beloved Tumblr: or rather could have had access to. Once a popular tool amongst avid Tumblr users, Xkit had been the functionality many Tumblr users desired. Despite the overwhelming positivity and success had by Xkit, the service had unfortunately ended.

Let’s take a step back and look at the history of Xkit. As mentioned Xkit was a browser extension designed to offer Tumblr users more functionality and control to the website. Created by the man known mostly as “Xkit guy”, despite his name being Atesh, the service was extremely praised by those who had used it as it offered some functionality that just wasn’t there with the stock Tumblr overview. With over 40 plus features from adding a black listed words to a live spirit cat on your dashboard, Xkit was the tool that Tumblr users desired. But with all of the positive reviews Xkit had garnered, how could it fall out or end.

While many blogs on Tumblr are used for self expression and information, there is one blog that revolves around helping expose predators who use their Tumblr fame and power for harassment. With the creation to ensure that Tumblr users aren’t harassed and left helpless, this blog attempts to rectify some of the scum that try to use their fame for wrong things. This is where Atesh comes into play. Suspecting that Atesh may have had done inappropriate things with Tumblr users, the blog asked out asking anyone if Atesh had tried to do anything with them. While there seemed to be no evidence or reason why Atesh would do such a thing, the request seemed to be a “just in case” style post. Thus launching a witch hunt across the website. Finally just done altogether with the harassment they had received, Atesh had left Tumblr and announced that Xkit would no longer be updated. 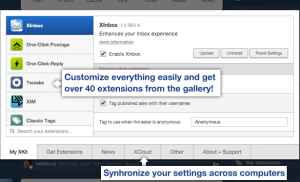 This news left many fans of the service crushed as the creator of the tool they desired and loved was stepping away from the project despite the immense level of effort and work that had gone into the project. While Xkit was still up and being updated, Atesh had created and consistently updated the service while being a full time student. The blog that had originally probed the questions regarding Atesh has since made a post apologizing, and seemingly trying to cover their own mistakes.

For those who are saddened by the news of no more updates for Xkit and fear they may never be able to experience what had once brought many Tumblr users great joy, fear not as you can still get Xkit. Despite Xkit stepping away from Tumblr and the project all together, the browser extension is still available for download. Simply type in Xkit into your desired search engine and it will pop up as the first link. There you can go to download the tool for free; yes for free. After an unfortunate witch hunt regarding the creator of a much desired tool, the legacy and tool left behind was one of the most highly regarded extensions for the popular social media platform. While the tool will no longer be updated, it will still surely be used and cherished by many Tumblr users.