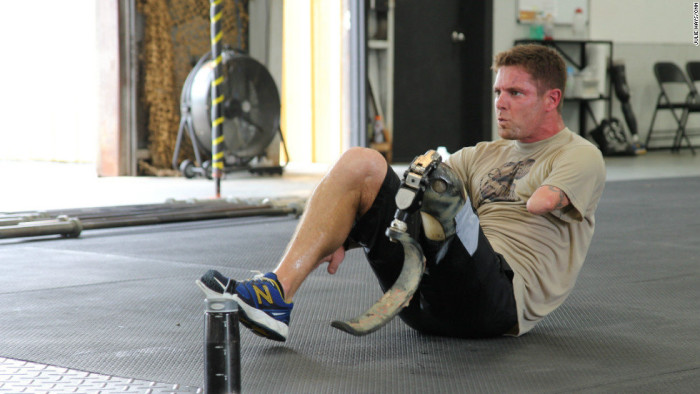 Most people probably couldn’t bounce back after losing an arm and a leg. Not true for U.S. Army Vet Noah Galloway. He has taken everything life has thrown at him and fought to become a model, fitness instructor and motivational speaker. 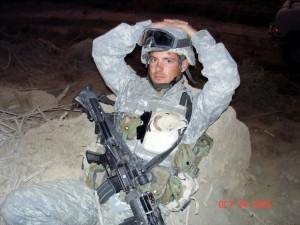 Noah Galloway was born on October 28th 1981 in Birmingham, Alabama. His parents are Bebe, a school secretary, and Andy, a construction worker, Galloway. Andy would suffer a similar injury to his son by losing his hand in an accident at a steel plant.

Galloway joined the military in 2001 and was soon promoted to Sergeant. He joined the Army as a result of the 9/11 attacks, and was inspired by his uncle had served in Vietnam. He found himself a member ofthe 1st Battalion of the 502nd Infantry, 101st Airborne Division in Kentucky stationed at Fort Campbell. He took part in Operation Iraqi Freedom. He suffered severe injuries from an IED during his deployment.

On December 19th 2005 in southern Iraq Noah Galloway entered the driver’s seat of a Humvee. He and three other cars went out on a night patrol with headlights off and night-vision goggles on. The visibility was poor, even with the NVGs, and he failed to spot a trip wire stretched across the road. It detonated a bomb that sent his vehicle flying through the air to land in a nearby river.

He was knocked out and dragged from the wreckage with a hole in his jaw and his arm already missing. His squad mates thought he was already dead. Five days later he woke up on Christmas morning in Walter Reed Army Medical Center. Finding himself a double amputee. After his initial anger had faded he found himself depressed. He credits the support of his family with helping him overcome this.

His battle with depression was a long one. He admits himself that it didn’t have to be, he kept it locked up for a long time. One day he decided he couldn’t concentrate on what he had lost any more. It was time to focus on what he still had, his three children, his head, his heart and a new will. He hit the gym for the first time in five years.

He got his life back together. He worked at it and trained hard eventually becoming a personal trainer. He began modelling in 2014, becoming the spokesman for Kenneth Cole’s new fragrance “Mankind Ultimate”. It was through his appearances with “Mankind Ultimate” that he came to the attention of Men’s Health Magazine. Due to his background he was actually the first reader chosen by the magazine to be featured on the cover and given the title “Ultimate Men’s Health Guy”.

In early 2015 Noah Galloway was a contestant on the 20th season of “Dancing with the Stars”. In a segment where they had to reveal a secret he spoke the attack that took his arm and leg. The emotional story was witnessed by his parents, in the audience. He placed third in the competition overall and captured the hearts of America while proposing to this girlfriend Jamie Boyd during the semi-finals. 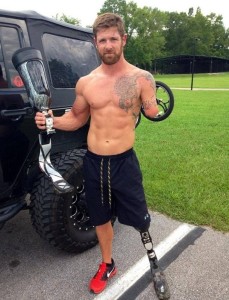 What is Noah Galloway Doing Now in 2018?

Last year Noah started the “No Excuses Charity Fund”, buoyed by his success with “Dancing With The Stars”. The charity funds projects that Noah Galloway feels are important, such as Operation Enduring Warrior and local Alabama programs.

These days Noah is a much sought after motivational speaker, appearing all over the country. He has plans to scale Puncak Jaya in Indonesia. Sadly in October he announced the cancellation of his engagement to Jamie Boyd. He also has plans to release a book at some point in 2017.

Unfortunately Noah broke with his fiance, over a frank conversation regarding future children. The veteran is already having a hard enough time juggling his appearances and being a father to one child, and does not believe himself capable of adding anything more to his already stacked plate. A sad thing to see, but i don’t think anyone can blame him, and his sense of personal responsibility should be applauded.