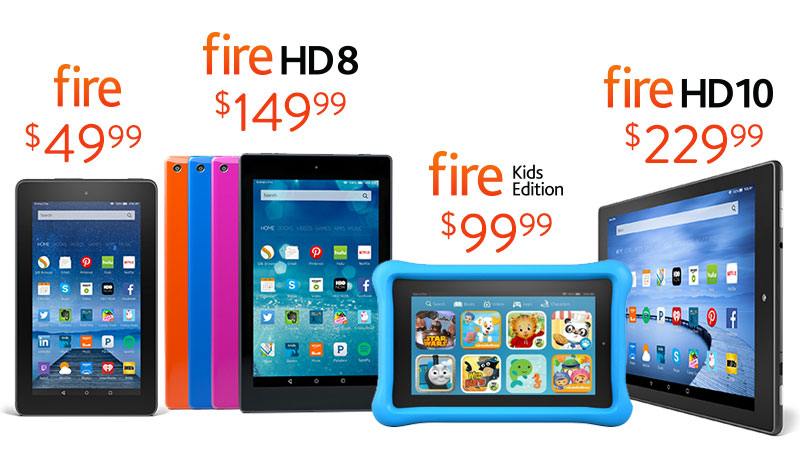 On the surface, the current line of Amazon’s Kindle tablets seems to hold a lot of similarities, with few distinguishing features between the Fire and the new Fire HD 8. But between price, screen size, resolution, storage and battery life, there are numerous ways in which these tablets differ. So let’s dive into the specs of these devices so you can make the best choice for your personal tablet needs.

In comparing a tablet that retails for $49.99 with one that goes for $149.99, some of the differences are going to be obvious. The Kindle Fire HD 8 isn’t expensive when compared with other tablets on the market in the range, but it does cost three times as much as the Fire. This price difference comes with the kind of quality differences you would expect. The HD 8 has a bigger screen, a slightly faster processor, higher-resolution output and better battery life. The difference in the resolution of the screens becomes very apparent when you put the two devices side-by-side. The HD 8 is whiter when presenting websites, looking like a piece of paper while the Fire takes on a slight yellowish look. Also notable is that even though the HD 8 has a bigger battery, more durable construction materials, and is bigger in size, it is somehow lighter than the Fire. This is probably owing to its thinness; it is one of the thinner tablets on the market right now.

As mentioned, the Fire HD 8 is of much higher-quality, durable construction than its cheaper counterpart, taking cues from higher price point tablets like Samsung’s. It also has two speakers, balanced on the lip of the tablet to provide strong, balanced sound that is rarely muffled. By contrast, the Fire has a single speaker and it’s not placed as conveniently, so if you rest the tablet at certain angles, the speaker is covered and the sound is muffled.

A lot of this description doesn’t seem to bode well for the cheaper Fire device, but the truth is that there are enough similarities to make the Fire a good buy if you’re willing to sacrifice a some specs. Both devices run identical software, Fire OS 5 Bellini,  so your actual experience in navigating different screens and applications will be very similar no matter which of the two you choose, just at different speeds because of the difference in processors. Also, both have a microSD slot, the same amount of RAM, and they have similar battery lives, with the Fire HD 8 providing about one hour more of battery time with moderate usage.

There is no doubt that both of these tablets are playing the price game well, but which is the best? There are also two options I haven’t touched on, the Fire HD 6, which retails for $99.99, and the most expensive option, the Fire HD 10, which goes for $229.99. These devices cover the ground you’d expect, with the HD 6 providing a middle ground between the cheapness of the Fire and the relative superiority of the HD 8. The HD 10 doesn’t seem to be very good value unless a bigger screen is really important to you. Looking at the specs side-by-side, it doesn’t offer any improvements to the HD 8 except for its larger size, so it seems hard to justify a price difference of $80.

If you’ve never tried out an Amazon tablet, it’s important to remember that they vary wildly from something like an Android tablet in terms of style. Its operating system is largely based around the online retail service, from shopping for physical products, to Kindle media like books and music, to its Amazon Prime services. Also present is Amazon Underground, which provides a huge amount of free apps. On the other hand, with an Amazon device there is no intuitive way to access your Google apps, so you won’t be able to comfortably use YouTube, Gmail, Google Maps, and others. You also won’t have access to the Google Play Store, so if you want to have access to the most apps possible, you’ll probably want to avoid Amazon tablets altogether.

The best buy of the bunch, when one factors in price vs. features, seems to be the Fire HD 8, but if you cheap out and get the plain Fire you’ll can expect a good tablet experience even at the very low price. You can even buy three Fires and duct tape them together, making a 21′ super tablet for only $150.