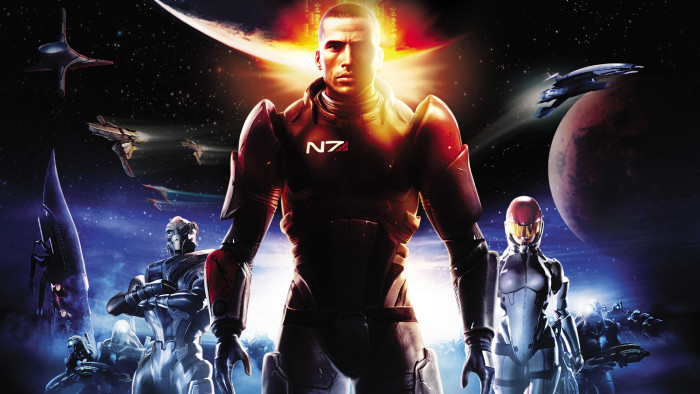 I’m Commander Shepard and this is my favorite article on the Gazette Review.

In the year 2148, explorers on Mars discovered the remains of an ancient spacefaring civilization. In the decades that followed, these mysterious artifacts revealed startling new technologies, enabling travel to the furthest stars. The basis for this incredible technology was a force that controlled the very fabric of space and time. It was called The Mass Effect. As far as space travel conceits go, Bioware’s Mass Effect has a great one. The games have a rich, densely packed galaxy of internally consistent alien civilizations, even if they do veer into Planet of Hats territory occasionally.

Bioware’s spiritual successor to Knights of the Old Republic, the Mass Effect trilogy is something almost unique in gaming. A trio of excellent titles where your actions in the previous games have impact on the subsequent games. A neat trick if you can pull it off. The degree to which it can be said Bioware succeeded is up for debate. I would at least argue that from the beginning of the first game to the middle of the last game the choices the player made felt impactful. The marriage of Western RPG and third person shooter was a gutsy move, and one that didn’t quite pay off in the first game, but by Mass Effect 2 they had gotten the gunplay right, even if they skimped on the RPG bit.

In the games you play the immortal space hero Commander Shepard, first name player choice because everyone calls you by your last name. You even get to pick the gender, which is a nice touch. I played through the games as a female Adept Shepard. Adepts can use magic powers similar to Jedi in the Star Wars games. I would advise you play through the games as a female Shepard simply because of Jennifer Hale’s stellar performance surpassing that of Mark Meer.

Each game has its strengths and weaknesses, which is why I would always recommend them as a group. the first game had better Role playing options, but the combat was merely functional, not to mention the reusing of assets all over the place. You could customize your Shepard’s armory wonderfully though, weapons, armor, ammo types, weapon mods, so many options. Mass Effect 2 nailed the core combat, but we lost customization options, no armor change, set weapons etc. The story was a little better, but there wasn’t as much of it, though what there was had more attention to detail. Mass Effect 3 had fewer story options, what with being the conclusion of the series, but the combat was the same as Mass Effect 2’s and it had a few more RPG options. No one game in the series is perfect, but together they form something special.

Let’s take a look at a few other games that are similar to the Mass Effect Trilogy.

The game that inspired Bioware to make Mass effect in the first place. The team behind Mass Effect felt stifled by working within an established Sci-Fi universe. They felt that they could not tell the story they wanted to tell when constrained by so much canon. So they used the lessons learned in making KOTOR when building their own universe. The differences are plentiful. Where Mass Effect is a real time shooter, KOTOR is a pseudo-real time with pause, Dungeons and Dragons based game. The story design is very different as well. Bioware felt that they needed to not only make a good RPG, but also make a good Star Wars Story, and honestly KOTOR 1 has one of the best plot lines of the entire Star Wars Universe.

The roots of the Mass Effect games can still be felt here though, and if you’re looking for something similar to them then you can’t go wrong with KOTOR. But you can go more right. Where Bioware felt constrained by the source material when penning their story, the Obsidian developed sequel, KOTOR 2: The Sith Lords, was under no such restrictions. The game reads more like a deconstruction of the fundamental morality of the Star Wars series. With the game calling into question the black and white, good and evil bias of the force. The game has better writing, better characters and contains Obsidian’s trademark bugs and glitches. Be sure to install the restored content mod for the complete experience.

Coming in two different generations, the Deus Ex name is synonymous with RPG shooter perfection. The first game in the series is a masterpiece of game design, a little dated these days but far from unplayable. The second game, Invisible War, received criticisms for its console friendly designs, smaller environments and cliche story. The series went into hibernation for a while, before reemerging in 2012, developed by Eidos Montreal. Human Revolution was more of an FPS with RPG elements than an RPG/FPS blend but it still managed to be an excellent addition to the series.

Human Revolutions combat was tight, its world was well constructed and the moral questions asked by the game were difficult to answer. The game was a tour de force, but out-sourced boss fights, and a corridor-esque finale prevents it from being any higher on this list. We can hope that the forthcoming Mankind Divided improves upon the issues in this game, while still being an excellent example of a game like Mass Effect.

Bioware’s attempt to recapture the magic of the Baldur’s Gate series outside of the Dungeon and Dragon’s rule set has been something of a mixed bag. Where the first game in the series was a critical and commercial success, its sequel, Dragon Age II, was significantly less so. The first game’s story was terrific, its setting was fleshed out and interesting, and the moral choices presented are a match for anything Mass Effect throws at the player. So the question becomes, How did the sequel go so wrong? The combat was simplified, though it could be argued that it was streamlined, and the story, while engaging, was ultimately less interactive than its predecessor. Thankfully the issues that fans of the series had with its sequel were addressed in the third game in the trilogy: Dragon Age: Inquisition.

Inquisition received wide spread critical acclaim upon release. It kept what worked from the previous two games but was able to forge its own path. Creating a game unshackled by the restraints of the past whilst still paying heed to them. The plot is both memorable and has wonderful moral choices throughout. If you’re looking for a game like Mass Effect but in a fantasy environment, then this trilogy may be the one for you.

The Fallout series comes in two flavors. The original open world isometric RPGs and the first person open world RPGs. All of them are well above average experiences. In the original two games the world is described to you, the quests are well written, the plot is filled with morally ambiguous choices and post game you get told how your actions affected the various people and places you interacted with throughout the games. The combat is easy to break, and the beginning of the game may be a little difficult, but the spirit of the game, the world building and the sheer breadth of options available to the players is nothing short of staggering. If you don’t mind low res graphics then this is the world you want to inhabit.

Moving on the FPS games in the series. Fallout 3 was made by RPG legends Bethesda. While they may not have captured the spirit of the series, they certainly made a valiant effort. The combat is a little weak, and a few of the quests are lackluster, but the world is interesting to explore, and there is the occasionally stellar quest in the game. The 3d series hits its peak with Fallout New Vegas. The plot is excellent, the combat has been tightened up, though it is still not great, and the attention to detail is nothing short of breathtaking. Fallout 4 shares much of the same issues as Fallout 3, but now with fewer hand designed quests and a black and white morality masquerading as shades of grey. If you’re looking for an excellent RPG alternative, in meticulously detailed worlds, check out every Fallout game.

Number one. The Witcher trilogy offers player choice that carries over to the next games in the series. It has a huge, detailed world, with political intrigue, old hatred and bitter rivalries. The combat is real time and the quests are all tightly designed and well scripted. In other words, this game shares more similarities in design to Mass Effect than any other games series on this list. While the Witcher III: The Wild Hunt is considered to be the best in the series, I have talked about it extensively in two other articles. So I’m going to talk about my favorite game in the series. The first one.

The first Witcher game is designed around its limitations. It was developed in the Aurora Engine, created by Bioware for the KOTOR series. The world is split into several detailed sections and the NPCs tend to repeat but the attention to detail in the lore and world building has yet to be matched by another game. I was particularly impressed with the load that Geralt could carry in the game, four weapons, small items of value and various monster innards. Realistic, but abstracted. The choices made in the first game carry over to the second, and again to the third. Play through them all, make your own Geralt and experience a world where the right choices can lead to horrible consequences.

So there we are, five games like Mass Effect. Each game on this list shares in Mass Effect’s longevity and core genre. If I had to pick a personal favorite I would have to go with Fallout. Something about the retro-futurist aesthetic is infinitely interesting to me. I would still recommend you play all of the game series mentioned here. If you have a game that didn’t make the cut, leave a comment below.