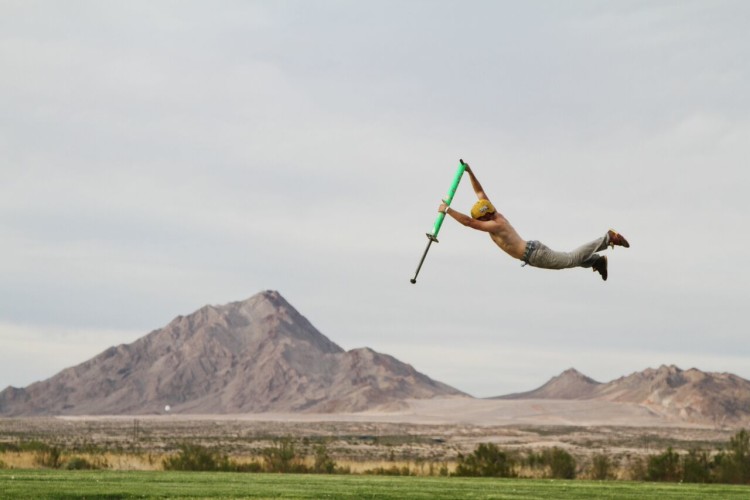 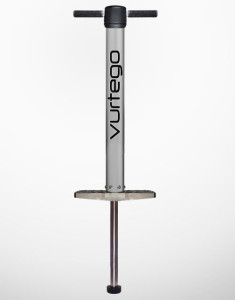 Think back to your childhood, do you remember soaring high on a pogo stick? You know, that metal pole with handles on one end and foot pads on the other, powered by a large spring on the bottom. Like many of us, Brian Spencer enjoyed bouncing around his street on this childrens classic.

As a young extreme sports enthusiast and hopeful entrepreneur, Brian was looking to find the next big action sports trend. He always knew there was potential in the pogo stick concept, so in the late 90’s he began to experiment with ways to redesign the children’s toy into the high-flying extreme sports vehicle he knew it could be. At first, Brian tried to increase the size of the heavy metal springs to produce a higher jump height. Unfortunately, he found that as he increased the size of the springs the weight added resulted in a heavier pogo, producing no increase in bounce. Brian quickly realized that the traditional pogo stick mechanics were limited and simply not going to cut it.

Bringing the vision to life would require a modern update to the pogo technology. He didn’t have to look far for innovation as his dad, Bruce, a former Northrop engineer decided to take on the task. The duo teamed up to create and patent a unique air spring propulsion system. Their system resulted in the highest performing pogo sticks ever made. With this innovation, Vurtego Pogo was born.

Vurtego In the tank

Brian entered the tank surrounded by a high-flying crew of pogo professionals demonstrating huge aerial maneuvers and synchronized flips. The Sharks, immediately impressed, could not take their eyes off the athletes and began ‘oohing and aahing’.

Following the captivating entrance, Brian introduced himself and Vurtego Pogo. He came into the tank looking for $500,000 in exchange for 25% of his business. His company, he proclaimed, was at the forefront of an action sports evolution. He continued to entice the Sharks with a video demonstration of his Vurtego pogo stick in action on different obstacles and terrains. Robert in particular, couldn’t contain his excitement and kept chiming in enthusiastically.

Predictably, Kevin immediately started questioning his numbers. Brian said he sold over 7,000 Vuretego pogo sticks. Kevin was amazed and asked, “has nobody been hurt or injured yet?” Brian eagerly responded that no one had and it was because Vurtego pogo’s were “deceptively safe” as the users weren’t dealing with the high speeds typically associated with extreme sports, only the height.

Next, Mark wanted to know more about the business and inquired about the margins. Brian boasted his healthy margins stating that he produced the Vurtego pogos for $100 and sold them for $330, this seemed to intrigue the sharks, especially Kevin.

Daymond, concerned about the competition within the market pointed out that “obviously there are other pogo companies”. Brian conceded that there was one large competitor who currently dominated the market. The competitor’s products, Brian said, were inferior due to the limitations of their rubber band technology. Vuretgo, in Brian’s opinion, was on track to dethrone the competition as the world’s largest pogo stick manufacturer.

As his excitement started to settle, Robert questioned whether high-end pogo sticks were even a good fit for the mass market. He felt that the $330 price was too low for the specialty product, he wondered if it would make more sense to mark up the price and stick to a niche market. Brian quickly rebutted, confidently stating that in order for the company to make money, they needed to approach the masses.

Kevin was with Robert and agreed the right strategy would be to stay in his niche space and own it. In this space, he said, there would be fantastic margins and lots of money to be made. Entering the mass market would mean competing with the toy store behemoths which was a completely different strategy, one that Brian wasn’t equipped to handle.

The mutual critique continued as Mark sided with Kevin and Robert saying that Brian was falling victim to his success. Mark acknowledged that it might be tempting to target the mass market, but taking that approach would result in Vurtego losing it’s cool and hip appeal. Cuban implored that the mass market strategy would be completely unrealistic especially with only $500,000 to spend.

Mr. Wonderful beautifully summed up the tone of the tank arguing that none of the sharks shared his vision for the mass market and asked, “what’s the matter with you, don’t you see it?”. At this point, Brian couldn’t help but agree and changed his tune saying that the more expensive niche route was one that he himself was contemplating.

Barbara, a concerned mother of two brought back the safety concerns and said it was a miracle that no one had gotten hurt or even killed. Brian jokingly pointed out that it was actually important to the brand for the products to not be “mother approved”. Barbara reluctantly agreed but could not see past the liability and was out.

Mark, undeterred by the dangerous element of the product, reiterated his original point and said that bringing in investors, especially ones that look like Kevin, would take away anything cool about Vurtego. Brian, understandably flustered, said that he was surprised and had entered the tank expecting the sharks to share his mass market vision. He then tried to save the pitch by saying he was open to their suggestions. Mark interrupted shouting that was even worse, stressing that Brian should just be himself. He was starting to try and please everyone and in turn, pleasing no one. Just like that, Mark was out. Brian stood speechless.

Next was Kevin who didn’t care to dominate the pogo market, all he cared about was making money. The best way to do that, he said, was to “double the price and make an insane margin”, he was certain that action sports fanatics would pay the premium. It became clear that to Brian that Kevin wasn’t sold on the vision but more importantly, wasn’t willing to fork up the $500,000. O’Leary was out.

Daymond and Robert agreed wholeheartedly and despite their interest in the product and company, they too were out. 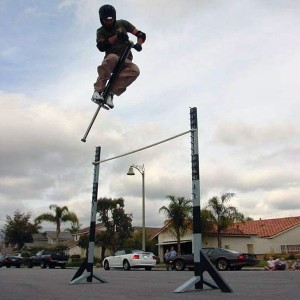 Brian walked out of the tank defeated.

After appearing on Shark Tank, Vurtego Pogo found funding by going directly to their users. They raised over $100,000 on the crowd-funding platform Indiegogo. While Brian did take some of the Shark’s advice, he did not follow the recommended niche market strategy and instead continued on his original affordable product game plan.

The incredible capabilities of the Vurtego Pogo stick spoke for themselves and Vurtego has seen an unbelievable amount of media attention since the tank. Brian’s company has been featured on dozens of mainstream television shows including Conan O’Brien, David Letterman, The Today show and countless others.

Although Vurtego did not secure an investment in the tank, they have been incredibly successful and it appears that the sharks missed out on a profitable action sports opportunity. Extreme Pogo continues to grow with Vurtego on the front line sponsoring top talent and creating superior products. It’s unclear what’s next for Vurtego but based on the attention and growth they have seen, the sky’s the limit.

You can buy the Vurtego online at Amazon.com by clicking here.