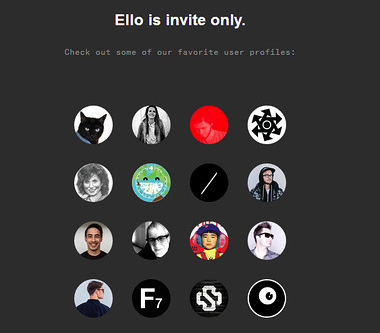 As our society’s relationship with technology goes from useful to dependent, it is no wonder that we are glued to our smartphones, tablets, and computers. From checking Instagram to retweeting our favorite tweets on Twitter, we are always online and connected to our fellow citizen in one way or another. When referring to forms of social media the aforementioned Instagram and Twitter are the top of the line, used by millions social media applications accompanied by Facebook. All of these applications burning with success off of their everyday mobile users. While you can go on Twitter and Facebook on your computer, it is far easier to just open up an app on your smartphone or tablet. Many companies have tried to garner the same amount of success as these social media giants like Google’s Google Plus.

Ello and Google Plus 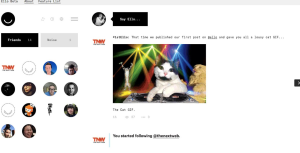 Created to be a competitor with Facebook, Google Plus was unsuccessful and is used by a relatively small number when in comparison to Facebook and Twitter. Many companies are interested in looking at how they can take the fame and success of Facebook and generate that type of presence for their own mobile application or online website. The problem that many of these companies face is getting enough exposure to the public. If no one knows about your website or app, how are they going to download it and use it consistently. That was the problem with the website that was supposed to end Facebook altogether, urging users to hop on and switch over; this was Ello. Under the mindset that all things must come to an end, Ello feels that it is time for Ello to shine while Facebook slowly dies out as the previous social networks have i.e. Myspace.

What is Ello Social Media Network?

For those who don’t know what Ello is, lack of exposure, Ello is an ad free social media network launched in March 2014 by Paul Budnitz and Todd Berger in a merger. As of right now the website is still in beta meaning that it is only usable to select members who have been accepted into the beta to help point out where changes are needed. Originally Ello started as a private network for 7 artists and programmers but after a year it went public; or the intentions of going public that is. In January of 2014 Ello had sought out $435,000 in seed funding from a venture capital investor FreshTracks Capital. With the money in their hand and the desire in their eye, the developers of Ello went to work. One of the reasons Paul Budnitz wanted to created Ello was because of his absolute hatred of advertising and data mining found in the big name social networks.

Get an Ello Invite

One of the many reasons why someone may not have known about Ello is the original creation of the newfound social network. Starting solely online, Ello had no mobile application for about half a year. This meant that a user would have to use Ello on their computer or bumble around on a clunky mobile view on the user’s choice of mobile web browser like Chrome and Safari. However the lack of a mobile application has changed in the past couple of months. As of June 2015 Ello has finally created a mobile application allowing for a seamless interface that pleases users who want to use Ello on the go.

So how does Ello plan to stick out from the current social network giants? First let’s look at the algorithm that Ello uses to view content. On Twitter you can see other people’s tweets through retweets so long as the original tweeter isn’t private. This allows you to see the content of millions of users across the world. Ello will change that. The way Ello works is that you have to follow somebody, like Twitter and Instagram. The difference is that if you don’t follow the user on Ello, you will never see any content that post unless you search and navigate to find them and follow them.

How Does Ello Make Money? 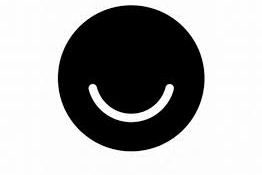 In order to stay in business, whether it’s a mobile application or a restaurant, you have to make money to “keep the lights on.” If Ello is a completely ad free website how are they going to make revenue? In a recent interview, Budnitz claimed that Ello is making money now even though it isn’t profitable. Selling Ello t-shirts since the start of Ello, Budnitz is confident that they will eventually make money pointing out how it took Twitter six years to make their first dollar. In addition to the t-shirts, Ello is looking to provide a service for commerce that will allow business to “advertise” their products through posts. Budnitz claiming that on Facebook businesses pay in order for 1% of people to see their ad. On Ello, if someone is viewing the businesses posts, it’s because they want to not because it is sidebar advertisement. Due to his hatred of advertisement and data mining found in current social media websites, Budnitz feels the the biggest social networks aren’t even social networks anymore. Budnitz saying, “Facebook is no longer a social network. It’s an advertising platform. Tumblr is no longer a social network. It’s an advertising platform. Twitter is becoming an advertising platform… We’re a social network.” 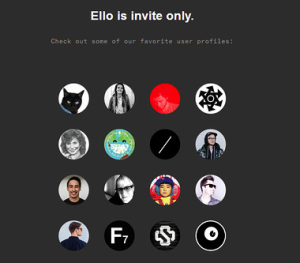 Budnitz looks at the creation of Ello like throwing a party or rather the best party ever. At first the party is going to be invite only but if you want to join, you get that invitation soon. If you don’t want to join the party than Budnitz says “go f— yourself.” With a strong attitude for success, Budnitz sees Ello being the next in latest and greatest social media platforms; a true social media platform where there aren’t advertisements soiling the user’s experience because honestly no one likes seeing advertisements. That’s why chrome extensions like AdBlock are extremely popular. Hoping to move forward out of the closed beta, be sure to keep you eyes peeled for the surface of Ello to see if it sticks or flops like the many previous social platforms that attempted to overthrow the throne that Instagram, Twitter, Tumblr, Facebook, and Pinterest sit upon.