God of War is a series of action-adventure games that follows a Spartan warrior named Kratos as he goes on a quest while brutally fighting off monsters and gods from Greek mythology. Each of the installments in the series heavily feature platforming, puzzle solving, and combat focusing on executing combos and using abilities.

If you are on a quest yourself for the next action-adventure game to play then check out this list we have prepared for you. 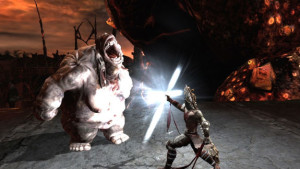 Have you ever imagined Kratos traversing the circles of Hell? Dante’s Inferno brings that to reality by putting you in the shoes of the crusader Dante as he goes on a quest to save the soul of his one true love.

The game has the usual platforming, puzzle solving, and foe slaying elements. As the game progresses Dante will learn new abilities and combos after paying with souls. The abilities will eventually split into two trees namely Holy and Unholy. Absolving or punishing enemies will provide Holy or Unholy experience respectively.  This is needed in order to access stronger abilities and upgrades on the corresponding ability tree. Important historical figures in The Divine Comedy grant more experience and souls.

Many people call this game a God of War clone due to many similarities. That might be the case for some people but don’t let it stop you from trying Dante’s Inferno out.  The gameplay may not be totally original but the experience is still one-of-a-kind. 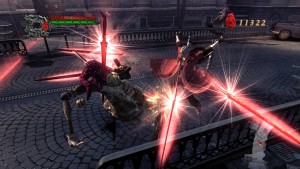 Capcom’s Devil May Cry series consists of five games with the most recent one, DmC: Devil May Cry, being a reboot.  It has the basics of an action-adventure game like slaying foes and solving puzzles as you traverse a linear path through the plot.

The fast-paced nature of the game allows you to attack quickly and dodge enemy blows. Combo-based combat is predominant in the series. How well you can chain combos when attacking enemies is tracked and then ranked accordingly from D being the lowest to S being the highest (the third game continues with “SS” and “SSS”). New weapons are added to your arsenal as you progress each with their own strengths and weaknesses.

The Devil Trigger is another recurring element in the series. This allows Dante and other capable characters to unleash their true potential which greatly enhances combat prowess and regeneration while unlocking new abilities exclusive to that form.

If you are planning on following the game’s intended chronological timeline then play the titles at this order: 3-1-4-2. Ignore the reboot if you wish. If you are really invested in the story then you should watch the anime series before playing Devil May Cry 4. 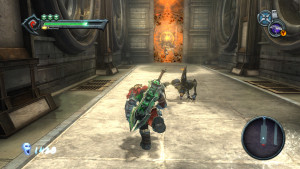 Darksiders puts you in control of one of the Horsemen of the Apocalypse namely War as he embarks on a quest to find the culprits that brought Judgment Day prematurely and destroyed mankind.

The game takes place in an open-world setting with many locations that can eventually be visited as War regains his lost power. A central hub is where War will receive missions. He will also obtain weapons and Wrath powers that help greatly in combat and survival. Ruin, War’s steed, will become available later in the game for better maneuverability.

Some boss battles are not direct confrontations but instead require some sort of puzzle-solving or a specific action in order to defeat them. Enemies can also be executed by War with the press of a button, and sometimes he can also use their own bodies as weapons against other foes. Souls are obtained upon slaying an enemy which are used to refill the health and Wrath bars. The blue colored souls are used to purchase upgrades and items.

Chaos Form allows War to transform into a large flaming demon for a short time, capable of dealing greater damage and bolstered with enhanced resiliency.

Its sequel Darksiders II puts the spotlight on the Horseman Death and its plot is concurrent with the first game. It aligns strongly towards the role-playing genre due to its leveling system with two skill trees that allow different builds. 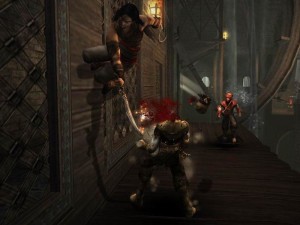 The Prince of Persia franchise started with a trilogy consisting of two 2D side-scrollers and the third being a 3D platformer but was critically-panned.

The second trilogy is what we will be talking about here. It begins with Prince of Persia: The Sands of Time where the titular unnamed Prince is tricked into releasing the titular Sands of Time which transformed the citizens into monsters. Yet the tragedy gives the Prince a boon in the form of the Dagger of Time which allows him to manipulate time itself. The two other titles are named Warrior Within and The Two Thrones. An interquel titled The Forgotten Sands bridges the gap between the second and third installments.

Core to the series is the navigation through trap-laden environments with the use of acrobatic abilities. The Dagger of Time allows the Prince to rewind time and save himself from a fatal drop. He can also use it to slow down time in order to properly land a jump or avoid a swinging blade. However these powers are limited and must be recharged by slaying enemies. Puzzles that make use of the environment are also a constant.

The first installment had basic commands for combat. The second and third ones greatly expanded it so you can chain combos and dual-wield weapons. Manipulation of time is also crucial when fighting enemies as it will allow you to dodge their attacks. The Prince also learns how to use the Sands of Time offensively. Forgotten Sands introduced elemental powers that can help in negotiating terrain and in fighting off 50 enemies simultaneously.

There is another Prince of Persia game released in 2008 that featured a different Prince. It has the core “pillars” of the franchise namely combat, puzzle solving, and acrobatics. The protagonist is paired with a female companion named Elika who helps him a great deal. That was the last 3D game for the series.

The second trilogy is your best bet if you are itching for a game like God of War. Trust me, it will not disappoint you. 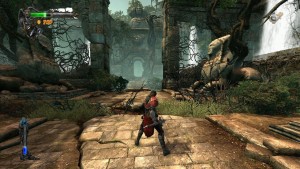 The Castlevania series of games were also predominantly 2D side-scrollers. The two releases for the Nintendo 64 (Castlevania and Legacy of Darkness) were the first to utilize 3D graphics. Many more 3D games in the series followed suit.

Lords of Shadow serves as the franchise’s reboot and takes place before Dracula’s rise to power. Combat in the game primarily focuses on a retractable whip called Combat Cross. Eventually it can be upgraded to grab enemies from afar or to fight multiple foes at once. Components found in the game give the Cross additional versatility both in combat and exploration. Light and Shadow magic augment defensive and offensive capabilities respectively. Secondary weapons such as holy water can be wielded as well.

The platforming aspect of the past Castlevania games is present in the reboot.  Difficult terrain must be traversed with balancing acts and timed jumps. The Cross can help by acting as a grappling hook or a swing when needed. Those who are explorative in nature are rewarded with secret areas that contain powerful items. There are puzzles in the game like arranging a passageway or directing an energy beam.

Two direct sequels were released afterwards. Mirror of Fate is a side-scroller and Lords of Shadow 2 which now has an open-world setting. The Shadow Whip is the new Combat Cross, and Void and Chaos replacing Light and Shadow magic. Weapons now have individual skills and can be switched even while in the middle of a combo. The more combos performed the more powerful the weapon becomes.

If you’re a fan of the Castlevania series ever since then you should try the reboot. There are many elements present in the game that will make you feel right at home.

Have you tried any of these games? Do you know other games like God of War? Let us know in the comments below.