The Caddy Girls Update – What Happened After Shark Tank

The Caddy Girls Before Shark Tank

Meghan Tarmey is a 2005 Costal Carolina University graduate who wanted more for herself than working a minimum wage job after graduation just to make ends meet. So instead of picking up a couple of shifts at the local bar, Tarmey decided to start her own business instead. What she came up with was an idea to provide golfers with sexy caddy service. 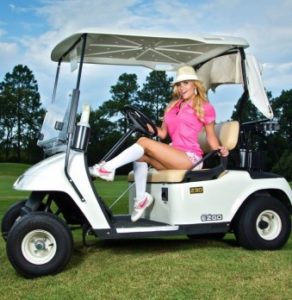 That’s right, Tarmey started The Caddy Girls with the sole intent of having these women drive golfers around from one hole to another. However, she also wanted to make sure that her business was as professional as possible. All women who work as Caddy Girls must be certified with the Professional Caddies Association. It takes more than just a pretty face to get a position in this business. In addition to being certified, the women must be generally educated in course etiquite, how to calculate field distance, and how golfing scores are kept. Tarmey wanted to provide golfers with more than just a driver who is easy on the eyes.

So far The Caddy Girls have markets in 13 different nationwide locations, one of which is based in Hawaii. They provide services for tournaments, bachelor parties, and other large events. To hire one Caddy Girl would cost $149, plus whatever tips the girls receive during their time working the venue. So far this business has been quite the hit at the few locations they are currently operating in, but Tarmey wants to take the business to the next level. She decides to head over to the Shark Tank, hoping that she can convince one of the Sharks to bite onto this new caddy service that she knows all golfers are going to love. All she needs is a bit of their money and experience to get there.

The Caddy Girls on Shark Tank

Tarmey enters the Shark Tank seeking a $100k investment in exchange for a 20% stake in The Caddy Girls business. She then tells the Sharks that her business is a female caddy service that is available for regular golf tournaments to large corporate charity events. Probably the most important aspect of the business is not just that these caddy girls are very attractive, but that they are also very knowledgeable of the sport itself. Tarmey wants to enhance the fun factor in playing golf, but she always wants to be able to maintain a high level of respectability.

The Caddy Girls service was originally based out of Myrtle Beach, but has now expanded to locations in Los Angeles, Miami, Orlando, and a few other areas as well. In the year of 2013 they made over $100k in sales, and in the last month alone they were able to bring in $34k. The lowest rate available for hiring a caddy is $149, and the girls make $100 off of that. During their time working, they service all holes played.

The idea for the business came to Tarmey when she was working as a bartender. The golfers who came into 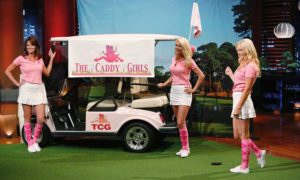 the bar she worked always tipped the best and were usually the most enthusiastic about seeing her. It then struck her that maybe it would be a good idea to turn this into a business, that way she would no longer have to work ridiculous bar hours and could be her own boss.

Robert Herjavec is the first to voice some concern about the concept. He does his best to word his question as respectfully as possible, but he ultimately wants to know if guys are hiring these girls as a professional service or just as something nice to look at while they play the game. Tarmey assures him that all girls who work at The Caddy Girls do everything that a professional caddy is supposed to do. They rake the sand pits and retrieve your clubs. Everything that would be expected of a typical caddy, you can also expect from one of these girls. The only difference is that they “look better doing it”.

So far this business has received a lot of recognition and have quite a few services lined up for the future. Four of the Caddy Girls are scheduled to work a televised tournament and later in December around 30-40 girls will be working a large corporate event. And the great thing about it is, half of their sales were made on repeat clients, so it is pretty clear that people are enjoying this new service. All she needs now is for someone to help her expand it to even more locations so she can really start bringing in the big bucks.

For the Shark Lori Greiner, she foresees a lot of potential issues for these girls. Sure, golfing is a big sport and men are always going to enjoy looking at beautiful women, but sometimes bad things can happen wherever alcohol is brought into the picture. For that reason, Greiner says this isn’t a business she could really get behind. Tarmey understand that harassment could definitely be an issue for her girls, but she has a strict code of conduct in place and states that harassment can really happen anywhere.

Mark Cuban takes his turn to speak and says that he really thinks that this business is something that Tarmey could “turn into something special”. However, he can not offer her an investment because he simply hates golf.  Then there is Daymond John, who also doesn’t enjoy golf, but he does think that Tarmey might have a good business idea on her hands. The only issue he sees is that, yes she needs to expand to different places because if she doesn’t, there is a chance that someone else might try to copy her idea. However, John also states that if The Caddy Girls start spreading too thin, it will be impossible to make a profit. So, as a result of this business needing too much time and effort in order to become successful, he decides not to make her an offer.

That leaves the Sharks Herjavec and O’Leary still in the tank. Herjavec admits to really enjoying the business that Tarmey has started, and he commends her for being able to start her business literally from the ground up. What is turning Herjavec off though, is that he believes The Caddy Girls is still in the “hustle” stage, meaning that they need to work every hour of every day to bring it closer to the “investment” stage. He doesn’t think that Tarmey did a good job of explaining how she plans on using the $100k to make this business boom, so he can’t offer her an investment today.

Finally, Mr. Wonderful is the only one left in the tank. Tarmey says that he is “perfect” for them, and O’Leary admits to being very impressed with her sales pitch. He thought that this was going to be a pathetic show when they first walked in, but he thinks she did a pretty good job of presenting to them. The most important question still remains though; is this business worth investing into? O’Leary has no idea how he would make his money back if he were to invest into it, but Tarmey insists that he would be able to make it back within 4 years because The Caddy Girls have been experiencing a growth rate of 30%.

O’Leary is convinced enough to finally make an offer.  He is willing to give them the $100k, but only if he is given 50% of the company. None of the other Sharks seemed to think this is a good idea and advise Tarmey to decline. She decides to make a counteroffer, asking him to go down to a 40% stake, but O’Leary is not willing to budge. So, after taking some time to briefly consider the offer, Tarmey decides not to accept. She believes that 50% is too much to give away when she has worked so hard to get this business up and running. After thanking the Sharks for their time and consideration, she walks away without an investment. 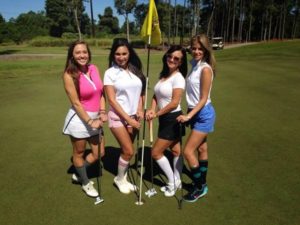 After appearing on Shark Tank, Meghan refused to give up on her business, despite the Sharks telling her that it just required too much work. She continued to have absolute faith in The Caddy Girls becoming a hit, which it did. Not long after the episode aired, The Caddy Girls business went up by 400%. Not only that, but their bookings have nearly tripled and the managed to book a few extremely prestigious tournaments since appearing on the show.

Having this sudden boom in success has allowed The Caddy Girls to expand to other locations in the U.S. They also have their own website now, http://www.thecaddygirls.com/. On this website, you can view all the areas in which the Caddy Girl services are available in addition to seeing the tournaments they have serviced. There is also a page where you can view the different Caddy Girls on staff. Clearly, this business has become a huge hit with the golfing community, and Tarmey was able to do exactly what she wanted with the business. She was able to start a business out of nothing, and build it up towards success so she never has to work behind a bar, struggling to make ends meet again.