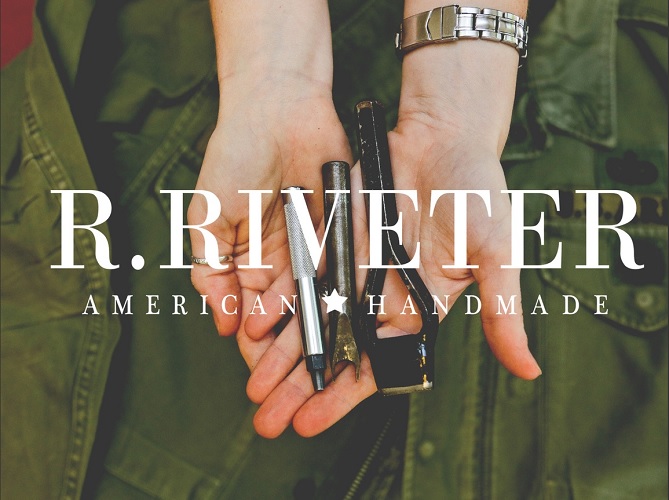 Army wife Cameron Cruse had barely any time to celebrate achieving her masters degree in architecture, from the Savannah College of Art and Design, before she had a face a common occurrence for military families, a location change. Households with a member in the services can look forward to relocation every 2.9 years on average, and rather than letting the interruption to her career plans dishearten her, the entrepreneurial Cameron joined up with fellow military spouse Lisa Bradley, and together they founded R. Riveter.

Rosie the Riveter, with her catchphrase of ‘We can do it!’, was a cultural icon of World War II. She represented the women who worked in formerly male-dominated occupations, mainly industrial and manufacturing ones, after the previous workforce had been decimated by male enlistment into the forces. The campaign to enlist women during the war had long lasting effects when peacetime returned, women had proved to themselves that they could work as well as men in any sector, and a good percentage of the female workforce continued working, long after such actions were required to assist the war effort. Due to this, Rosie also eventually became a symbol of feminism and equal rights in the workplace.

The unique manufacturing process devised by Cameron and Lisa involved utilizing the services of other service wives across the country, all of whom had difficulty building a steady career for themselves, as they too were frequently relocated at a moments notice. Those scattered workers, called ‘Riveters’, would produce the individual parts that made up the final product, high quality handmade bags and accessories. The products would be fully assembled at company HQ, and then sold online, as well as through a brick and mortar retail location.

The two entrepreneurs needed some capital to get things rolling and reached out to the crowd funding site Kickstarter, in September 2014, to fund their start-up. The well presented proposal, combined with the unique manufacturing process, was a big hit with the Kickstarter community and the campaign goal of $35,000 was soon passed. At the end of the month long campaign, the final pledges totalled over $42,000, and the pair launched the R. Riveter business soon afterwards.

The first R. Riveter store opened in Southern Pines in North Carolina, just outside of Fort Bragg. Things went well initially, but as always with a new business, more capital was required to achieve the sort of rapid growth that the pair believed was possible With the goal of a shark investor and partner in mind, they appeared on Shark Tank in February 2016.

When Lisa and Cameron appeared on the show, they announced to the sharks that they were hoping to get an investment of $100,000 in exchange for a 20% stake in their business.

Lisa explained the unique manufacturing process that empowered military wives, enabling them to earn a stable income no matter where they were living. She shared with the sharks her belief that the system could redefine the boundaries of American manufacturing. Cameron explained how only surplus military materials were used as raw materials to produce the R. Riveter Range, as they were inexpensive, durable and of high quality.

There were samples of products handed out to the sharks, and Robert Herjavec was handed a bag as Lisa told him that 15 military spouses had gone into making it. He asked her what that meant exactly and she explained some more about the remote working practices of the companies manufacturing workforce, The ‘Riveters’. She told him how each element of the finished bag had been manufactured in different parts of the country, and then shipped to the R. Riveter store at Southern Pines in North Carolina, where it would be assembled and then sent out to customers.

Kevin O’Leary asked if most of the sales had been through military families so far. Cameron admitted they had, however the target market were those who supported the military, and people who understood that sales for R. Riveter were helping the military spouses community. Kevin asked where the sales were being made. Lisa told him that 60% of business was online, with the remainder taking place at the Southern Pines store.

Robert Herjavec asked what level of sales had been achieved so far, Lisa confirmed that sales in the last twelve months had been $300,000. Robert was impressed, ‘That’s really good’ he remarked.

Lisa continued, telling the sharks that with investment they were projecting sales of $400,00 in the next year. Kevin queried that, asking why an investment from a shark would increase sales by 25%.

Lisa explained that she and Cameron had so far only invested a total of $9,000 into marketing their business, they were planning to spend any investment gained in the tank on building the brand visibility, and making R. Riveter bags available to a much wider customer base. Mark Cuban was visibly shocked that they had achieved so much with so little, so much so, that he burst into a solo round of applause in recognition of their success so far.

Mark was looking impressed and he was interested in the virtual side of the business, he asked if the pair had any plans to enhance the online experience for customers. Cameron confessed that nearly all the customer feedback they had received suggested that customers had heard about the company from press coverage, or through word of mouth. She saw that as a huge opportunity for the business, to tap into a vast online market that they were not yet competing in. She confirmed that they hoped to use part of an investment to ramp up their online marketing activities.

Kevin mentioned that the retail price of the bags was quite expensive, Cameron explained that customers would be proud to buy American Hand-made items, particularly as they were hand made by service wives. Any customer who understood that, and supported the community, would be more than happy to pay a little extra in the circumstances.

Daymond John spoke next. He told the pair that he didn’t think they needed any help. He explained that often entrepreneurs would give away a percentage of their company, believing that a partner knew much more about a business than they did. The fashion guru was of the opinion that sometimes the new partner had little to add, and the business owners had forfeited part of their profits for little extra value to the company. He believed he had little to add to R. Riveter and that the two would be unwise to give part of their company away, as they were so successful without outside help. With that glowing praise, and sincerely given piece of advice, Daymond was out.

Kevin O’Leary was almost casual as he mentioned the R. Riveter business tied in with at least two of his other concerns. He offered the pair the requested $100,000 in exchange for 20%. He was so uncharacteristically off-hand as he did so, that Lori had to clarify with him that he had actually made an offer. Was Mr Wonderful playing a slow hand with the military wives? He was typically hard to read and only commented ‘It’s an offer, I know what needs to be done’ somewhat cryptically, as he confirmed he was after a deal.

Robert Herjavec thought the business was great and the entrepreneurial army wives were fantastic. He matched Kevin’s offer exactly and left the pair with a difficult choice between the two competing sharks. They looked thoughtful, but only for a moment. Mark Cuban jumped in quickly before they could agree to either offer.

Mark would also agree to the pair’s original request, namely a $100,000 investment in exchange for 20% equity, but he also offered to fund the inventory of the business. As a final sweetener he also asserted that he would be prepared to fund the costs of any additional equipment, or assets, that the business required in the future.

Lori wasn’t going to compete with her fellow sharks, she explained that she concentrated on cheaper mass-market products and the R. Riveter business was exactly the opposite of that model. She took the opportunity to admire their success so far, and wished them the best of luck for the future, but Lori was out too.

Daymond John, once again, asserted that the R. Riveter entrepreneurs should tell his fellow sharks to ‘Take a walk’, for which Kevin thanked him sarcastically. Daymond continued, and asked the pair which offer, if any, they were going to accept.

There was one deal with added benefits compared to the others and it was no surprise when Cameron, after a very brief consultation with her business partner, confirmed ‘Mark, we have a deal’, and the new partners sealed the deal with a hug and a handshake.

As the successful duo left the tank, Daymond told Mark that they ‘Didn’t need our help’, but Mark was not going to let that pass. He told the FUBU boss that had the pair not received a deal, Daymond himself would have chased after them to offer one. Mark was perhaps exactly right with that observation, Daymond didn’t deny it, in fact he actually seemed to agree, with a brisk ‘So?’ in response.

The investment provided by Mark Cuban has allowed the R. Riveter business to expand its workforce, and the company facilities, since the segment first aired.

The business was able to employ the services of an additional 24 remote ‘Riveters’ to supply the increased demand that an appearance on Shark tank always brings about. The growing workforce now numbers 35, including the additional staff that have been taken on at the R. Riveter retail store in Southern Pines. Lisa and Cameron now have plans to open other retail locations by the end of 2016, and are also hoping to expand the number of online locations where their products are available.

There have been improvements to the company assets too since the show, A brand-new, custom built warehouse has now been opened and it leaves the business ready for the influx of business they are hoping to see.

It certainly seems that the R. Riveter segment on the show has had a positive effect on interest from potential customers. The website cautions that due to a huge influx of inquiries since the Shark Tank show, they are experiencing a slight backlog in answering all of them right away, and to please be patient.

I’m sure they will have no problems dealing with the sudden deluge of interest. After setting up a successful business, despite the inconvenience of regular relocations, and the pressures of a family life in service to your country, Lisa Bradley and Cameron Cruse are sure to find that just like Rosie the Riveter, they can do it.