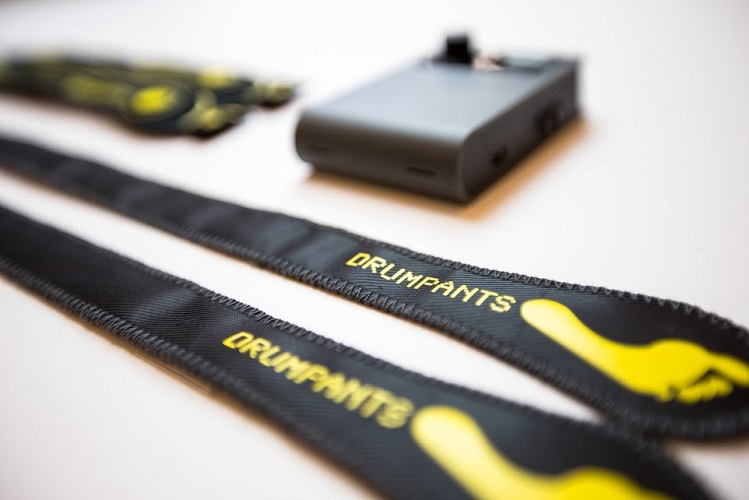 There’s a stereotype about drummers being big, burly men. It usually includes the image of them being heavy drinkers, as well as scruffy and unshaven, they’re often considered the wildest-living members of any band. But in these days of augmented reality and wearable technology there’s a new type of drummer emerging. No tattoos, no denim jacket and no visible drum kit at all.

Tyler Freeman had the original inspiration for the idea, he was a drummer with an interest in technology as well as design, and along with his partner, Lei Yu, a product manager and marketing executive, he conceived and designed DrumPants, a new and hi-tech product for drummers.

During a six year long development stage, the product needed refinement in durability and comfort and that required additional funding. To achieve those funds, Tyler and Lei went to the popular crowd funding site Kickstarter in December 2013. The pair sought $35,000 from the campaign and one month later when it finished, they had achieved pledges totalling almost $75,000 from over 500 backers.

You’d think that successfully getting an offer from one, or possibly, even more than one interested shark, would be the main aim of the entrepreneurs who appear on Shark Tank, but sometimes, that’s where their problems begin.

Lei and Tyler came to the Shark Tank in October 2014 where they hoped to attract a shark willing to part with $150,000 in exchange for 5% equity in their business, that added up to a valuation of the company at $3 million, something the sharks were bound to question.

The pitch started well, Tyler and a few members of his team began tapping themselves to provide a quick beat composed against the Shark Tank theme tune, as Lei danced, slightly ackwardly, just to show how funky it all was. DrumPants weren’t just pants, they were a ‘wearable controller platform’ Tyler explained. They could be worn anywhere and they also had other uses beyond music. They could be used to control apps, games and websites.

Lei elaborated further, DrumPants could change how people interacted with their devices and shape the future of wearable technology.

There were questions from the sharks about the details, Mark Cuban asked if the sensors worked via Bluetooth, Tyler confirmed they did, he also explained that DrumPants provided foot pedals that could be worn comfortably inside the shoes, and software that could provide 100’s of different samples and even loop beats easily.

Daymond John looked impressed and seemed to be considering the potential uses carefully, he asked what sales had been achieved by the company so far and Lei confessed that they were only taking pre-orders online at the moment.

‘So you’re pre-revenue’ stated Kevin, making sure that all the other sharks were clear about that.

Daymond asked what the retail price of the product was, Lei explained that the units sold for between $100, for the basic unit, and $230 for a fully Bluetooth compatible one.

Kevin couldn’t see any proprietary value in the product at all, Tyler explained that they had several provisional patents they were working on. When Mark asked what was patentable about DrumPants, Tyler explained that they were looking to patent ‘Rhythmic gestures controlling devices’. It sounded like a doubtful basis for a patent and Mark particularly seemed less than impressed, raising his eyebrows in surprise, but he only did it once, perhaps to make sure he wasn’t in breach of the proposed patent.

Robert Herjavec expressed doubts about the size of the potential market for the product, particularly at the price, Tyler explained that he envisaged popular performers within the electronic dance music scene using DrumPants at large venues and concerts.

Kevin O’Leary couldn’t let all this talk of concerts and dance music take the discussions away from the numbers any longer. He pushed Lei for sales figures.

Lei, who seemed to deal with all the numbers while Tyler concentrated on the drumming, confirmed that 720 units had been pre-sold online so far and asserted that a further 4,000 units were projected to be sold ‘based on holiday sales’. With a net profit margin of 45%, Lei expected the business to achieve profits of over $200,000 in that year alone.

Lori explained how she always looked at a product and asked herself if she could sell millions of units, if it had a broad enough market. She liked the idea, and thought the product was great, but it was just too niche a market for her and she was out.

Tyler wasn’t going to give up on Lori just yet, ‘Just imagine if you’re watching QVC, see a product you like, and just tap your pants to buy it.’ he said. But his glorious vision of an effortless consumer experience was soon shot down by Mark Cuban.

‘That is the dumbest thing I’ve ever heard’ Mark asserted. Lei explained that Tyler was describing the next generation of their products, she hastily added that the pair were only selling the DrumPants business in the Tank.

Kevin O’Leary had concerns about the size of the market, was it too niche or not? He couldn’t tell. For a $3 million valuation he needed to be sure about the profits and in this case he wasn’t. Kevin was out too.

Robert Herjavec wasn’t too keen on the DrumPants, but he was interested in the next generation of products. He found the field exciting and felt it had great potential. To Kevin’s clear surprise he had an offer for Tyler and Lei. He would invest the requested $150,000, but in exchange for 20% equity in the business.

Daymond John asked if the entrepreneurs would be interested in licensing DrumPants. Tyler confirmed they would ‘absolutely’. At that, the FUBU guru had a proposal too. He would offer them $250,000 in exchange for 20% equity in the business.

Robert gave Daymond a sideways look, not looking overjoyed at having his own offer improved upon, he told the pair that a licensing deal would only profit them if the product actually sold.

Daymond wasn’t going to let that pass, he emphasized that licensing deals were based on ‘Guaranteed minimums’ and described a likely scenario where a guaranteed amount of sales would be confirmed by the licensing partner.

Robert spoke up again, he saw DrumPants as a profitable proof of concept, looking forward, he envisaged a multitude of uses and applications for the technology in the future.

Tyler and Lei looked uncertain which deal they would be best agreeing too and asked for time to confer outside the tank.

Kevin O’Leary wasn’t involved any longer but he was always happy to add to the tension in the tank. ‘You know what happens when you leave the Shark Tank. Nasty, nasty things!’ he said to the worried looking duo. ‘Nasty Things’ he echoed as they left to talk.

In the lobby, Tyler seemed swayed by the financial inducement of Daymond’s offer, but Lei was not of the same opinion. She didn’t think Daymond understood their technology and also felt licensing wasn’t the right way for the business. The two seemed in deadlock until eventually Robert shouted from the Tank ‘Lei, I’m getting old here.’ and they were forced to return, still unable to reach an agreement amongst themselves.

When they returned, Kevin summarized both offers for them and asked if they had made a decision, It was clear the entrepreneurs were a long way from deciding anything just yet. Tyler asked Robert Herjavec if he would be prepared to reduce the equity required in his offer to 15%, for the same investment of $150,000.

After some more tension-inducing stirring from Kevin, Daymond asked if the pair were still interested in his offer. Both Tyler and Lei awkwardly tried to dodge the subject of their dislike for the licensing strategy but their lack of enthusiasm for it was clear to see.

Daymond stated how he admired decisiveness in people who appeared on the show, having already seen that they were not enthused by his approach and offer, he retracted it and dropped out. ‘So now it’s on you Robert’ he finished, looking to the only remaining shark with an offer on the table.

Robert confirmed that he wasn’t going to amend his offer from 20% equity. Tyler looked disappointed and asked Mark Cuban if he had anything to add.

Mark had still not dropped out of the negotiations, although he hadn’t seemed that impressed with DrumPants throughout the pitch either. He explained that his objection with the business mainly centered around the personalities of Tyler and Lei. He liked the product but felt it needed a forceful person driving it to achieve success. He was very diplomatic about it but he essentially told Tyler and Lei that they were too indecisive for him to go into business with, he was out too.

Things were rapidly going off-beat for the pair and the final dud note was about to close their performance in the tank. Robert wasn’t impressed that Tyler had asked for alternative offers from first Daymond, and then Mark Cuban. The pair were unable to make a decision and he was out too.

Having dropped from two offers to none, Lei suddenly put up the most passionate defense of the business she had throughout the pitch, speaking fervently about the potential of the business, but it was way too late. Kevin O’Leary virtually threw them out of the tank in the end.

DrumPants Now in 2018 – The After Shark Tank Update

Tyler Freeman and Lei Yu faced a difficult decision in the Shark Tank, although in retrospect, the long-term investment of Robert Herjavec in their concept was a far better offer than the potentially short-term benefits of a licensing deal with Daymond. Ultimately, it was their lack of agreement and decision making that cost them a deal on the show.

That hasn’t stopped DrumPants from finally making it to the market and becoming available to drummers and wearable technology fans alike. With the increase in demand the product showed after the show, along with Lei’s business expertise and guidance, DrumPants achieved profitability in its first year of sales.

Although the Sharks turned on the laid-back style of the DrumPants pair, their product has made quite an impact on the music scene. They have testimonials from musicians about the functionality and quality of their products, but not from anyone really famous… yet.

The music press has been very complementary about DrumPants but the product line has now been extended to a App called ‘Tappur’ that, although only in Beta development so far, promises to revolutionize the way you use your Smartphone.

With such an innovative business that is at the forefront of technology and design it’s perhaps worth a moment to wonder if Robert Herjavec ever regrets not being more flexible with DrumPants and securing a deal on the show. It’s likely that Tyler and Lei would have jumped at his offer if they had had the time to consider all the benefits, but for now, they’re marching forward to a different beat.