Hungry Shark World is the newest installment in the Hungry Shark mobile game series. If you are new to this game then it puts you in the fins of a ridiculously-hungry shark as you eat everything and everyone until you grow in size and unlock larger and more ferocious carnivores.

The act of consuming all that stands in your way might sound simple enough but that’s not the case here. You’ll encounter enemies ranging from fellow marine animals to human beings armed with guns or aboard massive submarines. It will take more than just your maw to defeat the opposition.

If you are on the prowl for tips and tricks on Hungry Shark World then read on: 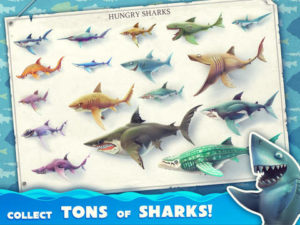 The game features a roster of incredibly hungry sharks ranging from the small Blacktip Reef to the monstrous Megalodon. To unlock the next shark you must fill up the progress bar indicated below the screen by acquiring more points. If you have the money then you can always buy gems in the store and use them to instantly unlock a shark of your choosing.

Here are some tips on how to make the most out of each size group:

The first shark you will use and the only one that belongs in the XS size group. It is recommended to avoid purchasing upgrades for this shark and instead just use it to finish missions and accumulate funds so you can unlock the next shark. Think of it as the introductory character that you will use to test the waters and get a feel of the game especially if you haven’t tried Hungry Shark Evolution.

These S size sharks have a Gold Rush multiplier of x3 so just focus on earning more coins and completing missions. They can also break bone barriers so you can explore more of the location. Avoid spending on upgrades and just save up your dough for the next size group. But if you are having some problems with these sharks then you can spend a little bit of coin to bolster its stats. The boost stat is immensely useful as it provides extra propulsion and more damage whenever you press it.

The boys are getting significantly larger. They have a x4 Gold Rush multiplier, can destroy rocks, and have better stats compared to the first two groups. Still try to avoid spending a single coin on upgrades as much as possible and just farm for the next bigger groups. If you want to you can buy accessories and pets to help you out. Also do not unlock the other two locations and just stick to the Pacific Islands so you will not have missions that involve killing sharks that are larger than you.

With a x5 Gold Rush multiplier it is a lot easier to farm for coins with these beasts. They can go through metal barriers too. You can spend a little bit of money to upgrade their stats if you are having difficulties in surviving fights and eating prey. Buy more pets as this size group can be accompanied by two little critters.

These behemoths can destroy black rocks and can be equipped with two pets. It would be great to upgrade their stats with some of your coins. Their x6 Gold Rush multiplier will make it easy to earn back the money you spent on enhancing these sharks. Go ahead and buy the Arctic Oceans location so you can have a new place to terrorize and your bigger sharks can go head to head with foes of the same size.

The second to the last group of sharks. Go crazy and spend your coins to beef up these monsters that have a whopping x7 Gold Rush multiplier as you will be spending a lot of time with them trying to rack up enough points for the next size group. They’re large enough to eat shoals of fish with relative ease and strong enough to beat other sharks and break all kinds of obstacles. You can equip three pets on these sharks so make sure you have enough little companions to benefit from multiple abilities.

Once you max out the progress bar of the previous size group you can unlock the massive Megalodon for 400,000 coins. The Megalodon has incredible stats once it is fully upgraded and can consume anything in its path with hardly any effort at all. 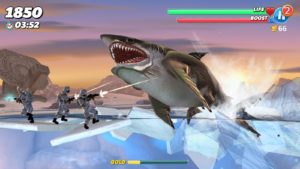 When munching on groups of fish always eat them all up and leave no survivors. You’ll get bonuses for consuming entire shoals. Certain missions also require you to do this. Don’t hesitate to go on an eating spree to further boost your score multiplier, and of course to avoid losing life.

It would be best to seek out and accomplish your missions instead of just randomly swimming around and eating prey. This will give you better bonuses and you might stumble upon HUNGRY letters and other goodies. If you have a mission that you can’t finish then just wait until you get a more powerful shark. Don’t waste gems in skipping missions.

Be aware of your surroundings and your health. When a shark becomes starved it can be quickly killed by an enemy attack or an environmental hazard. When you are in that state try your best to swim away from potential danger and immediately find something to snack on.

Just rely on visual cues to determine if you can take down a target or not. Size matters in this game so don’t you dare approach a creature that is five times larger than your shark. Also keep an eye out for security guards on the shore as they can shoot you dead especially when you are using the weaker sharks. The underwater divers may look harmless but they are actually equipped with knives so keep that in mind if you’re thinking of eating one when you’re starving.

Don’t forget that you are not only limited underwater. Make good use of that boost to spread terror on the humans who think they are safe on the ground.

Need Help with Coins and Gems? 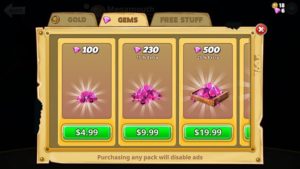 You can earn free coins and gems in the Free Stuff area of the store. If you don’t know where that is, just tap the top right part of your screen that shows your current coin and gem reserves. The Free Stuff rewards currency when you watch one of the trailers posted there.

If you’re just starting with this game try to prioritize buying a map as your first purchase. This immensely helpful item will lead you to chests and other goodies on the location. No more will you have to swim blindly hoping to find something important. The map will also help you find the HUNGRY letters for more points and coins. The more letters you find the better your rewards will be.

Abuse the Gold Rush when it triggers. If you don’t know what it is then it is a state that your shark enters when you fill the bar at the bottom of your screen. Everything is covered in gold and you have infinite boost and health. Eat everything and everyone the same size as you during this limited period to earn more coins. Every time you trigger a Gold Rush you will fill the purple colored bar below it. That one is the Mega Gold Rush and it bestows the same benefits of Gold Rush but with an added bonus of being able to eat prey that are larger than you. No need to fear those massive whales or even the naval mines when you are in this state.

Do your best to chase the gem fish. If you are new to this game they are the little swimmers that emit a purple haze. Eating them will give you a good amount of points and a few gems. When you have a larger shark you can destroy man-made structures and vessels for gem rewards.

During the early phases of the game always find the daily reward chest for coins and gems. In the later stages when you have bigger and badder sharks these chests become insignificant as you can earn more than what they give.

As always with these kinds of games where there are premium currency, do not trust online sources or apps that claim to be “hacks” that give you unlimited gems or coins. These will only get you in trouble and may do your device more harm than good.

I hope these tips and tricks will help you on your quest to become the most feared shark that dwells in the waters. Just remember to be very ravenous so you can earn the most number of coins and gems in one play session.