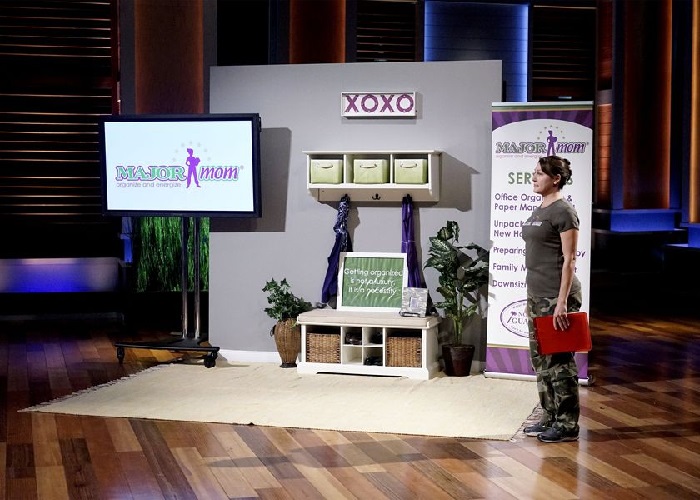 Major Mom founder Angela Cody-Rouget didn’t select her company name to impress customers, it really did describe the lady behind the business very well. After a successful sixteen year long career in the Air Force, that culminated in her reaching the impressive rank of Major, she could effortlessly juggle the organization and logistical requirements of her important role in the services. She was even entrusted with the Nations nuclear launch systems at one time.

After the birth of her second child, Angela found that she was increasingly torn between the two great loves in her life, the military and her family. After much soul searching, Angela finally decided to resign her commission with an honorable discharge in 2006, and looked forward to focusing on being a full time mom. She soon came to understand how busy and demanding a stay at home moms life can be. But there was a major upheaval around the corner for Angela and her family, soon after leaving the Air Force her husbands real estate business unexpectedly collapsed, and the family suddenly found themselves in an uncomfortable financial position.

Angela was left with no real choice but to return to work, and after one particularly hectic round of cleaning and tidying, she had a flash of inspiration. Angela realized that she could use the superior organizational skills, that she had gained from her time in the Air Force, to help other busy people de-clutter their lives.

Angela launched the Major Mom business and worked alone as a professional organizer for the next three years, but she had a grander vision for the business. In 2009 she brought a partner into the company and opened the Major Mom training academy to train other organizers, referred to as liberators – because they liberate customers from clutter and disorganization.

It wasn’t long before Angela had four locations, in Arizona and Colorado, offering the Major Mom service to busy customers and their cluttered homes and businesses, but the entrepreneurial Angela had major expansion plans for the business. She wanted to launch a franchise program to expand the business into a well known national brand, one that would help her achieve her ultimate goal, to organize America.

Franchise schemes don’t come cheap, and in order to take those first steps on the road to cleaning up across the country, Angela needed an injection of cash and the assistance of a business expert. It wasn’t long before a suitable solution presented itself. Angela was approached by Shark Tank producers interested in seeing her appear on the special Armed Forces episode to be aired in February 2016.

When Major Mom marched into the tank, dressed in camouflage gear, the sharks seemed to unconsciously stand to attention, or at least sit up a bit straighter, Angela was the sort of person that demanded attention, even from the sharks.

Angela introduced herself to the sharks with a salute and announced she was seeking $150,000 for a 20% stake in the Major Mom business. She launched into an enthusiastic and positive pitch detailing the work of her and her team of liberators. She showed the sharks some before and after pictures, to illustrate the transformation from chaos to order that her business could provide. She explained about her franchise plans and finished by saying that if the president could trust her with the keys to the nukes, the sharks could trust her with their money.

Even the Worldly-wise sharks didn’t run into someone with such an impressive resume every day and Lori inquired about Angela’s role in the Air Force. Angela showed the sharks a picture taken during her service days, in which she was in a bunker under Vandenberg Air Force Base in California, with her hand actually on the key to the nuclear arsenal of the free World.

The sharks were impressed, lets be honest, who wouldn’t be? Mark Cuban asked if Angela had ever come close to an actual launch situation. Angela told him she could tell him, but then she would have to kill him. Mark was suddenly no longer curious but Robert Herjavec laughed and commented ‘Go ahead, kill him’. Fortunately for Mark, Angela wasn’t deeming him a threat to national security just yet and she didn’t take Robert’s advice.

The sharks quizzed Angela about her franchise plans. Angela revealed that any new franchise owner would need $20,000 for the franchise licence and the company expected them to provide an additional $5,000 for marketing.

Kevin O’Leary thought $25,000 was expensive for new business owners, he inquired what profits a new Major Mom operation could expect to achieve in the first year. Angela admitted that $30,000 would be a good result.

Kevin wasn’t too impressed, he hypothesized that a new Major Mom franchisee would spend $25,000 to set up, and receive only $30,000, if the business went well. He couldn’t see that such returns would be impressive to investors. He asked Angela how she would repay any investment a shark made in the company.

Angela knew her numbers, she explained that in order for a shark to see their investment returned, the business would need to open 150 franchises, and she would need to ensure that 90% of them were ‘wildly’ successful.

Mark and Kevin both pointed out how hard that particular goal would be to achieve.

Lori asked why Angela wouldn’t want to grow the business steadily as she had been doing. Angela, somewhat surprisingly answered that ‘It just wasn’t fun’, and the sharks seemed puzzled by her answer.

Robert Herjavec also believed that the $25,000 price tag for new franchise owners was too expensive to attract much interest. He thought the business model was sound, but the Major Mom business was not quite ready for a franchise scheme at the current time. Offering Angela his best wishes for the future, Robert dropped out.

Kevin was impressed with Angela’s drive and determination, he described her as a ‘Tornado’ of activity, but he could see a problem with the franchise system too. He believed that in order for the franchises to be successful, they would have to be run by people with the same organizational capabilities and motivation that Angela herself possessed, and he didn’t believe that such high calibre candidates would be easy to find. Because of that, Kevin was out too.

Daymond could see challenges for the future of the business. He believed the franchise cost was too high and thought that scaling the Major Mom service up to a nationwide level would be extremely difficult to achieve. He assured Angela that he would love to become a customer, but he wasn’t interested in becoming a partner too.

Mark Cuban was very diplomatic with Angela, perhaps because of her earlier threat, perhaps because she was a wonderfully organized applicant, but his decision wasn’t quite as positive. He thought the business was ‘Noble’ and had achieved a lot, but Angela’s comment about fun had concerned him. He suggested that most of business was ‘a grind’ and an entrepreneur always looking for action and adventure would be an unsuitable partner for him, Mark dropped out too and left Lori Greiner as the only shark still involved.

Lori believed that a franchise strategy would ultimately leave Angela too ‘spread out’ and believed that the business would be more profitable, if it concentrated on becoming the only service of its kind in a smaller region. She admired Angela’s achievements so far and told her she was a credit to women everywhere, but Lori was out too.

Angela had been a professional and positive applicant throughout her segment, and she was gracious to the sharks that had unanimously rejected her business. As she left she told them ‘You’re all five star generals to me’ and popped another quick salute to the business moguls.

Major Mom Now in 2018 – The After Shark Tank Update

Angela, unsurprisingly, hasn’t let the sharks lack of enthusiasm for her franchise program deter her from her dream. She has said that she will continue persevering until she becomes a national brand.

She has a few points to make about the common misconceptions that professional organizers face. They are not just people who help out others, those who are unwilling or unable to organize things themselves. Organizers are sometimes deployed as an objective and experienced viewpoint that can help customers overcome the hurdles in their lives that they just cannot seem to jump.

Organizers do not just bring order out of chaos in the short term either, they are trained to help set up systems, and long term improvements, that will help maintain an orderly environment in the future too. Those same systems can be deployed before they are needed, such as at the launch of a new business, to ensure that processes remain efficient and streamlined, even as business activity increases.

Although Major Mom will benefit from the publicity that an appearance on Shark Tank always generates, it seems that the Major Mom franchise scheme is yet to show any new activity, the business is still only operating in four locations. On an online application form for interested parties, potential franchisees are advised that they will need between $20,000 and $50,000 start up capital in order to launch their own Major Mom outlet. As Angela learned in the Shark Tank, the high cost of setting a franchise up may well be what is stopping others from joining her crusade against clutter. Only time will tell if she does manage to lower the set up costs in the future.

Never one to pass an opportunity for development by, Angela spoke recently about some of the other things the Shark Tank appearance had taught her. She explained that she learned a difference in business philosophy isn’t an automatic failure, she believes that many former applicants made their appearance on the show without knowing their businesses numbers, and some do not even watch the show in preparation before appearing. She feels that the experience has strengthened her core belief, namely that being organized increases the time available to her, and her customers.

Despite her lack of success on the show, Angela’s determination and commitment to building her business into a nationally franchised one will likely see it grow steadily, although whether Major Mom eventually ends up organizing the whole country from coast to coast cannot be determined as yet.

Whatever happens to Angela and the Major Mom Liberators that work with her, I raise a glass to her service for her country, her determination, and above all her superb organizational skills. To be strictly honest, I will be raising that glass to her later, as soon as I can find one amongst all this clutter.