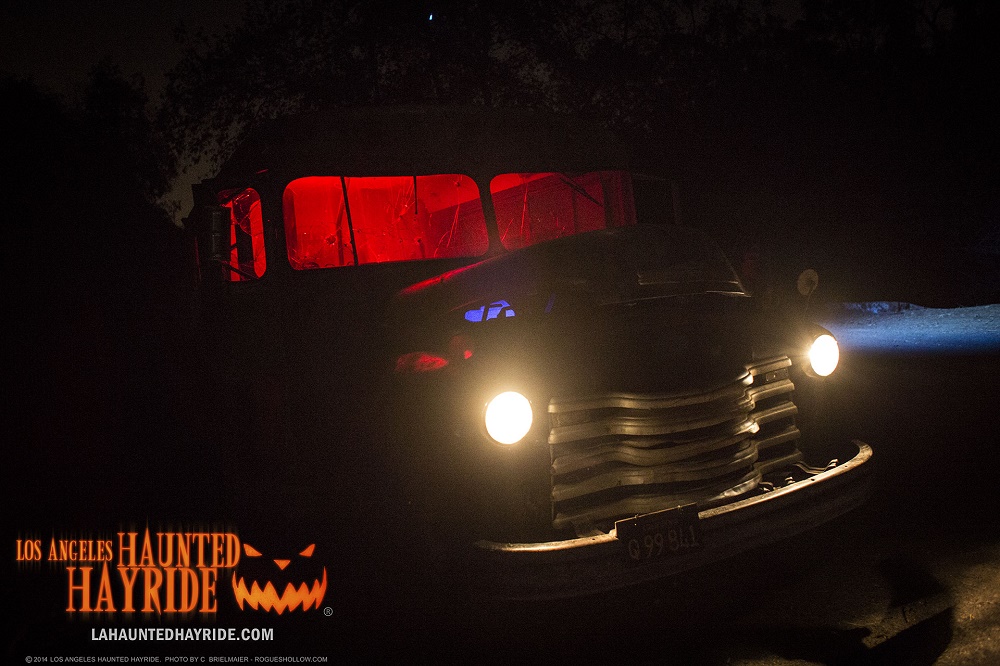 Melissa Carbone, a former Clear Channel Communications executive, is the owner of Ten Thirty One Productions. Since 2009, Ten Thirty One has been a major Halloween-themed live entertainment company in the Los Angeles area. Carbone went into business with the goal of staging the best haunted hay rides possible. Almost immediately, she made a local name for herself. For seventeen nights per year each fall, Ten Thirty One led Haunted Hay Rides for thirty dollars per ticket. For a premium, visitors could also rent a private wagon for up to thirty guests, enter a maze attraction, and feel true dread at a “Purgatory Side Show area.” Next, Carbone wanted to expand. She had a solid business model that she could see taking root in New York. Eventually, she hoped for Ten Thirty One to be the world’s largest Halloween-based entertainment company. This would, of course, depend on the sharks.

Some entrepreneurs like to make a grand entrance. Shark Tank fans may remember Rick Hopper, the owner of ReadeREST, nearly breaking a leg as he stumbled into the tank in season three. Unlike that example of what Kevin O’Leary called “bad theatre,” Carbone was prepared to impress. Following her into the tank was a shivering ghoul woman, straight out of a mental asylum in a survival-horror video game. Evidently, this was a strategy to soften the blow of Ten Thirty One’s valuation. She offered the sharks ten percent of her company in exchange for a two million dollar investment. This meant a twenty million dollar valuation and, potentially, the greatest deal from Shark Tank to date.

They wouldn’t have a chance to respond yet, of course. As Carbone described the company’s ownership and production of live attractions in the horror space, a stationary scarecrow from the presentation came to life. “Just when you think the terror is over…think again,” she uttered. An evil shaman and an executioner with a chainsaw stormed in from the wings. As the monsters converged upon the sharks, only Kevin O’Leary was unphased, chuckling at Robert and Daymond, who were clearly shaken. Mark threatened the attackers, warning the actor with the chainsaw that he would kick his “tush back to Texas.”

Apparently, it was enough fun for Kevin. “What’s really scaring the crap out of me is your valuation.” Why was a simple “scary hay ride” business worth twenty million dollars? For starters, Carbone said, they were pulling one million eight hundred thousand dollars in revenue every October. Ten Thirty One had also expanded beyond seasonal attractions. The Great Horror Campout was their next immersive event, where two thousand campers would be subject to twelve hours of over-night frights, as well as a bone-chilling scavenger hunt. “So it’s basically summer camp from hell,” Kevin commented. The Los Angeles Haunted Hay Ride was netting six hundred thousand per seventeen day season, and with a doubled capacity for the current season, Carbone was expecting over a million dollars in profit from that attraction alone.

She next stated her plan of expanding the Haunted Hay Ride into New York, a similar market. Its dense population and high concentration of acting talent made it the perfect choice for expansion. The Great Horror Campout would be planted in ten cities along the west coast. Mark was concerned about production costs. Was Los Angeles a fluke? Could that success be duplicated in other markets with so much overhead? On the contrary, the Great Horror Campout events had relatively low production costs and thus higher margins. To expand to new markets, Ten Thirty One would have to be savvy with advertising and promotion, a fact Carbone was ready for. As a high ranking employee with Clear Channel, she had that experience in spades, and her business partner was still with the company.

Mark Cuban wanted a better handle of the company’s revenues. The Haunted Hay Ride had fifty thousand unique visitors per season, with projections of just over hundred thousand visitors in the current season. These numbers were impressive but not impressive enough for Kevin. He calculated the after-tax profit of the Haunted Hay Ride at about seven hundred thousand dollars per season. Even with a multiple of ten, the business was worth a third of what she was asking. She argued that several Hollywood companies had offered to buy the business for a similar price. Also, she was confident in entering the similar New York market. This didn’t convince Kevin. He thought her risk analysis was off and that a few “Hollywood bozos” weren’t good indicators for an investor. Claiming he couldn’t get there, he backed out.

It’s worth bringing up some manipulation from Kevin here. Once businesses are profitable, it’s rare for Shark Tank investors to heavily base valuation on anything but annual gross income. The fact that Kevin zeroed in on the one million dollar profit figure (after earlier admitting this margin was high) is telling. Carbone waited for him to drop out after his criticisms, but he simply sat back and stared straight ahead, wanting her to crack and reduce the value. Going a step further and talking about after-tax numbers makes the situation even more misleading. Beyond this, she was asking the sharks to invest in Ten Thirty One Productions as an entire business, not just the Los Angeles Haunted Hay Ride. Kevin was significantly underestimating the company’s value as a negotiation tactic.

That doesn’t mean that the other sharks were completely confident on the valuation. Robert agreed that everything would have to go right for Carbone’s next-year projections to come true. Without pushing her to offer more equity, he dropped out due to the risk. Lori brought up the time to recoup her investment, a point no one had raised yet. Equity investors tend to make real money when their businesses are bought by a larger corporate entity. Carbone did have offers from some large players in the live entertainment space, but it’s possible that Lori doubted these claims. For this reason, she dropped out.

Daymond showed the first genuine interest in Ten Thirty One. Opening with a joke, he claimed wearing a piece of jewelry in the neighborhood where he grew up was a cheaper way to produce high octane scares. Daymond is often the greatest shark in the room, taking advantage of entrepreneurs’ desperation by making “greedy offers.” Even he showed hesitation in speaking up here. “I would have to insult you with my offer.” At Carbone’s urging, he offered two million dollars for forty percent of the business, a quarter of the initial valuation. She hesitated and looked pleadingly to Daymond’s right. “C’mon, Mark,” she begged. “Is that a yes or a no to him?” Cuban wondered.

Sounding defeated, Carbone countered Daymond’s offer at two million dollars for twenty percent of the business. Not giving Daymond a chance to consider, Cuban accepted the deal aimed at the other shark. “Really?” Carbone was in shock. He closed his notebook and confirmed with a grin. Carbone, as if there was any doubt, accepted, and the two shook on it. Cuban’s attempt to stab Daymond in the back had succeeded. Mark excitedly claimed that experiential entertainment, where consumers leave their living rooms in seek of a thrill, was the next big thing. Kevin claimed he would have to rise from the dead himself and look like Carbone’s zombie before he would ever make her deal. Stealing the final word, like he stole Daymond’s deal, Mark said that Kevin already did look like a zombie.

Even at two million dollars for twenty percent, this was the largest deal in Shark Tank history. In truth, Ten Thirty One had a lot to criticize. It was primarily seasonal, so income would be inconsistent. It hadn’t been market tested outside of Los Angeles, where Carbone had all of her connections. Beyond this, how big could the horror-based entertainment industry get? Where was the ceiling? Nevertheless, Carbone’s business savvy, combined with Mark’s forward-looking investment strategy, landed the deal. Carbone couldn’t be more excited to have investment capital to work with and Mark by her side.

After Shark Tank – Ten Thirty One Productions Now in 2018

Ten Thirty One’s update conveniently aired almost exactly a year after the initial segment, both just before Halloween. The timing was perfect, with the “Shark Tank Effect” bringing the Haunted Hay Ride and the company’s other ventures plenty of press during its most profitable season. The update finds Carbone interviewing actors for her growing cast on both the east and west coasts. The actors writhe and crawl, hiss and shriek. Between zombies, vampires, clowns, and other spooky characters, Ten Thirty One does not disappoint. Sales didn’t disappoint either. Since Carbone’s partnership with Mark, the business made two million dollars in revenue, with projections of growth to between three and four million in the next year.

Since the previous year, the company has undergone a transformation. Before, it was known almost exclusively for the Haunted Hay Ride, and the Great Horror Campout was only in its infancy. Now, the Great Horror Campout is on tour across the nation. The overnight attraction forces patrons to face demons and chupacabras. When it comes to the scavenger hunt, the queasy should beware. Competitors may have to rummage through cadavers for clues and items to complete the challenge.

Since the deal, Mark has brought his connections to the table. Most importantly, he connected Carbone with the CEO of Live Nation, the world’s largest live entertainment company, specializing in concert promotions. Ten Thirty One impressed him so much that he decided to join Mark as an investor. Between Los Angeles and New York, the company now boasts nearly one thousand employees between the cast and crew. Carbone is thankful to have Mark as a partner and for the resources he has been able to provide. With his help, she’s excited to make Ten Thirty One Productions into the company she has always envisioned.