Smoking sucks. It’s unhealthy, it destroys your lungs, and it can easily destroy your life. Fortunately, thanks to the evolution of technology, smokers now have a much healthier alternative to turn to; vaporizing. Vaporizing is mostly confirmed as healthy, although nothing can be confirmed due to the risk of a liability, but when you begin to start vaping instead of smoking cigarettes, you’ll feel and notice the difference right away. No longer will you wake up and hack out a lung while reaching for that first cigarette!

Vaping can be a bit of a daunting task to get into and understand. There’s a fairly big culture behind vaping, however, so finding out some information (or even a friend who can teach you) shouldn’t be too hard. Most vape shops, whether they’re online or a physical brick-and-mortar store, will offer a variety of electronic cigarettes and are vast sources of knowledge which can help find the perfect electronic cigarette, juice, and anything else you might need, customized just for you.

Within this guide, I’m hoping to introduce you to some of the brands that I initially looked into (and used) when I was looking to quit smoking about 2 or 3 years ago. Today, I don’t really smoke any cigarettes at all (I’ll ask to bum one, smoke half of it then gag and toss it away) and I feel great – breathing is easy, and my lungs don’t feel so tar-ridden. Making the switch to electronic cigarettes over traditional “analog” toxin-ridden cigarettes early enough in your smoking career can be vital to help you quit smoking.

Blu was the first brand of electronic cigarette I looked into, and possibly one of the most newbie-friendly. However, Blu also does have noticeable drawbacks, such as an expensive price and the fact that you’ll have to constantly be purchasing new batteries and flavor cartridges.

Blu E-cigs are cigalikes, and are marketed as a friendly tool to help newbies understand how personal vaporizers works. However, Blus are also about the same weight as traditional cigarettes, and since they’re cigalikes, they have the exact same dimensions as real cigarettes – although they won’t feel like paper, this was instrumental in helping me get back to my daily grind. If you’re like me and smoked a lot, then you will know that your fingers can sometimes get that “itch” if you’re doing something without holding a cigarette. Blus help to relieve that at the start, and their strongest quality is that they look just like cigarettes.

Blus come in two different forms; they are either disposable and last for around 500 puffs, or they are reuseable. The disposable electronic cigarettes from Blu can be picked up for around $8 from most pagodas or gas stations, and they offer a nice insight to how your own personal Blu would work and feel – not too much vapor, not too much liquid, but the menthol chill and the nicotine buzz is really nice. Disposables come in the flavor of menthol, or traditional, and only come with an 18 milligram-per-milliliter measurement of nicotine.

Reuseable Blus are a much nicer investment, since you won’t just toss it when you are done with it. A typical Blu kit comes with a battery pack/container, meant to store 1 battery, 3 cartridges, and 1 fully complete Blu e cig, a pack of 5 flavor cartridges to get you started, documentation, and comes complete with 2 batteries. Overall, the investment should cost you around $40 and can be picked up from a smaller selection of pagodas or gas stations. The reusable kits are extremely simple to use – the battery, which is the “end” of the device, is meant to be recharged and kept for as long as possible. The battery comes equipped with a blue light on the end of it (my favorite trademark of Blu is the black look against the blue lighting) that will communicate information to its user through a series of pulsing, including when you are out of juice and need a fresh cartridge. The cartridge is the part that actually goes into your mouth, and is where most of the work actually happens – it the cartridge that contains both the juice and the atomizer which will generate the vapor.

One big thing that kept me on Blus was the fact that they have a customer loyalty program – I ended up getting a lot of free cartridges over the two years or so I used my Blu.

Blu cartridges come in a variety of flavors, starting with the simple menthol and tobacco, and going all the way up to french vanilla, cherry, and pina colada. The main drawback with Blus is the fact that refilling the cartridges can be a hassle, and sometimes the atomizers in the cartridges will burn quickly and leave you with a gross taste. Blus may not be all that reliable in taste, as a matter-of-fact; when I was near the end of my Blu career, I threw away all my batteries due to overuse, as they felt like they were burning the juice and causing it to taste nasty. However, Blus were instrumental in getting me to drop cigarettes and start vaping instead.

The Juul, by PAX Labs, is a newer product to the market, and sadly was not as instrumental in helping me quit vaporizing since I only bought mine recently; however, I love my Juul. The Juul is an extremely tiny form-factor electronic cigarette, and I sometimes freak out because I lose mine. However, the Juul is a tiny device which delivers some serious vapor. The Juul is sort of like a cig-alike, but since it is square and not rounded, it doesn’t feel the same. Juul offers just as legitimate as a vape as a self-assembled device, though; it packs a ton of flavor and vapor into a discrete little device.

If you’re familiar with the PAX herbal vaporizer, you may already have a clue on how the Juul works – the Juul comes with a magnetic USB charging cradle where you simply plop the Juul in, and let it charge. The Juul, like the Blu, comes with proprietary ‘Juul Pods’ which are clicked in and out of the Juul’s body. Just like the Blu cartridges, the actual Pods are what contain the juice and the atomizer. However, I have not gotten the nasty flavoring out of my Juul that I originally had from the Blu, which is why I continue to use my Juul.
Unfortunately, it seems like the Juul is a little more rare than its Blu counterpart; I know of two gas stations nearby that sell both the Juul starter kit and individual Juul pods of juice, and fortunately one of them is right next to my house. Should you want to purchase a Juul, you can easily do so online from the Juul Vapor website; a starter kit will cost you $50, but comes with free shipping! You get the Juul battery, 4 pods of juice (a variety so you can sample them all) and the USB charger. More pods containing juice can either be purchased in stores or directly from the Juul website, and a subscription feature is even available if you don’t want to keep ordering juice. 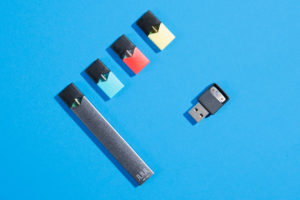 The biggest mark against Juul is the fact that they only have four flavors available, and refilling the pods isn’t the easiest task. The four flavors created by PAX Labs specifically for the Juul include cool mint, fruit medley, creme brulee, and classic virginia tobacco. The four flavors that the Juul does have, however, have been perfected and should help you quit smoking in no time. Cigarettes just have a fraction of the flavor that the Juul has.

Rounding off the list is KangerTech, who doesn’t quite make electronic cigarettes which are as easy to use as the other two brands, but are ultimately the biggest step in helping you to quit smoking. KangerTech makes a variety of electronic cigarette products, all of which are intended to be parts of a customized personal vaporizer build; they aren’t meant to be limited to just one type of device.

KangerTech does produce some of the best electronic cigarette devices, and have been in the game for just as long as anyone else – only Innokin and KangerTech have been in the game since 2007. KangerTech carries a variety of devices, starting with the simple stick-style eGo that only contains a small amount of juice and puts off a wimpy amount of vapor, building up all the way to their powerful sub-ohm devices. KangerTech is a little bit more overwhelming than the other two brands since you’ll have to really be worth your salt in order to get a pleasant vape, but if you can understand KangerTech devices, the vaping world is your oyster.

KangerTech carries a variety of starter kits, which are important to the first-time vaper. I purchased the EVOD starter kit, which came with the typical two batteries, two tanks, a charger and a case, but I also got some juice since I purchased my kit in a store. This is the wonderful thing with KangerTech – their products are so good, so as long as you’re getting it from a legitimate store which didn’t get scammed into buying a clone, you can purchase it from anywhere. Most stores that carry KangerTech starter kits also carry the coils (these are important now, since they weren’t a concern for Blus or Juuls as those have the coils/atomizers built directly into the cartridge) and more KangerTech hardware.

Your understanding of a KangerTech device is your graduation from the “simpler” devices, so to speak; if you can understand all the parts of a simple KangerTech EVOD kit, then you should no longer require a device that requires you to purchase a proprietary component in order to get the vape. At this point, you can begin to explore the wonderful world of juices (there’s billions of flavors waiting to be found) and even begin to mix your own. However, the point to drive home remains; if you can fully understand a KangerTech personal vaporizer, then you should begin to take more aggressive steps to quit smoking.