Alanna York, the driving force behind Controlled Chaos, was a successful business woman who had, aged just 26, opened her own beauty salon. She made the venture a profitable success and many would have been content with that alone, Alanna however was a perfectionist. She had endured years of taunting and banter at school, due to her big head of curly hair. As she gained experience from her growing salon based in Maine, she became frustrated at the lack of products that would help women with similar hair, to maintain a great looking head of curls.

The cosmetics industry in The United States is huge, the total market sales are projected to top $62 Billion in 2016, and hair care accounts for twenty percent of the total. Alanna knew, due to her own personal experience with curly hair, and her inability to find a product that worked specifically with her customers curls, that she had found a gap in that lucrative market.

The Controlled Chaos company was formed, and a period of research took place while formulas were tested. Alanna had formed the business with a partner, Erica Gray, and together the two had invested over $400,000 in the company. They launched a range of products, under the brand ‘Use Me!’, in 2012 at the Chicago International Beauty Show but things didn’t go well. 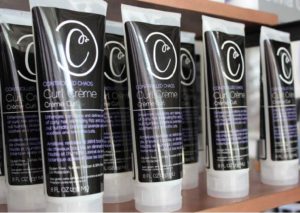 The wide range of products they had developed and were marketing, led to a division of focus, along with inventory and cash flow problems. The company was floundering and Alanna applied to appear on Shark Tank twice, but was unsuccessful both times.

By the middle of 2015, the company was on its last legs, sales had dwindled, mainly due to the inventory issues, and sales had totalled less than $300,000 in three years. Alanna made one last unenthusiastic application to shark tank, and was rewarded for her determination. She was accepted and made her pitch later that year.

Alanna appeared on the tank alongside Stylist and advisor Maureen Emerson, she was seeking $50,000 in exchange for 20% equity in the Controlled Chaos business, but the lacklustre sales of the company were sure to count against her.

She began her pitch by reminiscing about the suffering and endless jokes that she had suffered at school, due to her frizzy locks, and Maureen, who had a magnificent and healthy mane of curls herself, joined in as they tried to make the sharks see the suffering they had endured. They explained that due to their experience, they had developed ‘Use Me!’, now known as Controlled Chaos curl creme, to be the first creme specifically aimed at curly haired women.

Mark Cuban got down to sales first of all, and Alanna confidently asserted that they had totalled $300,000. Mark asked where the sales were taking place.

Alanna informed him the creme was mainly sold in salons, she continued to tell him that the company actually had ten products, but the curl creme was the only one the two were marketing in the tank. The talkative entrepreneur would have done well to leave it at that, but she began to dig a hole for herself.

She explained that she had brokered a distribution deal that required her to develop a range of products, the deal had subsequently fallen through and the business had been left with cash tied up in unsold inventory. She explained that she believed the curl creme was the best product of its type on the market and it was that product alone she was in the tank to promote, but she was beginning to make the Controlled Chaos business sound quite turbulent.

Robert Herjavec asked a few questions about sales and Alanna appeared to regain her composure a little.

Alanna attempted some damage control, somewhat unwisely she revealed that the company had stopped spending money, and in fact had stopped actually selling anything. ‘That’s always a good sign for a business’ observed Mark.

Alanna is probably a great stylist, but based on the available evidence, she doesn’t work well under pressure, at least in TV studios. She admitted that the money to replace inventory had run out, but hurriedly reassured the sharks that she had a great mind for business.

‘I don’t think so’ interrupted Kevin O’Leary, but Alanna continued her fast paced speech that was based more on her ever increasing panic, than any real business insight.

Kevin calmed things down a step and took Alanna through the basics. When asked how the business was doing, she admitted it was ‘Horrible, that’s why we’re here’, Kevin pushed some more and Alanna revealed her ownership of her own salon from a young age. She admitted that she had invested $300,000 of her own money in the Controlled Chaos start up, and that earned a roar of surprise from the sharks. Some further probing revealed that her salon business was booming, with a turnover of over $1 Million a year, but she couldn’t afford to invest any more in her second business.

Lori Greiner has a wide range of experience in the beauty market, she seemed intrigued by Alanna’s confidence in her curl crème and asked what made it so special. Alanna gave a characteristically roundabout answer that didn’t explain her experience in the beauty industry well and eventually Mark Cuban cut her off as she explained again why she believed in her product so much.

The Texan billionaire was unimpressed with the erratic entrepreneur and was fairly direct with her now. He said ‘I don’t invest in believe, I invest in do, I’m out’.

Kevin O’Leary however, had a pleasant surprise in store for the duo. He knew that most woman had curly hair, and the curly crème could be huge, to a laughing and slightly stunned Alanna, he offered the $50,000 investment, but in exchange for half of the business.

There were a few quiet moments, and then the Shark Tank had one of its more surreal periods, as several sharks embarked in a bidding war for a virtually failed business, but one that had a potentially red hot product.

Lori piped up with an offer, $51,000 in exchange for 50% equity. Kevin laughed along with everyone else at Lori’s $1,000 improvement on his own offer, he asserted to Alanna and Maureen that ‘I know hair!’.

Barbara Corcoran didn’t want to be left out of consideration, she told Alanna that she trusted her experience and intuition about the curl creme product, but she didn’t trust Alanna herself, due to her uncertain management abilities. Because of that, Barbara wanted a 51% controlling share in the business in exchange for $50,000, but she would only take 33% of the profits. Barbara emphasized that she knew how to grow the Controlled Chaos business, and that she would leave the creative side of things to Alanna, she re-iterated that she would only take a third of the profits and urged the entrepreneur to team up with her.

‘I want to say yes’ said Alanna, somewhat overwhelmed by the sudden reversal in her Shark Tank fortunes, ‘Then say yes’ replied Robert Herjavec, but Lori improved her own offer before anyone else could say anything.

The Queen of QVC offered a $60,000 investment, in exchange for half of the business, and she asserted her own ability to ‘move a product at lightning speed’. She told Alanna that she could help with the re-packaging of the product and sell a huge amount of units on her QVC sales platform. She pressured Alanna into accepting, banging her hand on the arm of her chair and suggesting her offer was available for just seconds more.

The sharks argued briefly before Robert restored order, eventually Alanna accepted Lori’s offer and Kevin and Barbara exchanged a look of disappointment as Lori got up to shake and looked jubilant.

Kevin insisted that the Controlled Chaos curl crème would be a big seller, Robert disagreed. ‘I know Hair!’ Kevin hissed at him, and Robert dissolved into hysterics.

Controlled Chaos Now in 2018 – The After Shark Tank Update

The path ahead for Controlled Chaos seems to be as gloriously healthy as Alanna’s curly locks. In an interview in April 2016, she revealed some of the progress the company has made since her appearance on the show first aired earlier this year.

The Controlled Chaos product itself has been improved, it is now gluten free and has been given stylishly designed new packaging. The website has also been completely redesigned and is far more user friendly than before. Alanna has been able to oversee the companies first independent facility, a brand new distribution center, and extra employees have been recruited to assist with the increased sales, administration and marketing that all the extra publicity has brought to the business. As for the extra interest, Alanna disclosed that over 10,000 units of Controlled Chaos creme were sold within two months of her segment airing. She also revealed that she had sold so many of the other products in her range, that she was reconsidering her decision to discontinue them.

Now that Lori Greiner’s expertise and assistance has improved the financial chaos that surrounded her business, Alanna is looking ahead to the future. She is currently in talks with a number of Canadian distributors, and is looking to reopen retail channels that were closed due to inventory difficulties in the past. She says that online sales have ‘Sky-rocketed’ and curly haired customers, as well as salon owners Worldwide, are flocking to buy her product, now that they know it exists.

Alanna wants to take over the World of curls, and she believes that with the new injection of cash the business has received, as well as the benefits of Lori’s business experience, nothing is going to rain on her parade. And even if it did rain on her parade, it probably wouldn’t matter. Controlled Chaos curl creme is guaranteed weather-proof, and sure to leave her looking as fresh as the company balance sheet.

Alanna has spoken about the pressure she felt during her appearance in the Shark Tank and has revealed how much it effected her afterwards, She felt so nervous at the time that she has blanked out the memory of being there. She believes that tenacity is the key to success, and admitted that a third Shark Tank audition was almost too much for her to bear, after being disappointed twice before. She advises other entrepreneurs to start small and build up from there, and above all, to never give up.