What Happened to Casey Anthony? What She’s Doing Now in 2018 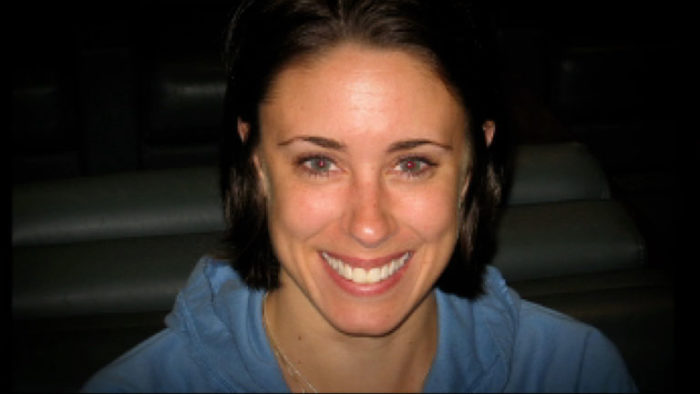 Casey Anthony, one of “America’s most-hated woman” is widely known throughout the nation for her connection to the mysterious disappearance of her two year old daughter, Caylee Anthony. Having given birth to her daughter in August of 2005, she lived with her parents with her then-fiance, Jess Grund, who acted as the daughter’s father. However at the age of two, Caylee seemed to have unexplainably vanished from her mother’s careーshe was last seen alive on June 15, 2008 by her grandmother. Almost immediately, suspicion pointed towards Casey; especially when she was found to be lying about her daughter’s past whereabouts. Caylee’s skeletal remains were later found in a wooded area near the Anthony home in December of 2008.

Despite substantial amounts of circumstantial evidence, Casey Anthony was ultimately found to be non-guilty of first degree murder, aggravated manslaughter and aggravated child abuse in 2011, much to the dismay of the public. At the end of the trial, Anthony was only found guilty of four counts of providing false information to law enforcement and sentenced to four yearsー two of which would later be thrown out at the appeals court.

Casey Anthony was later released on probation, after being imprisoned for a total of three years and one day. What has this infamous brunette been up to since? Where is she now in 2018? 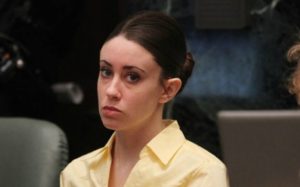 Born in Warren, Ohio on March 19, 1986, Casey Anthony is the younger of Cindy and George Anthony’s two children; she has one older brother. As a young girl, Casey had a normal lifeー she was often described as being a bright and outgoing child with many friends and a loving family. However things began taking a turn for the worse during her high school days, which according to her friends, was when she started a habitual pattern of lying.

Unbeknownst to her family, Casey had dropped out from high school altogether a few months prior to the graduation ceremony for her year. However,  not only did she convince her family that she will be finishing high school with full credits, but she had also told them that she would be attending the ceremony with the rest of her graduating classmates. It wasn’t until Casey was absent from the ceremony that her family learnt about the truth. Lying would eventually become second nature for Casey.

When Casey was 19, she began putting on a substantial amount of weightー so much that, her family had thought that she was pregnant. However when questioned by them, she claimed to be a virgin and had denied any possibilities of pregnancy. The truth about her pregnancy only surfaced after a family vacation to an uncle’s wedding. Throughout the vacation, Casey’s mother, Cindy, had repeatedly been told by other family members that her daughter looked extremely pregnant. It was only then that the family caught her in her lie.  By then, Casey was already seven months pregnant. The father of the child has never been revealed.

Caylee Anthony and Her Eventual Disappearance

While Casey was pregnant, she was engaged to a man named Jesse Grund. At the beginning, Casey had plans to give the baby up for adoption but was ultimately convinced otherwise by her mother. She kept the baby and began raising her while living at her parent’s home with Grundー who acted as the baby’s father. It was undeniable that little Caylee Anthony had absolutely loving grandparents.

However, something unfolded on the night of June 16, 2008. Casey had gotten into a heated argument with her mother after stealing an amount of money. Stealing money was nothing new for Casey but unlike previous times, that night she had stolen it from her grandmother. An intense argument ensued after she was confronted about it by her mother; the severeness of the quarrel led Casey to leave her parent’s house the next morning, along with Caylee.

Over the next few weeks, Casey’s mother had repeatedly called to check on her granddaughter. But every time she did, she was given the same answer by Caseyー that Caylee was with a babysitter named, Zenaida Fernandez-Gonzelez. It would eventually be known that a babysitter with that name never existed.

However her lies started to fall apart when her parents received a letter stating that Casey’s car had been found in a tow yard in Orlando. When her father went to pick up the car, not only did he find Casey’s purse and Caylee’s toys in the vehicle, but he also met with a strong permeating smell of organic decomposition from the trunk. Automatic red flags, Casey’s parents tracked down their daughter and found her living at the home of her new boyfriend, Tony Lazaro. She then confessed to her family that she had left Caylee in Orlando with the nanny, Zenaida Fernandez-Gonzalez and that the babysitter had actually kidnapped the little girl.

Police Involvement and the Discovery of the Body

It wasn’t until 31 days after two year old Caylee Anthony’s disappearance, that Casey finally reported her to be missing. However after questioning the mother, the detectives at the Orange County Sheriff’s Office grew increasingly suspicious as they found many discrepancies between her given story. The babysitter in question, Zenaida Fernandez-Gonzalez, was never previously mentioned by Casey and was not known by her family. Detectives later concluded that this nanny never existed, and was only made up by Casey when she was asked about her daughter’s whereabouts.

As officials organized an intense search effort to find Caylee, suspicions towards Casey Anthony grew as her actions in the days before her daughter’s disappearance was made knownーincluding partying, hanging out with various men, spending money from other’s bank accounts and getting a tattoo that read “beautiful life,”in Italian. Casey Anthony was officially arrested on suspicions of child neglect, filing false official statements and obstruction of a criminal investigation on July 16, 2008.

The next day on July 17 2008, scents of organic human decomposition was picked up by a cadaver dog in the trunk of Casey Anthony’s car. Hair, dirt and a stain in the trunk were also found by police. The skeletal remains of the two year old girl was later found in a bag in a wooded area near the Anthony’s home. The body had already decomposed to such a degree that while it was determined to be a homocide, the cause of death was unable to be identified. A piece of duct tape with a heart shaped sticker was also found over her mouth.

This discovery would later be the basis for the widely followed, capital murder trial of Casey Anthony. She was arrested on August 29,2008. 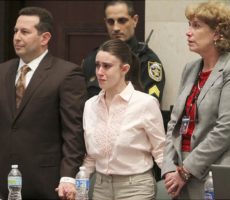 After the discovery of Caylee’s skeletal remains, prosecutors had made it widely known that they would be seeking the death penalty. The trial was finally underway in June 2011, three years after the little girl’s disappearanceー the entire nation was undoubtedly glued to the screen as the live trial dominated the news.

During the trial, Casey’s defence lawyer, Jose Baez told a very different story than that one that was given to the police earlier. According to the lawyer, two year old Caylee Anthony had drowned in the family pool on June 16, 2008 and George Anthony, her grandfather, had covered up the death so that her daughter Casey wouldn’t be arrested with child neglect.The defence attorney also shocked the courtroom when he stated in his opening statements, that George had also been sexually abusing Casey, ever since she was 8 years old. George denied such allegations.

The jury ultimately found her not-guilty of the charges on July 5 2008, as there was minimal physical evidence, only circumstantial evidence. Casey was only sentenced to four years in jail and $4,000 in fines after she was found to be guilty on four counts of providing false information to law enforcement. She was eventually released on July 17, after serving for three years and one day (two counts of providing false information were thrown out at the appeals court).

When the non-guilty verdict was announced by the jury, much of the nation was outraged. Casey’s defense attorney, Jose Baez, became almost as hated by the public as the girl herself. Most of the nation had expected her to be found guilty and believed that her death by lethal injection would be imminent. To this day, many individuals are still enraged with the fact that she was able to walk out of Orange County Jail only after serving a short sentence of three years.

What Has Casey Anthony Been Up To Now That She’s Out of Jail? 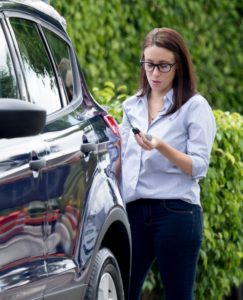 According to Casey’s defines attorney, the brunette, estranged from her family, has been living a life of solitude in her Florida home after the ordeal. Having accumulated over $800,000 in liabilities, she has also filed for bankruptcy in 2013. However, while she had been shying herself from the wary eyes of the public in the past, it seems that she has been spotted increasing more in the public as of 2016.

In January 2016, Casey Anthony was seen holding a yard sale, selling various floral pictures, vintage purses and china sets in her new Florida neighborhood. She seemed comfortable being in public and did not show any signs of trying to disguise herself. She was recognized almost immediately when a woman in West Palm Beach began checking out the bargains in front of the brunette. A large, muscular man was also seen helping Casey with the yard sale.

More recently in May, Casey Anthony has been spotted at a car dealership, picking up a new SUV vehicle. She was wearing a loose button-down shirt with jeans and did not seem to be too worried about being recognized in public. The vehicle which she purchased from the dealership was reportedly a Ford Escape, which starts at ~$25,000.

The pariah mom has also ventured into something that none of us had seen comingー photography. Despite years of living in recluse after the murder case of her daughter, she has now launched her own photography business in South Florida, called “Case Photography.” In order to showcase her photography, Casey Anthony has also set up various blogs, online slideshows and even a Facebook page; however it would seem that those pages  been met with nothing but threats and abusive comments.

Lately, Casey Anthony has also been back in the spotlight after being rumored to have provided sexual favors in order to pay for Baez’s attorney fees. According to Dominic, D&A Investigations owner, Casey had been seen running out of Baez’s office, naked back in September 2008. However despite such reports, it’s still hard to determine for sure whether or not such events actually occurred. One thing’s for sureー people won’t be forgetting about Casey Anthony anytime soon!