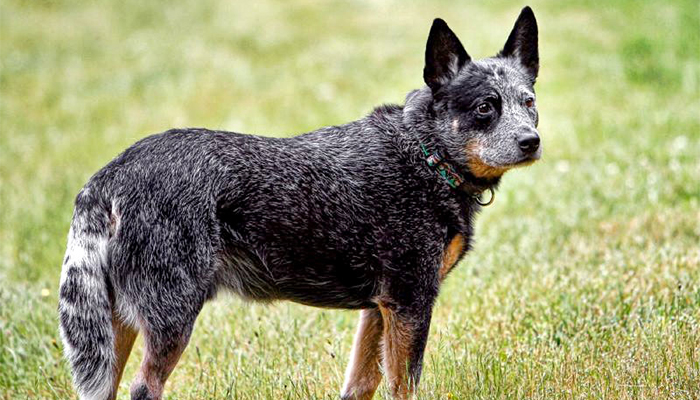 We all know that dogs are fairly smart animals, and that’s true to a degreeーthey can be trained to give high fives and to only go potty on one section of your lawn, but it’s also true that they sometimes do things that make us question their intellect. If you’re a fellow dog owner, then you’re probably familiar with the situation of having your four legged friend trying to eat random poop or garbage off the ground when you’re walking down the streets, heck sometimes they even try to gulp down their own vomit after throwing up! So how smart is Fido, really? Well according to various behavioural measures, the mental abilities of our canine friends are close to that of a human 2.5 year oldーsurely that must mean something in terms of their intelligence, right?

Okay, so let’s talk about some of the things that dogs are capable of doing. While they’re not perfect at the beginning, they can be potty trained, usually around the one year markーthat’s earlier than when tiny humans  are able to use a potty! Dogs are amazing learners, given the right motivation (for most of them, this means food); they can learn how to play dead, shake a paw, read sign language, heck, some of them can even sniff out cancer or bombs before we’re even aware that they’re there! But do dogs have a similar intelligence level regardless of their breed? Or do different breeds have different levels of brightness?

The answer to that isーyes, different breeds have different levels of canine intelligence; some breeds are inevitably brighter than others. While we can’t just give an IQ test to a dog like we can for a human, there are many behavioural tests that we can perform to achieve a reasonable estimation of a dog’s mental abilities. Typically, we’d observe how they would behave given a certain situationーfor example, how long would it take Fido to problem solve and figure out how to get the beef liver treats out of his chewy, puzzle toy? Throughout the years, numerous tests and surveys have been conduced in order to determine the smartest of all dog breeds. Below, we will be discussing ten of the top smartest dog breeds in the worldーwill Fido make the list? 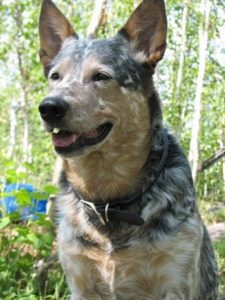 A herding dog from Australia, the Australian Cattle Dog ranks tenth on our list of most intelligent canines. As a working dog, they were originally bred for its ability to drove livestockーthey were first bred by cattle farmer, Thomas Hall during the 19th century. Extremely intelligent, Australian Cattle Dogs responds well to training and typically form long-lasting bonds with their owners. A highly energetic breed, they require plenty of exercise and will often feel restless if not given a job to do; dog sports such as agility may also work well in engaging both their mind and body. As a pet, they are extremely affectionate although they can be quite reserved with strangers; due to this, they inherently make excellent guard dogs. They stand at an average of 18 inches tall and can weigh anywhere between 35 and 50 pounds.

Although this breed often comes with unwanted stigma in society, it’s no doubt that they are in fact, one of the most intelligent dogs in the world. As one of the oldest breeds of herding dog, the Rottweiler has a long, rich history that is thought to date all way back to the Roman Empire. Known for their striking black coat, they are excellent at herding and working with livestock such as cattle. A highly intelligent breed with great guarding instincts, they are always willing to work and are excellent at adapting to different environment and situations.  Rottweiler tend to have a calm, confident demeanour and are very devoted and eager to work for their owners. As a medium-large breed, they stand on average, 25 inches tall at the withers and weigh anywhere from 110 to 130 pounds for males and 75 to 105 pounds for females. 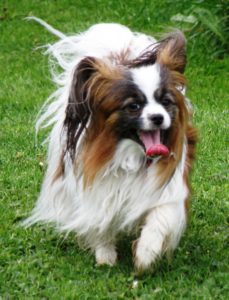 Recognized for their characteristic butterfly-like appearance, Papillons are cute, small and incredibly smart. As one of the oldest toy spaniel breeds, their history can be traced back to many famous paintings circa 1500ーthey have even been long associated with the royalty (Marie Antoinette was said to have carried one in her arms to the guillotine herself!). A happy and friendly dog, the Papillon tend to have great temperaments, making them excellent family pets. Extremely bright, they also learn new tricks very fast given the proper training and motivation. However despite their small size, they still require plenty of exercise every day; due to their intelligence, they are also known to excel at various dog sports including agility, and rally obedience. The largest Papillons can weigh up to 10 pounds, and 11 inches tall.

One of the most popular breeds today, the Labrador Retriever is one off the most intelligent, and affectionate dogs in the world. The Lab, as it’s often affectionately referred to as, has a long history tracing back to the 1880’s and was originally bred to be an all-around hunting dog and retriever. Known for their extraordinary temperaments, Labradors are friendly, outgoing and are often great with small children. An extremely intelligent breed, they excel at many activities including tracking, hunting and also make excellent detection dogs. To top it off, they are also the most commonly used guide dog breedーa fact which says volumes about their intelligence. Powerful and adept in the water, Labs have also been used in water rescue. A fairly large breed, they stand close to 24 inches and can weigh anywhere between 55 and 80 pounds. 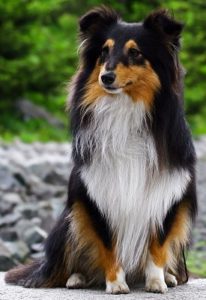 More commonly known as the Sheltie, the Shetland Sheepdog originated from the Shetland Islands and was first registered as a breed during the early 1900’s. Known for their Rough Collie-like appearance, Shelties are incredibly intelligent and willing to pleaseーmaking them excellent working dogs. One of the brightest dogs in the world today, studies conducted by experts on animal intelligence have shown that Shelties are able to learn a new command or trick, in under five repetitions. Agile and highly trainable, they also do well competitively in agility, herding and obedience. But don’t let their small size fool youーthey still require plenty of exercise in order to stay healthy and in tip top shape. A medium breed, they can grow to be 16 inches tall at the withers and weigh up to 24 pounds.

Known for their intelligence and loyalty, the Doberman currently ranks fifth on our list. Originally developed around the 1890s in Germany, the breed was first bred by tax collector, Karl Friedrich Louis Dobermann, who often found himself treading in dangerous territory for his collectionsーthe Doberman was ultimately developed to protect him on his trips. Although they have often been stereotyped by the media as being aggressive, the breed can in fact, be very sweet and obedient; often times, those dogs who are used solely for the purpose of personal protection are the result of inappropriate breeding. One of the most trainable breeds of dogs, the Doberman excels in a large range of mental tasks including problem solving, learning and communication. A fairy large dog, they can grow up to become 28 inches in height at the withers and weigh up to 100 pounds for males and 80 pounds for females. 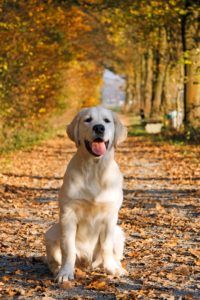 Perhaps one of the most friendly, and widely known dog breeds in the world, the Golden Retriever could possibly be the most easy going, and intelligent dog in the worldーwhich makes it deserving of the fourth spot on our list. Originally bred for wildfowl hunting during the mid 19th century in Scotland, the Golden Retriever are excellent swimmers and do well at retrieving shot game. Incredibly easy to train, they are common front contenders at conformation shows and are also often used as disability assistance dogs due to their gentle, yet eager to please demeanour. Golden Retrievers make excellent family dogs and are especially patient with small childrenーin fact, they are the third most popular breed of family dog in the United States. They can stand up to 24 inches in height and weigh up to 75 pounds.

Recognized for their striking black and tan coloured coats, the German Shepherd is one of the most well known breeds of dog in the world. First bred in 1899, the dogs were originally developed for the guarding the herding of sheep. Today, they have grown to be commonly used in work such as search and rescue and disability assistanceーthey are also often part of military and police K9 teams due to their extreme obedience, trainability and intelligence. A fairly active breed, the German Shepherd is always eager to work and are incredibly fast learners; they can also make good guard dogs although training and socialization is highly recommended so that they will not become overprotective of their family members. They are currently the second most popular breed in the U.S., behind Labrador Retrievers. German Shepherds can grow up to become 26 inches tall and can weigh up to 88 pounds. 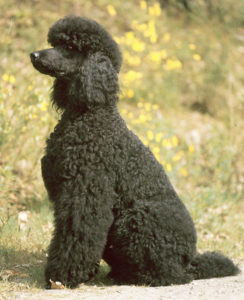 As the world’s second most intelligent breed of dog, the Poodle excels in a number of dog sports including tracking, obedience and agilityーthey have also been commonly used as disability assistance dogs. Contrary to popular belief, the Poodle hails from Germany and not from France as many people seemed to have believed. Originally bred for duck hunting and water retrieval, the breed has now grown to become one of the  world’s most recognized breeds of dog. Although Poodles were initially only available as a “standard size”  during the breed’s infancy, there are currently four recognized sizesーtoy, miniature, medium and standard. A highly sociable and trainable breed, they are excellent learners and do great as family pets. Poodles can range anywhere from 5 to 55 pounds depending on their size.

The Border Collie currently ranks first as the world’s smartest breed of dog. Originally developed in Northumberland, a county bordering Scotland and England, the breed is an excellent work dog and is fantastic at herding livestock such as cattle and sheep. Agile, energetic, obedient and intelligent, the Border Collie also does amazingly well in dog sports such as agility, as well as sheepdog trials. In addition to needing a remarkable amount of physical exercise, the breed also requires considerable mental stimulation every day for ideal behavioural wellness. While they may not be the dog of choice for many due to their high exercise requirements, for those who are able to provide them with their (fairly demanding) physical and mental needs, they do in fact, make excellent four legged friends. They can grow up to become 22 inches at the withers in height and anywhere from 25 to 45 pounds in weight, depending on their gender.