The Best Smartwatches in 2018 – Reviews & Comparisons 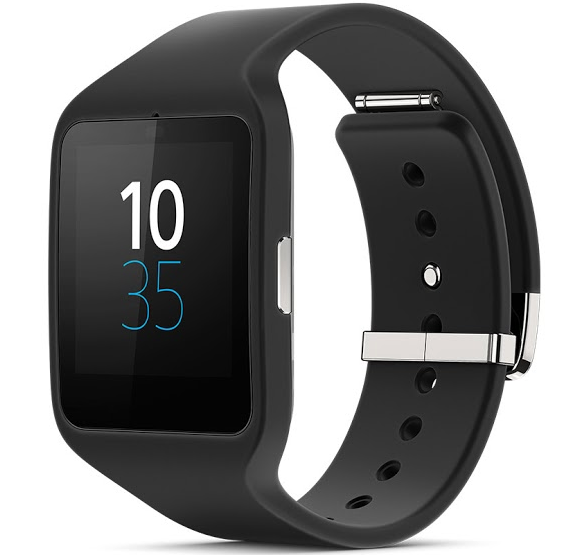 The Best Smartwatches in 2016- Reviews & Comparisons

Announced on March 2014 and released September 5th 2014, the Moto 360 is an Android Wear based smartwatch based on the circular design of traditional watches with the features to put it on par with some smartphones. The Moto 360 was Motorola’s flagship entry into the world of wearable technology, touted as being revolutionary because it had a circular display. Let’s see if those claims stack up to reality.

First, let’s start with design. The Moto 360 has a circular face similar to classic watch styles. The display is a 1.56in (40mm) LCD screen with RGB Matrix, with a fair 320×320 pixels (205ppi). The glass is Corning Gorilla Glass 3. The display comes in different finishes. The wrist bands come in metal and leather and can be removed and replaced at will. At first glance the Moto 360 looks all right from the top, and although it isn’t ery heavy at only 49 grams, it’s noticeably thick and it protrudes rather unattractively from the wrist unlike a normal watch which should lay flat.

Now, on to battery life. Before its release Motorola claimed its new watch would get 2.5 hours of battery life, and the lie detector test determined that was a lie as the Moto 360 gets one day of mixed use at best. One cool feature is that it utilizes wireless charging and the small 320mAH battery can get up to 50% in only a half hour charge. Don’t be fooled by the name though you won’t be able to charge your watch remotely, you have to fasten the metallic back of the watch to a magnetic charging stand., making it no less inconvenient than a standard plug in charger.

As far as inputs there are dual microphones, the ambient light sensor, optical heat rate monitor, the 9axis pedometer, and the capacitive touch screen. Although there are some fitness features it’s clear that this isn’t intended to be a fitness watch, the heart rate monitor isn’t completely accurate, it takes several attempts to get a reading which is no surprise considering how thick this watch is. Even if it does work you can only record 30 minutes of heart activity per day.

The Moto 360 was released with Android Wear OS version 1.3.2 which is based on Android 4.4W.2, these days it runs Android Wear 2.1.1 based on Android 5.1.1 and it should work with any phone running Android 4.3 or higher. Although the watch functions will work just fine on their own to truly utilize the “smart watch” features you will need to pair your device with an Android phone. Pairing also has the added bonus of unlocking features like Google Now, Search, Navigation and playing music.

Originally Motorola claimed you could use your watch up to 150ft from your phone, however, testing has indicated that figure is closer to 30 ft. Also it doesn’t show relevant apps.
The brains behind the Moto 360 is a 1GHz Cortez A8 with memory of 512 Mb LPDDR and 4G of storage. This isn’t a lot of storage but considering this device is mainly just a wrist display for notifications from your phone it’s unlikely you’re doing anything with it that would require substantial storage.

All in all the Moto 360 is a politician’s watch, it promises big but it fails to deliver, or it under delivers in many respects. The processor is sub-par, there are many software bugs, and the wristband shows signs of use very quickly. Still, the phone wasn’t all bad, if you’re looking for a wrist accessory to show you notifications from your phone than this is it, at a price of ~$250 it’s not going to break the bank either. 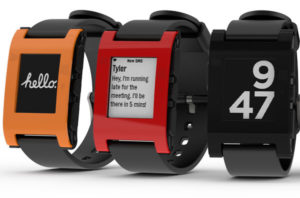 Develop by Pebble Technology, Corp. the Pebble smartwatch is a diverse piece of hardware capable of communicating with both Android and iOS devices at the astonishingly low price of $89 for the Pebble and $149 for the Pebble Steel.

Pebble has one of the more unique origin stories in the wearables community. The Pebble smartwatch was originally funded via the crowdfunding platform Kickstarter. They raised a whopping 10.3 million dollar from that platform alone, making the most funded venture in Kickstarter history at that time. From there the concept only grew further.

Best Buy became the first major consumer electronics company to sell the Pebble smartwatch and they sold out within 5 days. With millions of units sold to date Pebble has release the second generation Pebble Time Steel in August of 2015, and just recently on September 24th 2015 they announced a third generation Pebble smartwatch to be released in 2016 known as the “Pebble Time Round”.

This watch has a 32mm 144×168 pixel black and white memory LCD that uses a low power “transflective LCD” with a backlight, vibrating motor, magnetometer, ambient light sensor, and a three axis accelerometer. The black and white LCD pales in comparison to the high quality color screens you would find on premium smartwatches, and unlike these premium smartwatches the Pebble only displays text and numbers it cannot render images or photos.

One of the bonuses of this low-tech screen is that the battery lasts up to seven days, unlike most premium watches which hardly make it to 2 days. Bluetooth 4.0 connects Pebble to your smartphone and this watch can be submerged up to 40m (130 ft) in both fresh and salt water. This is a refreshing feature since most smartwatches can barely last 10 minutes in shallow water (less than a few feet) without malfunctioning.

The Pebble has its own operating system known as Pebble OS, because of this you can’t add any external apps but it does have 1,000 or so apps on its store. As far as storage it has 800KB of accessible space, not much but considering you likely won’t be saving anything on here it should suffice for the occasional alerts it displays from your connected smartphone. 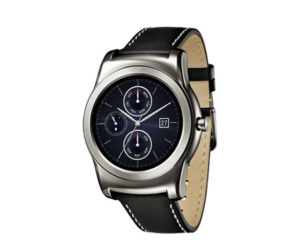 This watch has an internal storage with 512 MB of RAM. 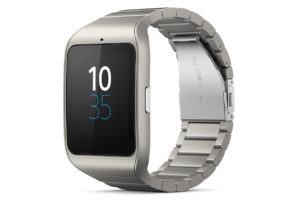 Sony unveiled the SmartWatch 3 at IFA 2014, the third generation of its smartwatches. The SmartWatch 3 has new features as well as updates to some features such as new waterproof IP68 rating, more stylish design, a transition to Android wear, and it is the first smartwatch on the new Broadcom platform.

One of the biggest improvements though, and the one that will probably attract the most customers is the built in GPS system. This way, the Sony SmartWatch 3 doesn’t rely on a Bluetooth connection to get you from point A to point B. This also has the added bonus of letting you get where you need to go without pulling out your phone. Not to mention the GPS utilizes 5 satellite systems to get the most accurate reading of your present location.

As far as storage the SmartWatch 3 has an adequate 512MB of ram. The new design incorporates both sporty elements as well as stylistic ones while also retaining the multi touch capacitive touchscreen of older models, the SmartWatch 3 is sleek and metallic but it handles like a sports watch. The SmartWatch 3 is compatible with Android 4.3 and up.

The SmartWatch 3 combines sophisticated design and hardware construction for only $200-$250. Furthermore the transflective lens on the SW3 offers the best daylight readability of any smartwatch and the best battery consumption in its class, making it both a great casual and fitness smartwatch. 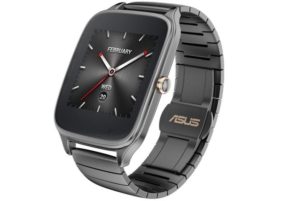 Officially released on November 2014 The Asus Zenwatch is perhaps the most attractive of the Android wear smartwatches. It comes with Android wear OS and is compatible with smartphones running Android 4.3 or higher that support Bluetooth LE.

The Zenwatch is IP55 certification for water resistance. It comes equipped with a brown leather strap with a rose colored band on the side of the bezel. The bezel itself is a brushed silver. The strap is soft and noticeably durable, however, it is thick. Likewise, the bezel is quite large and may appear gangly on petite users. Luckily the strap can be easily replaced for another if you don’t like it.

Features included in the Zenwatch are the pedometer, a heart monitor as well as voice commands via the Google app. However if you intend on using this device with the hopes of monitoring your heartrate while working out, or keeping track of your steps, you’re going to be disappointed as both the pedometer and heart monitor are quite inconsistent.

Nevertheless, the watch was quick and responsive although the voice commands were also inconsistent. Needless to say, this is a watch that is great for everyday use, and it looks great, but as far as fitness features you’re going to be quite disappointed with the Asus Zenwatch.

The processor is a power hungry Qualcomm Snapdragon 400, the watch has 512 MB of memory and 4 GB of storage. The screen is a 1.63 in 41mm Super AMOLE that is 320 x 320 pixels with 278 ppi, making for a bright and vibrant touchscreen experience. The body of the watch has no buttons and the screen is always on. All of these features drain the battery fairly quickly, the Zenwatch battery will require recharging at least after a day and a half of use. 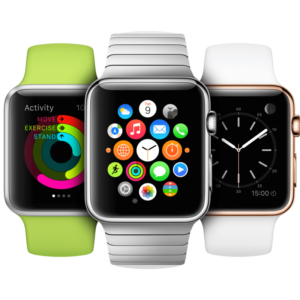 In terms of battery life it should last you around 18 hours of use, requiring 2.5 hours to achieve an 80% charge.

Apple’s patented Retina Display is used on the Apple Watch for clean and crisp screens. 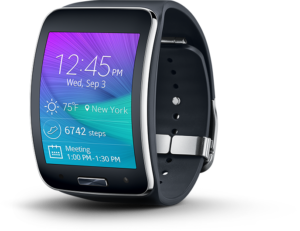 The Samsung Gear S is the successor to the Samsung Gear 2, released on November 7, 2014, it was known as the “Smartwatch to lookout for” with many believing it to be the worthy rival to the Apple Watch. The Gear S is similar to older versions of the Samsung Galaxy Gear but with some much needed upgrades to put it up to par with the major players in the wearables industry.

The Screen is a large 2 inch curved Super AMOLED display with a rich, user friendly interface. Users can read messages and notifications comfortably without straining their eyes on small print. The curved design was a good move considering the large size of the screen, this way the bezel fits comfortably along the contours of the wrist. Users can also express themselves by changing the screen wallpaper and the watch straps.

Users can stay connected to friends by sending messages straight from their watch via the on screen keyboard, they can also make and receive calls directly from their watch, or they can get their phone to forward calls to their Samsung Gear S.

Also, get turn by turn directions via the navigation system, 24 hour financial news, as well as around the clock notifications from your social media applications. Not only does the Gear S do that but it also has features to support a fit lifestyle such as GPS, Nike + running application, Music players, and so forth.