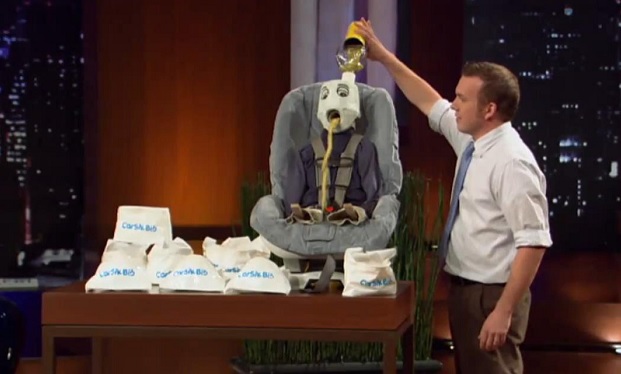 Les Cookson became an entrepreneur when he realized his children were prone to car sickness. Many, if not all parents can sympathize with this issue. Sometimes it can be a real challenge getting the kids from one point to another when suddenly there is a mess in the backseat. There are many remedies out there to help avoid car sickness, but sometimes rolling down the window for some fresh air just isn’t enough.

While Les was traveling with his wife and kids, he was struck with an idea. Surely there hadd to be a better way to deal with child car sickness. He and his wife were tired of dealing with the odor and mess every time one of their kids got sick. So, what if he created a new kind of bib to minimalize the mess?

The Carsik Bib is a rather simple product. It’s a kind of “barf bag” that is completely hands free. By adding a little pouch to the end of it, Les hoped that any and all throw up would be contained there. To him it seemed like a brilliant idea. All parents should jump on the opportunity to have a cleaner, less stressful car ride. However, being new to the realm of business, Cookson would need some help. He packed up his Carsik Bib pitch and headed to the Shark Tank. Hopefully one of the Sharks could relate to this parental struggle and see the potential in his product.

Cookson enters the Shark Tank seeking a $30k investment in exchange for a 15% equity in his business. After that he jumps straight into a rather crude demonstration of what it’s like to have a car sick child. Then he explains that around 58% of children suffer from car sickness so parents are no stranger to this issue. And every time a child gets sick it’s always a big ordeal. You have to rummage around for napkins and water bottles, hoping to clean up at least some of the mess. That’s where the Carsik Bib comes to the rescue.

By strapping on this bib that has a deep pouch at the bottom of it, you avoid all the mess and strife. When 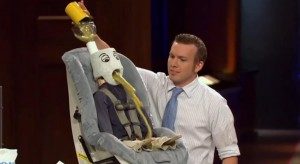 your child gets sick, all of the vomit should go directly in the bib which can then be thrown out immediately. There’s also a pad in the bottom of the pouch that absorbs liquid and eliminates odor. Cookson demonstrates how it works to the Sharks and they all immediately start cracking up at the display.

Robert Herjavec inquires on the inspiration behind this product while Barbara Corocran wants to know when
exactly she’s supposed to strap the bib on. Being the father of two young boys who experience car sickness, Cookson knew that he needed to remedy this issue. His own children inspired the brand and since having made it, he usually puts the bibs on them at the start of every car ride. It may seems a little silly or tiresome, but there are kids out there who get sick only 15 minutes or so after driving.

Cookson then hands out samples of the Carsik Bib to the Sharks. They all examine it with smiles and giggles, clearly not taking it as seriously as Les was hoping they would. He has been making these prototypes from home and uses whatever materials are available to him. The bib is made out of a shower curtain that he had cut up and the “pad” in the bottom is the middle section of a diaper. Cookson knows it’s far from being a polished product, but that’s why he is in the Shark Tank. He wants one of them to help him make a cleaner design and work on proper advertising. All he thinks he needs is that financial backing and a little marketing experience tomake the Carsik Bib the next biggest thing.

The guest Shark of the night, Jeff Foxworthy, doesn’t exactly think the idea of having a child ride around with a pouch full of vomit is such a great idea. Who would want to sit around with a bag of vomit sitting right under your nose? If anything, it might make the child even more sick than before. Daymond John agrees and claims that his own children would have ripped the bib off. Despite their doubts, Cookson has made some sales. After putting around $1,300 into the business, he sold 160 bibs. This isn’t a lot in sales, but he has only been running a small site online. It hasn’t received a lot of traffic online, but that is to be expected. Cookson doesn’t have the money or experience to properly launch the business. The Carsik Bib needs one of the Sharks to help get it started.

John is the first Shark to make his decision as to whether or not he should invest. To him, it just generally seems like a poor idea that isn’t going to make it very far.. Next is Kevin O’Leary who doesn’t want the Carsik Bib on his resume. It’s a borderline silly idea that he just wouldn’t be able to justify putting a $30k investment into. 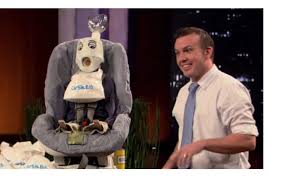 Shortly after that, Foxworthy then brings up a very valid point. Leaving a child out of your reach while you’re driving with something around their neck is a recipe for disaster. He wouldn’t want to be held responsible for something going terribly wrong with the product. Cookson doesn’t seem to think there is a safety hazard with the bib. He claims that he has tested it on younger children. This doesn’t convince Foxworthy, so Cookson is forced to respect his decision not to make him an offer.

That leaves two more Sharks in the Tank, but the odds of them making him an offer don’t look so great. Herjavec enjoyed the presentation, but only for is comical understones. Both he and Corcoran agree that the bib is a bad idea because it runs the risk of choking a child. Neither of them would want to hang this bib around the necks of their children. So unfortunately they both are not going to give him an investment. Cookson is clearly disappointed, but makes no attempts to argure with the decisions of the Sharks. He now has to walk away from the Tank without a new investor in his Carsik Bib company.

Carsik Bib Now in 2018- The After Shark Tank Update

After appearing on the show, not much became of Les’s Carsik Bib. He had a lot of faith that the product would be worth something, but he simply couldn’t get it off the ground. That didn’t hold Les back from making other inventions though. Being someone with a creative mind, he had a lot of concepts up his sleeve.

Despite his failure in the Shark Tank, Les used the Carsik Bib’s social media platform to promote his new
ideas. He created a few Kickstarters for new products, which actually ended up being quite successful over the past few years. Les began selling various art products such as camera obscuras and optical toys.

If you’re interested in taking a peek at Cookson’s other business, you can visit his website http://www.ancientmagicarttools.com/. You’ll find that the products themselves are actually quite interesting and relatively affordable. And despite the fact that these products are definitely a lot different from his child friendly “barf bag”, it seems like this niche in the art realm suits him much better.