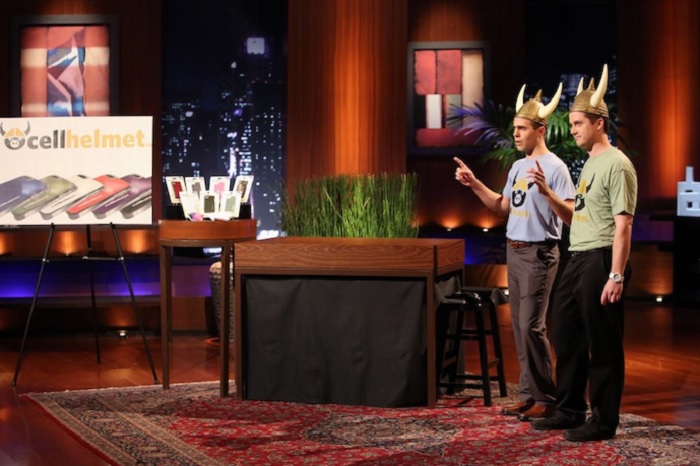 The founders of CellHelmet, David Artuso and Mike Kane from Pittsburgh, Pennsylvania, were only too familiar with that sinking feeling you get when you accidentally smash the screen of your favorite mobile device. They thought that all of the protective screens and cases that could be bought to protect smart phones, were substandard in one way or another.

The two entrepreneurs came up with an original business idea centered around the problem. They designed a new, tougher protective case for smart-phones, that could be built from thermoplastic polyurethane rubber, a tough durable material that was also very light-weight. Using such a material would allow them to manufacture a much lighter and more convenient cover for phones, but they also planned another, even more attractive benefit to their customers.

They devised a strategy that would involve them teaming up with a large insurance business to offer an additional safety net of protection for customers, if a phone broke when it was contained within a CellHelmet case, they would guarantee to either repair the device, or replace it, if repair proved to be impossible.

In January 2012 the pair launched a Kickstarter campaign in order to fund the manufacturing process, and their original idea caught the imagination of the crowd-funding community. Their original target from the campaign was only $10,000, but 40 days later when the campaign ended, they had achieved funding of over $19,000 with the assistance of over 300 backers.

The entrepreneurs launched the CellHelmet business immediately after the Kickstarter campaign ended, but being aware that the more investment they could attract then the more quickly they could expand their area of operation, they began a campaign of contacting Shark Tank producers to secure a slot on the show. Their persistence paid off, when after five months of ‘Smoozing’ the shows producers, they were finally accepted to appear on Shark Tank.

David and Mike appeared to enter the tank suitably prepared for a bashing, with Viking helmets on, but in reality it was just to support the company logo, which featured such a helmet, to demonstrate the protective qualities of the product.

The headgear made the sharks smile as the entrepreneurs entered the tank, and after introducing themselves, the pair revealed they were hoping to gain a $160,000 investment, in exchange for 20% of the CellHelmet business. Mike explained that CellHelmet provided a unique service for customers, the accidental damage insurance protection for every phone that was damaged when the CellHelmet case was being worn. David elaborated some more, telling the sharks that the company would guarantee that any damaged phone sent to them by a customer would be repaired, and if it couldn’t be repaired then they would replace it.

They demonstrated a few competitors products for the sharks. One screen had been advertised as being able to withstand an impact from a boat anchor, and the pair happened to have a small boat anchor with them. One quick thump on the screen with the boat anchor quickly showed that the competitors claims were not entirely accurate. A second demonstration followed, this time on a screen that was allegedy immune to being hit with a baseball bat, with the aid of a handy bat, David soon showed that claim to be equally untrue.

David told the sharks that CellHelmet provided no guarantees about their product at all, only that they would repair any accidental damage that a customer’s phone received. In addition, their case was lighter, and tougher than other phone case, due to its patented and original manufacturing process.

Lori Greiner inquired about the insurance element of the deal. Mike explained that the CellHelmet company was effectively pre-buying any potential damage that a customer’s phone incurred. Customers would buy a CellHelmet screen for $44.99 and automatically receive one year of accidental damage coverage. The company operated a 24/7 hotline for customers and guaranteed that they would either repair or replace the damaged phone.

Kevin O’Leary exploded in sudden anger at that revelation, he shouted at the duo, calling them ‘Nothing Burgers’, which was original – even for Mr Wonderful. He asserted that the mobile phone industry was worth countless hundreds of millions of dollars each year, and the CellHelmet business was nothing in comparison.

Mark Cuban defended the pair, reminding Kevin that the CellHelmet company had only been in operation for four months, which actually made 1,300 units sold a fairly impressive start for a business. The Texan shark asked Mike what the average repair cost to a phone was. Mike admitted that each phone repair cost an average of $77, but the company did have a ‘fee’ of $50 that they charged for repairing phones.

Kevin O’Leary asked what percentage of customers sent their phones back to the company to be repaired, Mike told him it was approximately 3%, but pointed out that the company didn’t actually lose money in that small percentage of cases.

Mark Cuban was concerned that anyone who had broken their phone could simply buy a CellHelmet case, and then claim that their phone had broken inside it, thereby gaining a cheap repair from the company. David admitted that there would always be people who would take advantage of any system, but stressed again that the $50 repair fee would prevent the company from losing on the deal.

The sharks probed Mike and David some more about the cost of repairing customers phones, the entrepreneurs attempted to defend the concept but the sharks were clearly concerned about the potential cost to the business, and the possibility of people buying CellHelmet cases just to get a cheap phone repair from the company.

Kevin O’Leary had not changed his opinion of the CellHelmet concept, he told the entrepreneurs that he was glad they had worn Viking helmets, due to the fact that he found the whole concept of the business so horrible, that he wanted to put the pair on a boat, set it on fire and float it out of the tank, in the manner of a Viking funeral. Just to make sure that his feelings were completely clear, he confirmed he was out, with extreme prejudice.

Robert Herjavec announced that he wasn’t a big fan of the phone accessories market, he had little interest in the market and could see no real growth for the CellHelmet business model, and because of that Robert was out too.

Lori agreed with Robert wholeheartedly, she added that she saw CellHelmet as a ‘Cellphone hospital business’, but felt that it should really be a ‘Cellphone Emergency Room Business’. As CellHelmet could not repair or replace phones overnight, she saw no real future for the company. And with that Lori dropped out of the negotiations.

Daymond admired the added insurance element of the CellHelmet business, he thought it was a great service to provide, but he felt that too many people would take advantage of the guaranteed replacement offer and the strategy would ultimately end up costing the business far too much of its profits. With that Daymond was out too.

Mark Cuban was more positive about the Cellhelmet concept, he understood the strategy behind it, but he did have one big concern about the future of the company. As nothing about the service provided was patent protected, any large competitor could begin to offer exactly the same service with a far greater marketing budget to advertise it. Mark believed that as soon as CellHelmet achieved a reasonable level of business it would be pushed out of business by the big players in the wireless market.

Mike had one last attempt to salvage a deal from the tank. He told Mark Cuban that if another, larger competitor began providing the same service, it would simply validate the idea as a sound business concept

The Cuban Shark clearly felt that Mike had misunderstood his point, he replied ‘Bullcrap’ to Mike’s response and quickly added that he too was out.

Kevin O’Leary had the last word. Almost cheerfully he announced ‘Sven and Thor, it’s time for you to get on the boat, and float away’, as the other sharks laughed.

CellHelmet Now in 2018 – The After Shark Tank Update

Although the Sharks were unable to see much opportunity for growth within the CellHelmet business, David and Mike have achieved a fair amount of success in the three years since their segment was first shown. The day after the show they made a statement on their Kickstarter page thanking all their backers for their support, but they also had some good news to share for their followers.

David and Mike were pleased to announce that they had secured investment from two local investors in Pittsburgh since filming had taken place. The new investors brought wireless industry expertise to the CellHelmet business and allowed an immediate retail outlet for CellHelmet, as they owned 15 Verizon stores in the area.

That early expansion opportunity, combined with the increased interest in CellHelmet that came from their appearance on the show led to even greater successes. They have increased the number of Verizon stores in the Pittsburgh area that their product is featured in, and hope to branch out into other Verizon stores farther afield later in 2016. As for the initial rush of interest in the business after the segment was first shown, another 2,000 CellHelmet screens were sold in the following 24 hours. One month after the show was aired the business had achieved sales in excess of 10,000 units.

The public awareness of CellHelmet, and the great interest shown in the product after the show, has enabled the business to increase the retail locations that the product is available in, and now in 2018 CellHelmet can be found in over 3,000 wireless stores throughout the country.

The company has increased the range of accessories it supplies too. CellHelmet now provide magnetic phone stands, tempered glass screens for even more protection, and selfie-sticks, as well as conventional chargers and cables.

The successful growth of the CellHelmet business, and the availability of the companies products nationwide seem to indicate that on this occasion at least, the sharks failed to recognise the huge potential market for CellHelmet products. For David Artuso and Mike Kane it has been a long, and sometimes difficult, road to success, but one that they have finally conquered.

The Sharks may have dropped the idea of partnering with the business, but just like a CellHelmet protected phone, the entrepreneurial brains behind the company never let it break them beyond repair, and they can look forward to a long profitable journey ahead, without having to share any of the profits with shark investors.