With the help of his father, Tyler was able to create his first Leaux Racing Trikes prototype for a sixth-grade science project. His teacher was not a fan, but Tyler was still able to win first place in the San Diego science fair. Several years later, Tyler was able to perfect his design, and bring it to Kickstarter, where he made 300x his goal. Would the Sharks be as impressed? Let’s take a look. 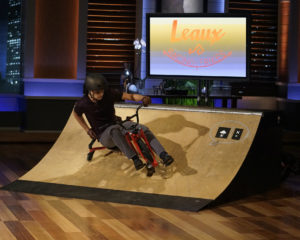 Tyler rode out into the Shark Tank on his invention, the Leaux Racing Trike. Barbara and Robert looked amused as Tyler got off the trike, and told that that that, indeed, just happened. He told the Sharks that he was seeking $120,000 in exchange for 20% of the company. Tyler continued, explaining that the Leaux (pronounced “low”) Racing Trike was as if “a race car and a tricycle had a love child. Robert laughed heartily at this. Tyler said that the three wheels of the trike provide stability and agility, as well as speed.

Tyler put on a helmet and got on the trike as he explained that the three wheels are casters which are controlled by a handle in the back. That allows you to “take tight corners, drift, and even spin 360 degrees.” Tyler completed each of these feats as he spoke. Tyler got off the trike, and told the Sharks that his product was unlike any other, and he wanted to show it to the world. As soon as he asked the Sharks who wanted to join him on the ride, Robert got up and said that he had to try it.

As Robert made his way to the stage, Lori asked if it was meant for a particular age group. Robert looked slightly offended. Tyler said that he had two more sample trikes, and invited Mark and Kevin onto the stage. As Kevin took off his suit jacket to join Robert on the stage, Robert asked Tyler if the trike could fit the 6’3” Mark Cuban. Tyler told him that the trike was fully adjustable, even up to that size. Mark attempted to put on one of the helmets, but it did not fit on his “big ass” head to the amusement of Lori and Barbara.

While this was going on, Robert was playing with the trike, and laughing manically. He pedaled quickly down the hallway, and pulled the back lever, doing a 360-degree spin into the side wall. Lori and Barbara cringed. Kevin drove tentatively until Barbara told him to speed it up. He pulled on the back lever and did a small spin. Mark and Robert did tricks together, laughing the whole time. Robert continued until he wiped out completely, and when he got up, he said that he loved it. Robert told Lori that she had to try it, but she reminded him that she was in a skirt.

Kevin said that it was not easy on the bumps as he made his way back to his seat. Robert said it felt like he was going a million miles an hour since it was low to the ground. Tyler grinned and said that was what inspired the name for Leaux Racing Trikes. Lori asked if he created the trikes himself, and Tyler told her that it started out as a science project in 6th grade. Unfortunately, the teacher was not such a fan of the idea because of it “wasn’t scientific enough.” Even so, Tyler ended up winning first place in the San Diego science fair, which was sufficient to prove her wrong.

Lori asked what happened after he won the award. Tyler instead showed her a picture of the first trike he’d made, which was created from the parts of other trikes. Barbara said the current design is an improvement. Robert asked how long it took to get to the most recent design, and Tyler told him about four years. Lori asked if he was in college, and Tyler said that he was currently a sophomore. Robert asked how he was planning on bringing it to market. Tyler stated that he attempted to crowdfund the Leaux Racing Trikes on Kickstarter. Robert asked what his target amount for Kickstarter was, and Tyler told him $15,000, but he raised $46,000. Tyler continued, saying that there was 130 order, which he fulfilled using his production facility.

Robert asked where their facility was, and Tyler told him that it was in Mexico. That facility he used was already producing BMX bikes. Tyler took a moment to brag, saying that he had three patents, and was an international businessman under the age of 18. Robert asked what he charges per unit, and what was the cost to produce them. Tyler said that each trike costs $350, and the cost to him was $170-180. Tyler stated that he doesn’t like mass-production. Each bike is handmade and then tested. Tyler said that he spends 8 hours a day in Mexico trialing a batch of 40 bikes. Lori asked him if he has an inspector, but Tyler said that he made sure all the parts were working, and the paint was coated correctly.

Mark asked Tyler how he was planning on selling 10,000 of the Leaux Racing Trikes. Tyler stated that he would get a larger facility where he could hire the labor necessary to handmade them in large quantities. Kevin said that there were plenty of facilities in Mexico and Asia where he could go, and say that he wanted 10,000 of them made by the workers. Lori said that he could also hire an inspector from a credible source so that he did not have to perform the inspections himself. The investigators would follow the protocol that he sets, and the facility would not be able to ship until the review is complete. Tyler insisted that he still wanted to test every single one of them, which was a bad move if he wanted to get an investment. It was hard to see how he was going to scale the business if he was insisting on micromanaging like that.

Barbara said that he wants to be personally responsible for every bike that goes out, but Lori told him that it would be almost impossible. Tyler agreed, and Mark told him that he would have to raise his price by a lot in order to account for his time. Robert wanted to know who his customers are, and Tyler told him that it was usually parents of 9-16-year-old children and the adult male. Mark said that Robert would be his perfect target customer. Barbara stated that he was a good kid who loves his product. However, it is very early in the game for Leaux Racing Trikes, and it is not investable yet. She went out. Kevin went next, saying that he was not sure how he would turn it into a huge business, and he wasn’t sure that Tyler was ready. He went out. Tyler thanked him.

Lori said that he was an excellent example of an entrepreneur, and stated that it was very admirable that he wanted to make sure that everything was perfect. On the other hand, she stated that he was only one man, and he can’t go to the factory and watch as each one was made. Lori continued, saying that he would need to license out the trikes if he wanted to scale the business. She stated that the company was not ready yet, and she went out. Robert told him that he was very impressive for inventing these trikes, and making them into a business. Robert said that he just wasn’t sure what the market was. The design was too hardcore for general distribution as a children’s tricycle, and it was too cheap for a niche market that loves speed and tricks.

Tyler said that he thinks it does fit for both the kid-friendly market, as well as the niche market. Robert said that Tyler was a brilliant guy who would invest something else, but he was not sure where the current invention fit in the grand scheme of things. He apologized and went out. Tyler thanked him. Mark asked Tyler to name his next product. Tyler looked confused. Mark said he was asking about because he did not see Leaux Racing Trikes selling two million units. He stated that there needs to be another product in the words to invest in Tyler’s company. Mark stated that he would make the investment to get somewhere better with a product that would sell. Tyler stated that he didn’t know about a new product, but he was planning extras and add-ones for the current model. Mark told him that doing that would increase his margins, but not get him to a multi-million dollar company.

Mark said that he would need to see a vision from Tyler that would take them into a much larger company, but he just was not seeing it now. He went out. He was the last one. Tyler said that he would end up selling a lot of the trikes through his website and other online sales, and he left the stage. In his exit interview, Tyler said that he was sad because they wouldn’t see his vision for the business. He didn’t think of the product as a toy, and he called their refusal to listen to him about the market “rude.” You could see his age showing at that moment. The Sharks had treated him very well, taking his age and experience into account.

Leaux Racing Trikes Now in 2018 – The After Shark Tank Update 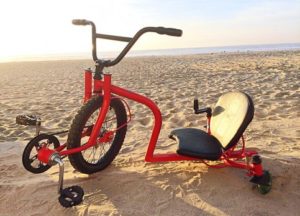 After appearing on Shark Tank, Tyler seems to have taken the Sharks advice to heart, and has a second version of his Leaux Racing Trike in the works. He told Heavy that he wanted to launch a Kickstarter campaign for the new product in June of 2016, but it looks like that has not happened yet. After the episode had aired, Tyler sold 400 units. According to the Leaux Racing Trikes Facebook page, it took them almost five months to be able to meet that demand and ship all of those orders out. That is the issue with the way that Tyler insists on inspecting each trike himself – it slows production, and there is no way to scale unless he gives that idea up.