The Floating Mug Company Update- What Happened After Shark Tank

Tigere “Tiggs” Chriga, from North Carolina, has come to the Shark Tank. Tiggs is the founder and owner of The Floating Mug Company, and he seeking $75,000 in exchange for 15% ownership in his business. The Floating Mug, quite simply, is the sexiest mug you might ever lay your eyes on. Tiggs immediately drops a compliment to Kevin, calling his mug the second sexiest thing. Tiggs is not a professional designer, and he has a “screeching” problem which led to the innovation of the Floating Mug Co.

Tiggs’ wife has a specific ‘screeching’ sound that he dreads, and Tiggs makes sure to let this primal scream out in the Shark Tank studio. Tiggs explains further, this is the specific screech that he hears whenever his wife finds a coffee cup stain on their furniture, and when Tiggs is distracted or busy, he doesn’t have the mental capacity to search for a coaster or a proper mug. As a result, coffee stains will typically form under the cup, and within minutes leave a stain on whatever. But there’s good news, Tiggs continues – he no longer has to hear the dreadful screeching from his wife. Together, the Floating Mug is a combination of a mug and coaster – the mug actually does not touch the ground. It is the perfect, elegant solution!

Tiggs then passes out samples of Floating Mugs to each Shark, specific for each Shark but in different shades of white. Kevin asks the immediate question, which caught my mind – does the bottom break over time? The entire cup is actually porcelain and quite sturdy – Tiggs has not heard of any Floating Mugs that have broken throughout normal use. Kevin then questions sales, which Tiggs has to give context before elaborating, which causes concern to rise in the Sharks, but Tiggs reveals that sales in the year of 2013 were $105,000. These were all sold to various customers, but mainly to a big distributor who sold the primary bulk of the units.

Kevin and Lori then question further details about the product – how much does it cost, where is it made, all the meat of the matter behind the actual product itself. Originally, Tiggs explains, the Floating Mug was made in the Czech Republic, but each mug cost $12 to create and ship over to the United States, which does not leave a noteworthy margin for profit. The Floating Mugs are sold for $29.99, and Tiggs realizes that the price is way too high for the product, but he is currently in the process of talking with a manager of a production company in the United States to bring production back home. This has lowered the price by a third, down to $4. 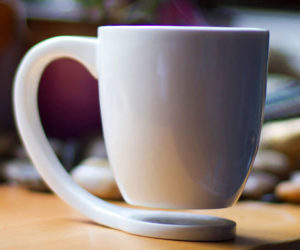 Robert then explains that he was in the glass business a long time ago, and the first thing he learned was that in order to bring the price point far down, there had to be a massive quantity ordered; Robert wants to know how many units Tiggs and the Floating Mug Co will have to purchase before the price point falls down to the acceptable $4 range. There would have to be 19,500 units purchased, Tiggs explains, and these mugs would then retail for $19.99 – rough math brings this out to be a $390,000 source of revenue.

Tiggs then explains that the Floating Mug is just a proof-of-concept for beverage products that have integrated coaster functionality, and Tiggs then brings out another prototype of a drinking glass. The benefit is, of coaster, an integrated, built-in coaster so any drips are caught in the reservoir. The reservoir is lipped so when the person drinks from the glass, the caught liquid won’t spill in the person, as well. Robert asks if there are patents, and Tiggs explains that for the Floating Mug, the patent has been issued, but for the glass, the patent is currently pending.

Kevin says his favorite drink is a lemonade and vodka in a tall glass, but the problem is that it sweats like crazy due to the amount of ice and the cool nature of the drink causing condensation. This leaves stains on Kevin’s desk, he explains – he would be willing to pay to solve that problem knowing with full certainty that he would have the same problem every day. While the Floating Mug might be a niche product, Tiggs explains that there is indeed proof-of-concept behind his product. However, Kevin explains that the Floating Mug will always be competing with a typical mug and a cheap coaster or napkin, and it’s not a task that Kevin believes he will make any money on the investment. Kevin explains that he searches for the path of least resistance as an investor, and The Floating Mug Co simply will not get him his profit in a timeframe that is appropriate for a man, like him, with so many opportunities. Kevin is the first Shark out. 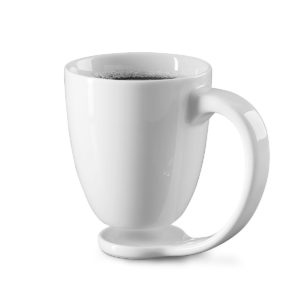 Robert voices his concerns for the Floating Mug, citing the market of people who want to pay a premium to avoid coffee stains as a very, very small market – few people are able to pay the increase in price to avoid something as minor as a coffee stain. Robert does agree with Kevin – the Floating Mug is not a wide, expected product to solve an issue, and thus is also out of the deal.

Mark speaks up next, saying that Tiggs has a “high motor” in him – the grind there is real, and he sees that Tiggs has indeed gone through the grind to get the product to sell on the market. The strategy is wrong, however – if Tiggs only sells 1,000 mugs, he will make the same profit on 5,000 mugs due to the nature of needing the distribution. Granted, Tiggs would make five times the amount of money, but at an extra cost – Mark believes that the Floating Mug should really be sold online, where Tiggs could “control his own destiny.” Mark is also out of the deal.

Barb and Lori are the two remaining Sharks, and Tiggs looks to Barb for guidance. However, Barb says that she imagines the Floating Mug is a one-time purchase, possibly as a gift – she cannot imagine someone purchasing a set of six at once. While she likes and appreciate the franticness behind Tiggs, she is also out of the deal.

Lori is the last Shark remaining, and she concedes that the Floating Mug should be available at a price point because not many people will purchase it for a price of even $19.99 – for her, the purchase would be guaranteed for $7.99 or $8.99, and even then, that could be considered a very high price for a simple coffee cup and coaster. The glass, however, is the one that Lori says she is interested in; while she doesn’t like the silicone band on the bottom of the glass, she suggests that making one whole integrated piece would really catch on. The product will still look sleek and beautiful, and the money can truly be found within the glass. However, Lori believes that Tiggs still has a lot of homework and research to do in order to refine the designs behind his products, and also exits the deal.

Tiggs, unfortunately, exits the Shark Tank with a broken heart. However, he is motivated to do better with the advice of the Sharks.

The Floating Mug Company Now in 2018 – After Shark Tank Update

The Floating Mug is doing just fine -a quick glance at Amazon reveals an extremely strong rating of 4.5 stars across a total of 506 customer reviews. While the Floating Mug Co is available on its own website, most of the sales seem to be driven through Amazon. The Floating Mug Co now has its own strong media presence, with a Facebook and Twitter that are still actively updating. The Floating Mug price was also brought down from the initial $29.99 to the more appropriate $16.99, and the mug seems to be selling quite well on Amazon.