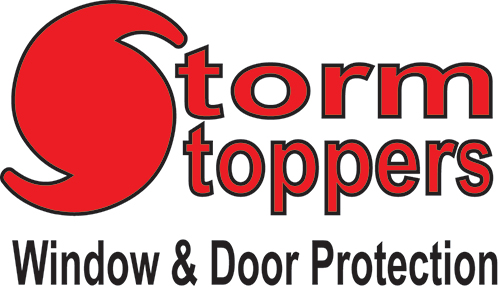 John DeSmith, from Orlando, Florida, has come to the Shark Tank. John is the creator of Storm Stoppers, and is seeking a $100,000 investment in exchange for 10% equity in his company. John wants to tell the Sharks about hurricanes; he compares them to in-laws. Just like in-laws, hurricanes give you little time to prepare, and can leave your house a complete mess. To give an example, standing behind John is a cutaway of a house, and an alarm flashes behind John as he presents. “Hurricane O’Leary is approaching!” the siren warns.

John calls on Barbara to help him protect the house from Hurricane O’Leary, aptly named after Kevin O’Leary, the Shark. As John and Barbara slide utility gloves on, this issue is faced by people in the southern United States every time there is a hurricane – everyone grabs plywood, which is heavy and takes two people, and slides the plywood over the window. There are some pegs for the plywood to be slid through, and John then attaches winged nuts which helps to keep the plywood sheet in place.

However, John then brings out the Storm Stoppers protector. Just like the plywood, simply line up the Storm 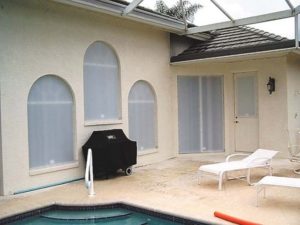 Stopper, clip in the fasteners, then take the mallet and tap it twice on each connection point. Storm Stoppers is a much easier to use version of version of the plywood method, but it does look fairly flimsy. How does it hold up in a hurricane simulation test, then? John then looks to the television behind him, which plays a video of a plywood protection method being easily penetrated by a 2×4 board. However, with Storm Stoppers, the 2×4 bounces right off the surface, and Storm Stoppers even protects the glass behind it.

Robert then asks how the Storm Stoppers panel can be taken off – there are handles on the outside of the Storm Stoppers panel, which is useful for moving it around as well as taking it off, but there is actually a second way. While everyone else bolts the product in front on, like the plywood method, but if there was a fire, for example, you could easily boot out the Storm Stoppers panel. John steps behind the cut-away of the house and kicks out the panel, climbing out through the window. 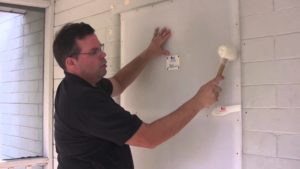 Storm Stoppers are sold as a kit with a panel and several fasteners included; Barb asks the price point for the panel that John used. The panel is around 12 square feet of material and comes with 16 fasteners, so the entire kit, which includes the mallet, would cost the customer around $85. Unfortunately, this isn’t cheap per window, and Kevin brings up the plywood. For a house to be protected with plywood, John estimates a cost of around $500, but with Storm Stoppers, it would probably be around $2,500 – this makes it a 500% increase on spending. However, the customers that purchase Storm Stoppers have personally told John that they would rather spend the $2,500 on Storm Stoppers panels and have the panels forever, instead of having to buy new plywood every storm season.

Kevin explains that he is trying to discover what it would take to make the Storm Stoppers panels the new standard, instead of plywood, which has been around for decades. Kevin then asks what the numbers are, since John gave it a valuation of a million dollars. John explains that this is his 10th business, and so far, they have done a little over $5.5 million in sales to more than 500,000 customers – in 2005 and 2006 alone, the year that Hurricane Katrina and numerous other hurricanes hit the southern part of the United States – Storm Stoppers grossed more than $1.6 million. Within the past 12 months, Storm Stoppers has brought in $200,000.

Mark points out the drop off in sales, but John compares the sales of the product to the economy and the weather – the sales of Storm Stoppers are strongly dependent on a strong economy where people will invest money once in a larger sum rather than in a smaller sum continuously, as well as the imminence of storms coming in from the Atlantic Ocean and Gulf of Mexico. There needs to be rain to sell an umbrella, John explains. However, in a bad year with fewer hurricanes, Robert says he can imagine sales falling down to around $800,000 to a million, but to fall down to $200,000 is such a huge decrease from where Storm Stoppers once was.

Kevin says that the one thing that he hates about Storm Stoppers is that there is nothing proprietary about it – if Kevin wanted to, he could easily start a similar company manufacturing panels, buy the 3M product that John is using, and start his own while maintaining the entirety of the equity. James admits that there is nothing proprietary, but however, he likes Coca-Cola; he doesn’t buy Coca-Cola because there is a patent, but rather, he likes the taste and the way it makes him feel, which prompts Robert to question if James still fully believes in his business. James reaffirms that he will always stick through Storm Stoppers, since the customers believe in it. 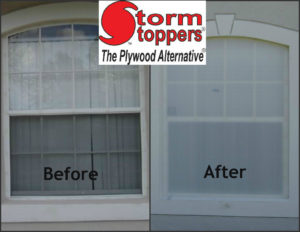 Unfortunately, Robert admits that he sees so many challenges in getting Storm Stoppers to be successful, and exits the deal first. James explains that the one thing that the customers have continually mentioned is the safety of the Storm Stoppers products, but Kevin says that there is nothing that could change his mind – James then quips that Kevin isn’t a mind reader, which causes all of the Sharks to become much more interested in what he has to say, since he just lost Kevin by insulting him and refusing to listen. Kevin admits that the sales are horrific, and while there is a really interesting technology behind the product that works, it simply isn’t a good investment. Kevin is also out of the deal.

While Barb admires the product and thinks it’s a good buy for any homeowner, the idea that in an emergency the Storm Stopper is easily removeable is very attractive. However, like the sudden hurricanes, James must have a massive amount of Storm Stoppers on hand for when the consumers need to immediately purchase them. There needs to be a massive stock in inventory, and James also has to hope for a hurricane soon – this ties up the cash for a long, long time, and James won’t even know when he is going to sell off his inventory. Barb is also out of the deal.

Mark calls James an expert in hurricane safety and protection, but comments that his interpersonal skills and sales skills are awful. He challenged Kevin when the business was on the line, and the “mind reader” comment really turned Mark off from the idea of investing in the business, so Mark can only imagine that James would get flustered in a situation where he is dealing with a customer. Mark just does not trust James, and is the fourth Shark out of the deal.

Lori is the final remaining Shark, and starts by saying that the Storm Stopper is a very smart product, but her biggest concern is with how the sales just completely dropped off. Lori is also out of the deal, leaving James without an investment in the Storm Stoppers series of products.

Storm Stoppers Now in 2018 – The After Shark Tank Update