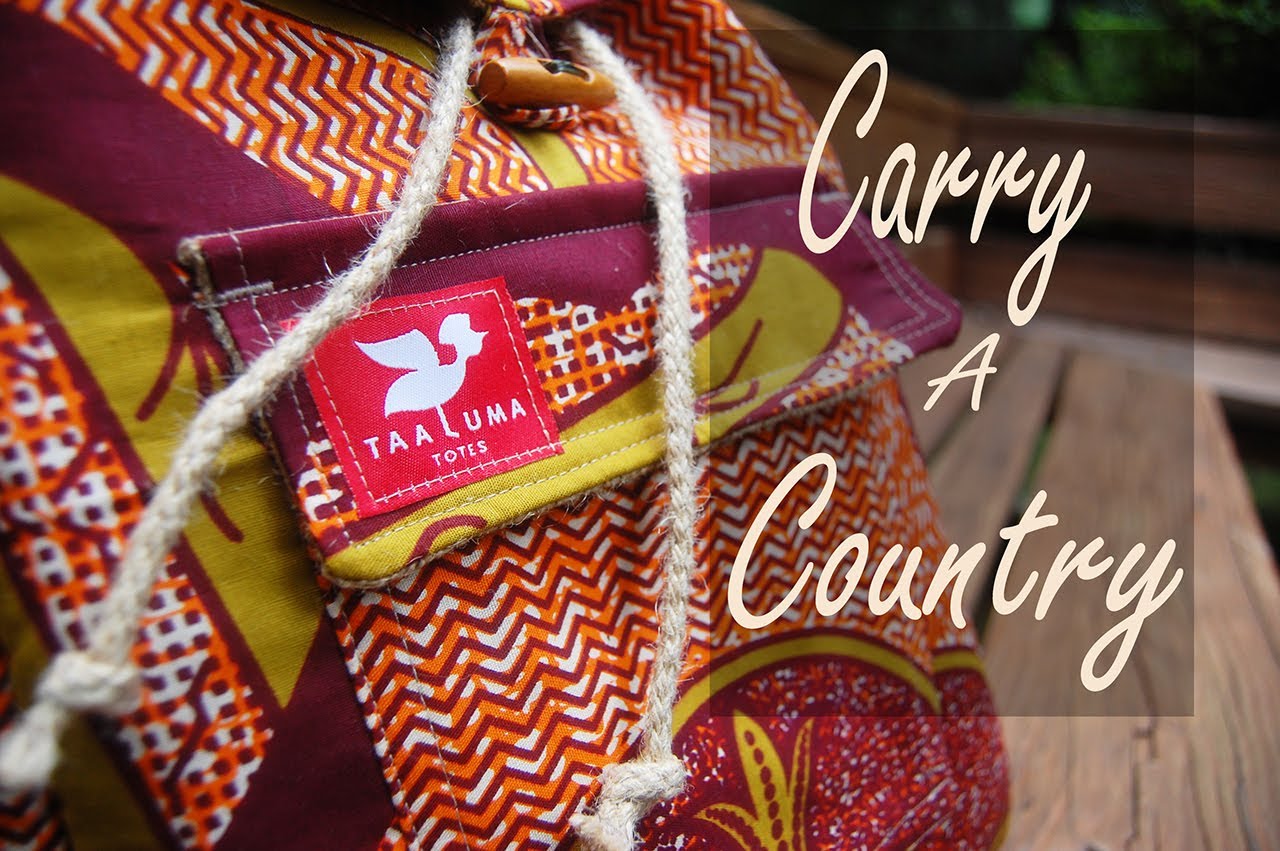 Jack and Ali are the cofounders of Taaluma Totes, and have come to the Shark Tank to seek an investment of $110,000 in exchange for 15% in their company. Ali starts by saying that it’s time to kick the generic, old, boring backpacks to the curve – Jack and Ali went to Rwanda during a summer break from college to volunteer, and they couldn’t take their eyes off all the variety of different, vibrant fabrics. So, they picked out a fabric and found a seamstress to then make Ali her own skirt. Since Jack was jealous of the fabric and the fact that he probably couldn’t wear a skirt as a male, Jack came up with his own idea. He asked the same seamstress to embroider his backpack with the local fabric, and Taaluma Totes was created shortly after.

Taaluma Totes are vibrant backpacks from various countries, and each one is made of traditional fabric from the native country. The money spent on that country’s backpack is also embroidered with the native country on the back of the backpack, so you always carry around the country when you carry the backpack. While they started the business from their college apartment, and college graduation approaching quickly, they eventually traded their calculators for totes and made the night-and-weekend project their full time. 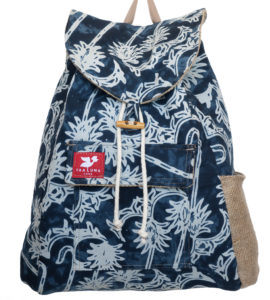 Ali immediately passes out samples while Robert asks for details about the students’ lives. Both Jack and Ali attended Virginia Tech college, studying for engineering. Robert receives an Indonesia tote bag, Lori receives a Mali tote, Kevin receives a Green Indian tote, Daymond receives the Ghana tote, and Mark receives the Ivory Coast tote. Each backpack actually has a story attached to it – the one backpack Lori received funded a micro-loan for the craftsmen that made it, which allowed the craftsmen to purchase more supplies to make more backpacks with. Each backpack comes with a unique story attached to it.

Lori asks about the sales of Taaluma Totes, which Jack reveals to come out to $60,000 over the past 5 months, which in turn has funded $6,000 in micro-loans to craftsmen to make more backpacks. Robert then asks how the two went to Rwanda, and why they were even allowed to – Ali’s dad works in the state department, so she was able to move around the world her whole life. Daymond then questions if the products are made in the territories, or are patterns to represent those territories. All of the fabrics come from where they are made to Richmond, Virginia, where they are eventually assembled.

Daymond questions why backpacks aren’t made overseas, which helps to create jobs, but Jack considered that. However, the facility in Richmond specializes in hiring adults that have disabilities, which is helping to create local jobs. Each bag is sold for $65, and costs around $27 to make. Daymond admits that he would pay more for the bag, but Ali claims that their target audience is college kids and high school kids on a budget. Lori agrees with this strategy since they are making the bags more affordable to many, as opposed to just a few. 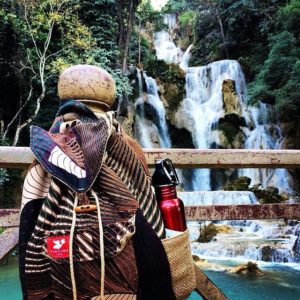 Robert asks about the expansion plan for Taaluma Totes, and Ali explains that with the money they should receive from the Shark Tank, they want to expand the campus ambassador program, which is currently in a “beta testing” phase. Taaluma Totes is finding 2 students on each campus to spread the word about Taaluma Totes, and they aren’t paid for their time and effort in helping to advertise Taaluma Totes. Kevin dryly remarks, when the two of them get older, they’ll turn into capitalists.

Mark then questions how the micro-loans are handled. The loans aren’t actually official loans, but are small loans given to an entrepreneur in the developing world. The loan is paid back within 12 months, and they will use that money to buy money for the next order of fabrics from the country, which will help to close the loop and leave the entrepreneur open should they want to keep doing business. Robert is impressed since they took an idea and ran with it, and he loves the product. However, the Sharks are primarily here to take businesses to the next level when those businesses are on the threshold of blowing up and becoming something huge. Ali explains, the things that are most holding Taaluma Totes back is the manufacturing process, since they actually ran out of inventory several months back which crippled their income.

However, Robert explains that these businesses have to be at a certain level in order to springboard, and while Taaluma Totes seems to be figuring it out, especially with the college ambassador program, it is just far too early for Robert to invest. Robert is out of the deal first. While Jack and Ali might be fast learners, there just is no potential for an investor to get their money back without having to put a load of effort into the business.

Mark says that the two of them should be proud, but ultimately, Taaluma Totes is a product still and not a company. While Jack and Ali have metaphorically fallen down and gotten back up over some trip-ups in the lifespan of Taaluma Totes, Mark feels that they haven’t fallen down enough yet. Mark is out of the deal next.

When Lori first started her business, she only had one product idea, which is the same for Taaluma Totes. She had to figure out everything on her own, but as the business grew, she understood how to make more and more products. While she believes in Jack and Ali and their ability to grow the business, it is just too early for her to invest in the company. Lori is out of the deal, as well. 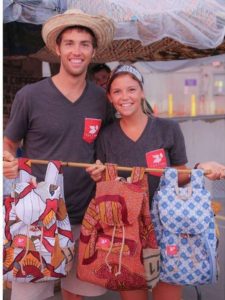 Daymond commends Jack and Ali on their efforts, since it seems like too many people are just trying to make money and develop an application since that’s the new gold rush. Jack and Ali are actually out making change in the world, instead of getting rich doing nothing. With that said, Daymond believes that Jack and Ali weren’t properly thinking about the margin of profit for their product, which means sustaining a profit will be much more difficult than if they had otherwise had the foresight to increase their margin. Daymond explains, first you have to make it, then you have to master it, and after that, you matter in the market. Daymond is the fourth Shark out.

Kevin is the final Shark remaining, and he starts by saying that he had a little connection with Ali when she explained that her father worked for the state department which meant that she had to travel all over the world. That was also Kevin’s story, who lived all over the world – every two years they moved. The problem with the brand is that Taaluma Totes is not worth $700,000, or anywhere near it – it’s still way too early, and Kevin thinks that the company isn’t worth $110,000 yet. Jack explains that a lot of the valuation is going to their experience, since they are figuring out how to build a crowd around a mission, rather than a mission around a crowd and just selling a product to a customer. The reality is that when a business that attends a meeting with a disciplined financial investor, like Kevin, that person is seeking for a way to make their cash back within the next 36 months with little effort. That is how to determine if the company is a hobby or a business, and unfortunately, Jack and Ali are too embryonic for Kevin’s interest right now.

Kevin is the last Shark out of the deal, leaving Jack and Ali without an investment in Taaluma Totes.

Taaluma Totes Now in 2018 – The After Shark Tank Update

Taaluma Totes is doing quite well after the appearance on Shark Tank, and seem to be maintaining a strong social media presence – just 20 hours ago, Taaluma Totes reshared an image on Twitter of a consumer wearing a Taaluma Totes bag to Machu Picchu, located in Peru. Despite the lack of investment, there is no lack of interest in Taaluma Totes, and thanks to the use of social media, Taaluma Totes appears to be quite fond of retweeting images of Taaluma bags in use all over the world. The exoticness, and humanitarian side of Taaluma, appears to be creating a strong brand. The website now even includes information that 20% of the profits will be returned to the country where your tote bag is made.