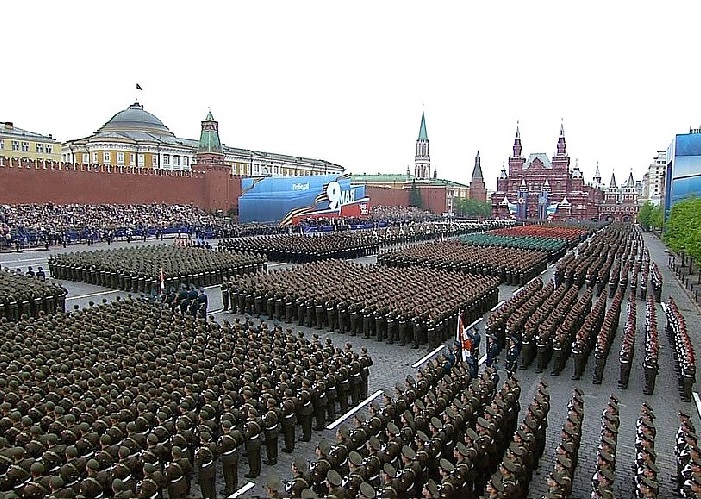 The development of the human race has gone hand-in-hand with warfare since almost the very beginning of our history. There’s no doubt that back in the far distant mists of time Ogg thumped Ugg over the back of the head with a large bone because he wanted Ogg’s more spacious cave with running water, but organized warfare amongst whole groups of people didn’t begin until humankind had discovered farming, and then irrigation, and as a result we swarmed all over the planet and resources began to be sorely contested.

With the growth in our species population, we began to develop strategies and tactics, to better defend our territories, and take that which we needed, by force if necessary. With the incredible surge in population that the World has experienced since the industrial revolution, the need for a forceful option for countries that defend democracy and freedom has never been more vital to a nations survival. These days the World faces an uncertain future with all the nuclear war talk taking place between the United States and North Korean leader Kim Jong-Un. When it comes down to it sometimes only a well-maintained army prevents total chaos from breaking out and spreading, but which countries have the biggest armies today in 2017? Read on to find out who packs the biggest military punch of all. 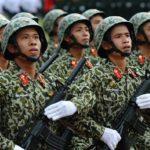 Created in September 1944 as a brigade to fight against French and Japanese occupation of Vietnam, the People’s Army of Vietnam (PAVN) was originally comprised of just 34 troops who had a few dilapidated rifles amongst them. Their main objective was completed in 1954 when they faced off against France at the Battle of Dien Bien Phu. Their success in this battle led to the end of France’s rule in the country after over 83 years. During the Vietnam war the army was known as the North Vietnamese Army (NVA) and fought alongside the Viet Cong against American troops. Since the end of the Vietnam war the army has been bolstered by a two-year mandatory conscription order amongst Vietnamese males aged 18 to 25, although females are allowed to volunteer, and today in 2016 the army has almost half a million standing troops, although three million former conscripts are held in reserve in the event of an emergency. 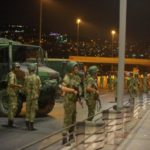 The failed Turkish coup of 2016, was an attempt by rogue elements of Turkish Land Forces to seize power from President Erdogan by force. Despite an unsettling few hours when civilians were fired upon by troops on the iconic Bosphorus Bridge in Istanbul, the president eventually managed to communicate with his supporters, who flooded the streets and stopped the uprising with sheer strength of numbers. Although in the new millennium the Turkish army declined in numbers to as little as 300,000 in 2012, the recent destabilization of Syria, which has had a knock-on effect on neighboring Turkey, and the aggressive posturing of Russia, has seen the armies numbers swell again to over half a million troops. With tension between Turkey and the United States over the alleged mastermind of the coup, Fethullah Gulen, a cleric currently based in Pennsylvania, the future of Turkey’s inclusion in the NATO peace pact is in some doubt. 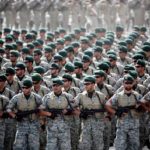 The forerunner of todays modern Iranian army was founded in ancient Persia in 1,000 BC, and its current form, partly as defenders of Iran’s strict Islamic code, began after the Shah of Iran was deposed in the Islamic revolution of 1979. Like all good Musketeers, the armies motto is ‘All for one, One for all, All for Iran’ and the over half a million soldiers are responsible for not only border control, but maintaining order internally too. The ‘Army of the Guardians of the Islamic revolution’, or the ‘Revolutionary Guard’ as they are also known, protect the countries Islamic system from foreign interference and deviant movements, according to the Iranian constitution, although in practice this appears to involve telling women to cover their hair up and hanging homosexuals and potential dissidents arbitrarily. 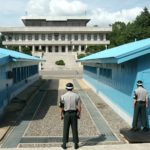 When you’ve got a psychopath living next door, you buy yourself a large dog, perhaps an alligator if local by-laws allow it, but when you’re South Korea, living next door to the bizarre, outdated, and thoroughly aggressive secretive state of North Korea, and its unpredictable dictator Kim Jong-un, you need more than just aggressive animals. Affluent and Westernized South Korea lives in a constant state of tension due to the historical legacy of the Korean war, no more so than at the demilitarized zone (DMZ) between the two countries, and 3 million reservists are ready to join the 630,000 standing troops in the sudden event of war breaking out with the North. The Republic of Korea (ROK) armed forces have an annual budget of $38 billion dollars and are equipped with many modern and sophisticated American and European weapon systems, which the South Koreans believe are more than capable of defending the country against the North at the current time. 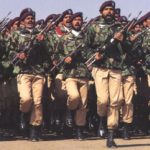 The Pakistan Army came into existence in 1947 after the country became independent from the United Kingdom. Since its formation Pakistan has been involved in four wars with neighboring India and several armed responses to border incursions from Afghanistan. Tensions between Pakistan and India remain high to this day, largely due to the disputed territory of Kashmir, although the two nations, both nuclear armed, have so far avoided escalating their disagreements into an all out war. The Pakistan army has been hugely influential in Pakistani culture and history, often being used as an authority in rural areas where there is not a stable rule of law. The army has supported the war on terror and UN peacekeeping missions in recent years, and has also fought off a Taliban encroachment into the Swat valley since 2010, mainly to great effect. Now in 2018 Pakistan has more soldiers currently deployed on UN peacekeeping missions than any other country.

After the collapse of the Soviet Union, Russian leaders attempted to organize a joint military force to operate in former Soviet states, however when former members of the soviet block, such as Ukraine, insisted on forming their own armies, the Russians were forced to re-evaluate their plans. The mass withdrawal of Soviet forces from Germany, Poland and Czechoslovakia also caused huge logistical problems at the time, with returning equipment often being dumped in empty fields as there was no-where to deploy it. The Russian army was disorganized and in poor shape in November 1991 when the Chechen people declared themselves independent, the first Chechen War ensued and the Russians, although vastly superior in both numbers and equipment, found themselves fighting a long battle with poor support, often being left without even basic rations in the midst of the battlefield. A second Chechen War broke out in 1999 and the Russian army re-organized far more efficiently, and this time they stopped all large-scale opposition with ease.

The organization of the Korean Peoples Army (KPA) has undergone many changes since Kim Jong-un was declared Supreme Leader following the death of his father in December 2011. Many new appointments to the military leadership were made, and many generals, considered more loyal to the former regime, disappeared from public view, which in North Korea generally means a morbid fate, either execution or imprisonment in one of the countries notorious concentration camps. The exact nature of the current leadership structure of the army is virtually unknown, such is the secretive nature of Jong-un’s dictatorship, but it is known that the standing army of almost 1.2 million soldiers would be increased to approximately 7 million people in the event of war with the South, or almost one quarter of the countries population. The fanatical nature of the states brain-washing of the entire populace could eventually see the entire country rise up in support of their ‘glorious leader’ and North Korea remains one of the biggest threats to peace in the region. In September 2016 South Korea announced it had ‘concrete’ plans to assassinate Kim, should he ever actually carry out his regular threats to start another Korean war. 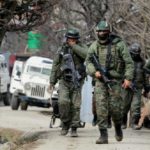 The first Indian army was founded in 1833 in British-controlled India. The force gained much valuable experience fighting in the constant British colonial wars of that century, and have retained much of their modern organizational structure from their British roots. In recent years the disputed region of Kashmir has caused frequent tensions with Pakistan, with eighteen Indian troops being killed in September 2016 in a terrorist attack in Indian governed Kashmir. The Indian government blame Pakistan for the attack and launched a retaliatory attack a few days later, reportedly killing as many as 200 militants in Pakistan controlled Kashmir. The recent upsurge in violence in the region marks a low point in Indian-Pakistan relations since they last came to blows over the disputed territory in 1999. 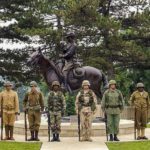 Yes, somewhat surprisingly The United States doesn’t actually have the largest standing army in the World today, but no fear, because the World’s only real superpower can rest assured that the American army is by far the most powerful. The annual military budget of $610 billion, not counting the undisclosed billions spent on ‘black’ projects, makes all other nations military spending seem almost inconsequential in comparison. China spends the next largest amount with an annual budget of $145 billion, and the US military budget is more than all of the other countries on the list combined. China will be making an appearance in the list next, but the American level of military technology is considered to be about twenty years ahead of the Chinese, and that advantage, combined with the well-funded research that pushes weapons development always onward, is likely to leave America with the most powerful military force for some considerable time. 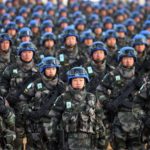 With almost 1.4 billion people, China has almost 19% of the Worlds population living within its borders, and with such a huge number of people, the communist superstate can easily afford a standing army of over 2.3 million, which accounts for less than 0.2% of its total population. Chinese ground forces were considerably greater in number during the cold war, but have been reduced since then to allow for the countries new thrust towards economic development. Military drafts are compulsory in China but the law has never needed to be enforced, as the army receives more volunteer applications to join the force annually than it ever requires, instead a system similar to America’s Selective Service System is employed. The modern Chinese army maintains law and order in rural areas of the huge land mass, as well as operating in occupied Nepal. In recent years China has deployed ground troops in support of various United Nations peacekeeping missions, most notably in African countries besieged by violence, such as Sudan, Ivory Coast and Haiti.