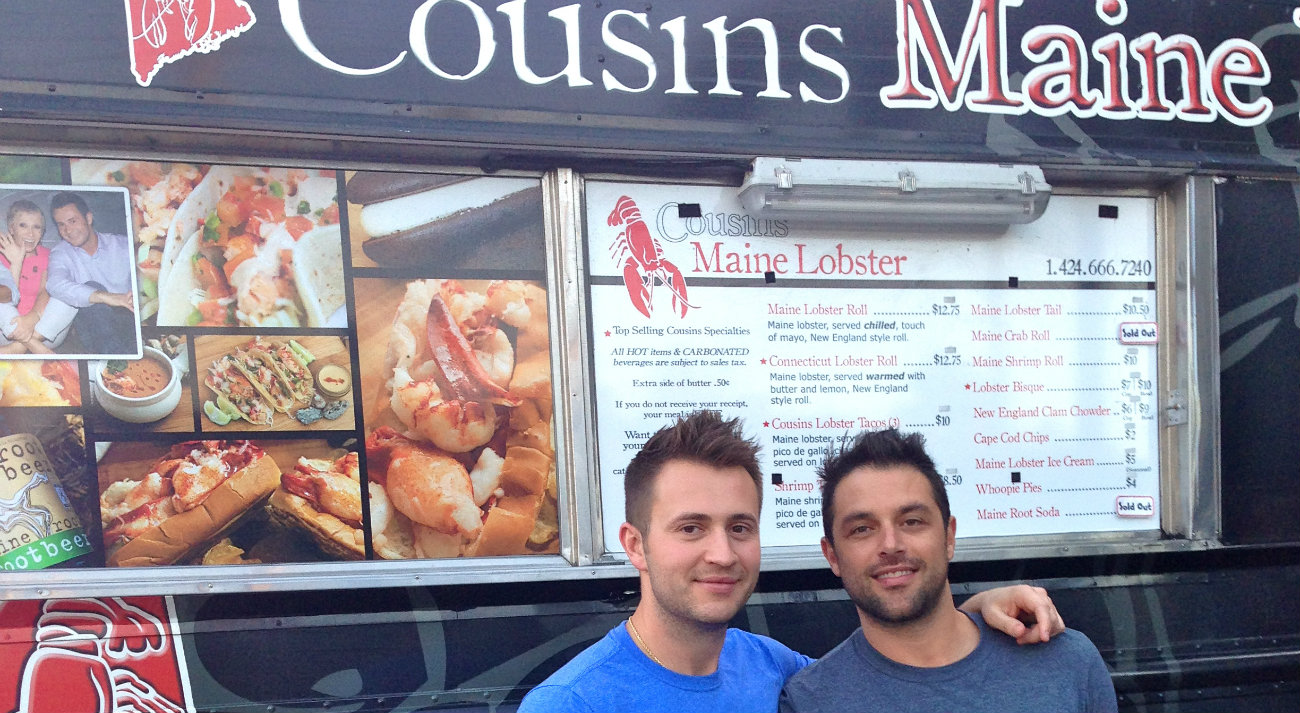 The introduction video started off with Jim Tselkis and Sabin Lomac introducing themselves in front of lobster cages, and a Maine harbor. They said that they were cousins from Maine. Jim said that the best part about growing up in Maine was definitely the lobster. He insisted that Maine lobster was the best lobster meat you’ll ever have. He said that they were currently living in Los Angeles. The video flashed to food truck with Cousin’s Maine Lobster emblazoned on the top. Jim peeked out from inside, and asked who wanted some fresh Maine lobster.

The narrator said that there is a food truck phenomenon now in Los Angeles. He said that they wanted to combine two of the best Industries in their area. The video pictured of someone tossing hot lobster meat in a pan. Sabin said that their business was booming, but they were unable to serve all the people. They were looking to get another food truck, but they wouldn’t be able to do it on their own. Sabin said that it was very important to get the investment from the Sharks. The video ended with Sabin on Jim’s shoulders. 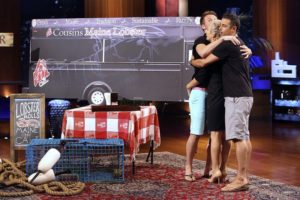 Robert got excited and asked if they could have a sample. As Jim and Sabin handed out samples, Barbara wants to know how they transported the lobster from Maine to California. Robert told her to stop and said that he wanted to try the lobster first before asking any questions. Barbera informed him that she was fully capable of eating and listening at the same time. Sabin said that Cousin’s Maine Lobster gets everything fresh, from the lobster to the bread, from Maine to Los Angeles. He continued, telling the Sharks that they were two different kinds of rules. One is the signature Maine lobster roll, which is on a split top buns, with fresh lobster meat, a little mayonnaise.  He said that there’s also the Connecticut roll, which had a little lemon on top. Robert stated that he greatly enjoyed his sample. Jim said that they tasted so delicious because it was fresh from Maine. He said that that was what they grew up with, and they had access to it all the time. They wanted to bring it to the rest of the country. Robert asks them if their supplier was also a cousin. Jim let him know that the lobster industry is not something you can just call into to get supplies, you had to have connections. Jim said that their suppliers weren’t family, but they were still able to get great pricing and relationships because they grew up in the area.

Kevin told him to be careful with that since there were several suppliers of lobster meat in Maine. They weren’t the only ones who could get it. Sabin agreed that there were multiple providers, but it depends on the pricing that was getting to ship it wholesale cross country. Kevin said that he was concerned with their valuation. He stated that he understood that they wanted to buy another truck with his $55,000, but they were valuing the business at over a million dollars. Mark let him know he hadn’t heard a word about what Cousin’s Maine Lobster sales look like. Daymond wants to know how many trucks that they had. David told them that they only had one truck. That one truck had been open for two months and had generated $150,000 and sales. Robert seemed impressed. Mark wants to know where they parked the Cousin’s Maine Lobster truck and Sabin told him all over Los Angeles.

Robert told them he wasn’t buying their story, but Mark insisted that he was. Mark said he wanted to hear more about the economics of the truck, and the seasonality of the business. Jim said that typically in the lobster business, prices would rise with the seasons, but they were locked into their prices. Robert wanted to know what the average price was. Sabin said that they price the traditional lobster roll at $13 each. Want to know what the cost was $5.85. Mark directed their attention back to him, telling them to answer a question from someone who might invest. He wanted to know again what the economics of the truck were. David said that they bought the truck for $65,000, and paid $20,000 per month for their employees and the overhead. He stated that the cost would go down because they’ve hired a general manager. Barbara seemed surprised that they didn’t manage their own small business. Sabin Told her that that was because they didn’t know a lot about managing a food truck.

Barbara asks them how they got into the business and went from Maine to Los Angeles. Sabin told her that he wanted to get into acting. Daymond said that he was still a great actor because he was acting like a greedy Pig asking for $55,000 in exchange for 5%. They insisted that they were not trying to be greedy. Daymond and asked what was in it for the Sharks, if they made an investment. Jim told him to earn money and become a part of the Cousin’s Maine Lobster family. Mark let them know that he thought the other Sharks were just talking nonsense. Mark went out, saying that it was because the entrepreneurs decided to pay attention to the questions that they were asked by all the other Sharks, instead of paying attention to someone who might invest. Barbara told him that this was not fair. She said he was starting to act like Daymond, a whining baby. The Sharks start fighting among themselves, and Robert asks Barbara if she was going to write a check. She said that she was, and told him to pipe down.

Daymond told her that just because she was an old crab doesn’t mean that she should get into the lobster business. Barbara asked them if they were other competitors. David said that there were two other competitors to their knowledge. Robert said, that he liked the idea, but needed help getting to the million dollar valuation. He said that it was too high. Kevin told them that it was outrageous to ask for that much money. He went out. Jim let Robert know that they had to turn down catering events because they didn’t have time to fulfill the orders. Daymond told them that he was a commercial fisherman for a year. He said that he worked at Red Lobster for ages, and understood a bit of the market. He told them that they were making their main selling point the fact that they have a contact in Maine. Daymond said that their valuation was crazy, and told them to make him their best offer. Jim stated that he would feel comfortable giving 7% or 8%. The rest of the Sharks laughed. Robert said that they were good actors, that they were able to say that with a straight face. Daymond went out.

Robert said that he liked the two of them because he thought that they were Hustlers. He told them that he liked to invest in businesses whose entrepreneurs who are willing to get up every day and do it need to get done. They insisted that that is what they were doing. Robert made an offer for the $50,000 in exchange for 25%. They said that they were not willing to entertain that offer. Barbara said that she would give them $55,000 in exchange for 17% of Cousins Maine Lobster. She said that 17 was her Lucky number. Robert insisted that he was excellent at building up businesses quickly, and wanted to put more trucks out on the street. Robert offered $100,000 in exchange for the 25%. Barbara asked if they needed that much money.

Sabin sighed and considered the offers on the table. Kevin outlined the two offers and ask them what they were planning on doing. Jim has one more question for both Robert and Barbara. He wanted to know what their thoughts were on the strategies that they would take if they invested in the business. Barbara said that that was a great question, and told the pair that she was an excellent marketer. She said that she is never wrong about, and it was in Her Bones. She stated that she thought that their truck was terrible, and told them not to take offense. She wanted their faces on the truck as the cousins and thought it should be cousins fresh main lobster. Daymond’s said that he agreed with Barbara, and said that she was a genius marketer. Robert stated that he didn’t feel the need to prove himself to them. He was insulted by the question, and he Pulled his offer off of the table.

Sabin asked if Barbara would consider 12% for Cousin’s Maine Lobster, but she shook her head no. Mark wanted to know why they were holding on so tightly to the equity. They said that the business was their baby. Mark stated that 80 percent of a watermelon is better than 100% of the grape. Barbera said that she would be willing to meet them halfway, and offer them $55,000 in exchange for 15%. They accepted the offer. 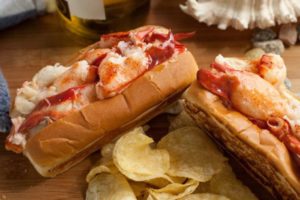 Since getting a deal with Barbara on Shark Tank, Cousin’s Maine Lobster has expanded their trucks to Nashville, Tennesee, and San Antonio Texas. They have appeared on numerous TV shows such as The Today Show, The Chew, and Master Chef. Cousin’s Maine Lobster now has over 20 trucks cross country, as well as a brick and mortar restaurant located in West Hollywood. They even sell their lobster meals online, and through QVC. If you can’t visit their locations, you can shop for their delicious lobster on their website.