Before appearing on Shark Tank, the outgoing and unique Donna McCue developed her fudge from her grandmother’s secret recipe. This recipe uses goat’s milk, which makes it unique. She made it as gifts for family and friends, and it didn’t take long before they suggested that she start selling the fudge. Donna took up the challenge, and Fat Ass Fudge was born. She began to sell the fudge at local farmer’s markets in her hometown of Southampton. She even met Hugh Jackman at one of these markets, and he helped her set up her tent.  Would the Sharks fall in love with the delicious candy and the funny name? Let’s take a look. 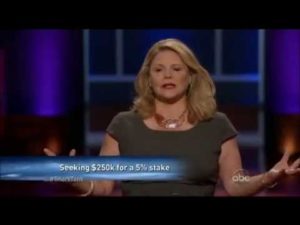 Donna McCue walked out into the Shark Tank, and onto the stage.  She greeted the Sharks and introduced herself as the president and founder of Fat Ass Fudge.  Mark laughed. Donna requested $250,000 in exchange for 5% of the company.  Donna explained that  Fat Ass Fudge is her grandmother’s recipe that she adapted. She said that it was made with goat’s milk, and therefore was lactose and gluten free.  Donna did a little shimmy and stated that it wasn’t glutton free. She stated that chocolate made people happy.  Donna offered the Shark samples before she took questions about the business. She carried a tray with several different flavors of fudge comma and told Robert to take his time deciding which one he wanted. As Donna handed a sample plate to Barbara, Robert asked which one was the best.  Donna said that she liked the vanilla, but that was her personal preference.

Barbara stated that the fudge was deliciously smooth. Donna did a little dance on stage.  She indicated that it was good because years ago she wanted to be in Show Business. She said that every time she wasn’t able to get a part, she would beat the chocolate instead of beating up herself. She stated that she got excellent at making chocolate with years of not getting things that she wanted. She said that she made everyone goody bags at her 60th birthday celebration since the Fat Ass Fudge was a special treat. Donna said that when her older brother tried the fudge, he told her that she should sell it. She told the Sharks she got the inspiration for the name from the nickname that her brother used to call her -fat ass. She said that she knew that her fudge would be a hit, and then she told Mark she had a dream about him last night.  She started cackling. Kevin told her but she was scaring him.

Kevin asked her about her numbers. Donna said that she had to deal with Whole Foods. Robert wanted to know if she had sales in the last 12 months, and she screeched that she did. The Sharks all asked her in unison what the sales were. Donna told them that she had done $60,000 in sales. Robert said that he was not as excited as she was. Donna looked confused and asked them if that wasn’t good.  Mark told her that it wasn’t, and said that she shouldn’t give whatever she is on to Kevin. Donna stated that she was just one person, but Robert still insisted that the cells were low. She stated that the name alone was worth a million. Donna continued, saying that she had started at farmers markets.  She said that she quickly gets wiped out of product at these events, and the customers are drawn by the name. She insisted that the taste keeps people coming back.  Donna said that the brand had endless possibilities. Daymond did not look convinced.

Barbara told Donna that she was a great actress. She asked Donna if she was going to Farmer’s Market to Farmers Market to sell the product herself.  Donna said that she was and that Whole Foods was starting to put in orders for the product. Kevin wants to know how many Whole Foods stores she was in. Donna told him that she was in two stores.  Barbara asked if she had purchase orders, and Donna confirmed that she did.  Kevin important aspect of the business was the numbers, and Donna said that she agreed. He started to sound like he was about to go out, and Donna asked him if he was going to negotiate. Kevin said that he would start the negotiations all I ask by giving her the $250,000 in exchange for 1000 percent of Fat Ass Fudge. Donna asked if that  Was too much, and Kevin told her that that was exactly his point.  The Sharks continued to laugh at her.

Kevin said that he thought that Donna was a sweetheart. He told her that he loved her, and her fudge.  He suggested Barbara as down as business partner, saying that Barbara was just as crazy as Donna. Barbara asked if Donna wanted some honest feedback. Donna said that she did.  Barbra told Donna that He saw her as a wildly enthusiastic lady who likes to make fudge. Barbera said that she didn’t think it has anything to do with money. Barbara said that she thought I only wanted to get out, and meet people, and get attention and enthusiasm for her product. She said that she didn’t think there’s any room in the deal for any partnership. She asked her why she didn’t just keep doing what she was already doing. Barbera went out.

Daymond told Donna that the fudge was great, and he could watch her all day.  He told her that he really enjoyed her energy, but he did not see Fat Ass Fudge as a business. Daymond went out. Robert didn’t even try to explain himself. He just went out. Mark was the only one left. He told Donna but he didn’t think that she needed him. He said that she would be just fine on her own. Mark went out.  Donna walked off the stage. As she left, Robert implied that he thought she was making weed brownies instead of fudge.

Fat Ass Fudge Now in 2018 – The After Shark Tank Update 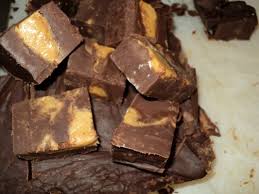 Linda did not secure a deal with a Shark, but that does not make Fat Ass Fudge a Shark Tank failure. A year after her appearance on Shark Tank, Donna sold Fat Ass Fudge for a little bit under $1 million to Linda Johnson. Linda is the successful founder of Chocology Unlimited, and she is selling Fat Ass Fudge on her website for an impressive $30 a pound.