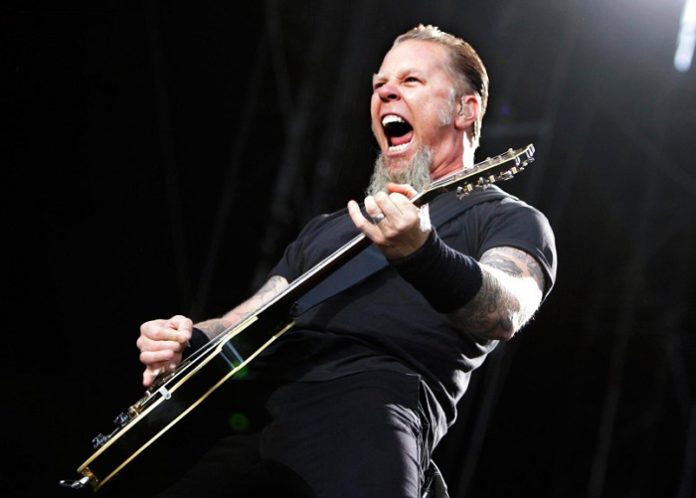 Thrash Metal emerged in the early 1980’s as a combination of Hardcore punk and the new wave of British heavy metal. Influenced by bands such as Iron Maiden and Def Leppard, the founders of the genre are generally considered to be four groups, Anthrax, Megadeth, Slayer, and Metallica. Although all of them have enjoyed considerable success and popularity throughout their active years, only one of them has become so hugely successful that it has transcended its niche roots and crossed over into mainstream popularity. Metallica, with James Hetfield at the helm stand alone as the real kings of thrash metal due to their longevity and phenomenal appeal, but what’s James Hetfield doing now in 2018? Read on to find out.

James Alan Hetfield was born in Downey, California on August 3rd 1963. His father Virgil was a truck driver, and his mom Cynthia was a light opera singer. Both Virgil and Cynthia were strict Christian Scientists, and due to their beliefs they refused to take medications or undergo any form of medical treatment, instead believing that God would heal them if they were to fall ill. They stuck to their beliefs strictly even when Cynthia was diagnosed with cancer in 1978, prayers were made for her survival and recovery, but unfortunately to no effect, Cynthia died in 1979, when James was just 16.

Hetfield had by that time already become interested in music, he had taken piano lessons for a while, and then learned drums for a few years, but from the age of about fourteen James fell in love with the guitar. He played with a few bands but eventually joined ‘Leather Charm’, the group formed by his close school-friend and house mate Ron McGovney in 1981. Leather Charm were a garage band that played British metal covers, mainly by groups such as Iron Maiden and Diamond Head. James was rhythm guitarist and lead vocalist for the group, which produced a heavier and faster version of metal than normal, but unfortunately before they had rehearsed enough to gel as a band, the drummer abruptly left the group, and Leather Charm disbanded.

At about that time James Hetfield saw an advertisement in the Los Angeles Recycler, a popular local paper, that had been placed by Lars Ulrich. Lars was a drummer looking for fellow metal enthusiasts to form a group with. He and Ron McGovney contacted Lars and the three soon found that they were influenced by the same groups and sound. Lars recruited James and Ron into his new group, Metallica, along with lead guitarist Dave Mustaine.

The members of Metallica enjoyed a rare musical chemistry and focus between them, and that mutual understanding quickly created a tight sound. Mustaine’s talents were beyond doubt and his shredding skills elevated the groups sound, but his brash character, and occasional drinking bouts led to some disagreements in the group. After an intensive period of rehearsals, during which they perfected their covers filled repertoire, they finally began playing regular gigs in the LA metal circuit in the summer of 1982. It wasn’t long before the band gained a local following and their reputation grew fairly rapidly.

Metallica played many well-received shows in the Bay Area, and during one visit there they witnessed a phenomenally talented bassist called Cliff Burton. Burton was playing with a little-known metal band named ‘Trauma’, somewhat flamboyant in nature, James later described them as a ‘Glam-rock band’. Lars Ulrich and James approached Burton to join Metallica, Cliff liked the idea but insisted that they would have to relocate to San Francisco in order for him to join the group. Unwilling to lose the technically gifted Burton as a group member, Ulrich, Mustaine and Hetfield relocated to the growing Bay Area Thrash Metal scene and Ron McGovney was replaced by Cliff.

The bands’s first demo ‘No Life ‘Til Leather’ was recorded in July 1982, and it was incredibly well-received in the Bay Area, the pre-internet tape-trading circuit went insane over it. The band soon came to the attention of East Coast Metal producer Jon Zazula, and they soon were given the opportunity to record their first album, in New York City. Unfortunately before they ever got to record a note more line-up changes were to occur.

Dave Mustaine’s unreasonable behaviour, frequent drink and drug binges, and constant disagreements with other band members finally became too much for James and Lars, and after a gig in New York, just prior to the recording session, Mustaine picked a fight with members of Vanderberg, a Dutch hard rock band that Metallica were supporting. Mustaine was kicked out of the band unceremoniously the next day, and he went off to ultimately found Megadeth. Metallica were suddenly without a lead guitarist and Jon Zazula came to the rescue, helping James recruit Kirk Hammett from ‘Exodus’.

One month later recording on Metallica’s debut album finally began, and ‘Kill ‘Em All’ was eventually released in early 1983. Zazula funded the $15,000 cost of recording out of his own money, and he had been instrumental in convincing the band to change the original title for the album from ‘Metal Up Your Ass’, as he thought that would put distributors off the album. With the new, slightly friendly name he managed to get the album distributed throughout North America and Europe. The offering was labelled as revolutionary, and even virtuosic by the metal press, and Metallica’s popularity grew in leaps and bounds.

The next few years were arguably Metallica’s finest period in terms of musical output. A second album ‘Ride The Lightning’ was recorded in Copenhagen in 1984 and released later that year. The developing chemistry between the bands members produced some of the finest tunes in thrash metal history, its influence on other upcoming thrash bands was immense, including Dave Mustaine’s newly formed Megadeth, and thrash become hugely more influential and popular as a sub-genre as a result.

The mid eighties were a time when heavy metal transformed greatly, technology had in part helped Metallica create the crisp and clean sound for which they were quickly becoming known, but the genre was also being diluted in the eyes of many rockers by an invasion of glam-rock groups, with cheesy lyrics and pretty-boy members with over-permed hair. Metallica took metal in a different direction entirely, and were largely responsible for the ensuing popularity of the thrash metal genre, but the best was yet to come.

Master of Puppets and The Death of Cliff Burton (1986)

1986 was the year that saw Metallica’s greatest musical offering, and also the bands greatest tragedy. March saw the release of ‘Master of Puppets’, the bands third album and most magical offering yet. Eight beautifully crafted tunes were packed inside, and the band finally began to achieve some of the considerable success and recognition that their talent deserved. They began touring later that year to support the album, and in Sweden, on the night of September 27th the tour bus veered off a country road and overturned, killing Cliff Burton at the age of just 24. Metal had lost one of its most technically skilled guitarists and Metallica had lost one of the cornerstones of the group. The band members were devastated, but James kept them going during their darkest time, recruiting Jason Newstead from ‘Flotsam and Jetsam’ to replace Cliff, and organising a postponement of the tour in order to get Newstead up to speed.

Metallica’s musical legacy since then has been well-established, and albums such as 1991’s ‘The Black Album’ helped introduced a whole new generation of fans to thrash metal. The band’s influence upon music in general and metal in particular has been without equal since perhaps the days of Led Zeppelin. Even now in 2018, Metallica show no signs of retiring, they have amassed a huge array of awards, perhaps most notably nine Grammy awards, and their tenth studio album ‘Hardwired… to Self-Destruct’ was finally released in early 2016, eight years after their previous offering, and to the relief of James and Lars, who have been fielding questions about its release for years.

James’s persona is irrevocably tied up with Metallica, so long have the two been attached to each other. His reputation as a vocalist is formidable, but perhaps not greatly admired by those unfamiliar with heavy metal, yet his skill as a guitarist is perhaps easier for those who don’t enjoy metal to discern. Rock author Joel McIver listed James as the eighth most influential rock guitarist of all time, Guitar World saw him as more important, naming him the second most influential alongside Kirk Hammett. Similar accolades to his rhythmic skill have been offered by Rolling Stone magazine and Guitar World magazine, both highly respected in the music industry, but surprisingly James has little time for the attention, preferring instead to let his music do the talking for him.

Hetfield has been vocal in recent years about his dislike of musicians and celebrities who weigh in on political matters, asserting that people should make up their own mind about current affairs, and not be influenced by a musician, no matter how much they like the music. The only brush with politics Metallica ever had was when their music was used to ‘soften’ up prisoners at Guantanamo Bay. Originally James supported its use but the band later recanted, and requested that the US military not use their music at the camp.

James has also avoided many of the other traps of mega-stardom, particularly those that seem to befall rockers. He has had problems with alcoholism in the past, but confronted his demons after the departure of Jason Newstead from Metallica in 2002, and he has been sober ever since. He has been the victim of a few on-stage accidents however, most notably in Montreal in 1992 during the Metallica/Guns & Roses Stadium tour, when some pyrotechnics ignited prematurely directly next to him. He suffered second and third degree burns in the incident and was fortunately protected from worse injury by his guitar, but he was nevertheless back on stage 17 days later, complete with bandages, to continue the tour. James also has an annoying habit of breaking his arm due to his love of skateboarding, it has prevented him from playing guitar on stage in the past, and he now has a clause in his contract that prohibits him from skateboarding during a tour.

In April 2009 James, Lars Ulrich, Kirk Hammett and Cliff Burton were all inducted into the Rock and Roll Hall of Fame. Cliff’s father was at the ceremony to represent him and James revealed that the band would never have made it through their early struggles, both financially and personally, without Cliff’s calming influence on the other band members.

James married his wife Francesca in August 1997 and the couple have enjoyed a long happy relationship ever since, James has credited his wife for helping him abstain from alcohol and keeping him down-to-earth. They have three children Cali, born 1998, Castor born in 2000, and Marcella born in 2002, and they live in Belvedere, California.