The 2000s were a wild time. People moved from flip-phones to smartphones. MySpace went and Facebook came. And almost every television program was replaced with either reality shows or televised poker. It seems like a lifetime ago that televised poker was such a big deal, but the trend only peaked a few years ago, around 2009. During the height of poker madness, there was one name you might have known, even if you didn’t watch the numerous competitions: Phil Ivey.

Ivey, among those in the know, is considered among the best general poker players around. With ten World Series of Poker bracelets and nine appearances at the World Poker Table finals, it’s not inappropriate that he’s been called the Tiger Woods of poker. But he hasn’t always been a poker phenom – let’s look at how his career has developed through the years, and what he’s doing now that the televised poker craze has ended.

Philip Ivey Jr. was born in Riverside, California in 1977. When he was just three months old, his family moved to central New Jersey, where he grew up.  As a teenager, Ivey would travel to Atlantic City to play poker at the casinos there. After graduating high school, he honed his developing skills by playing against his coworkers at a telemarketing firm.

By the late 90s, Phil Ivey was beginning to develop a reputation in Atlantic City for his poker skills. Especially noteworthy was his ability to play many different flavors of the card game proficiently. While most poker players settle on one style, such as Texas Hold ‘Em or Omaha high-low, Ivey was pretty good at all of them.

Ivey’s first appearance at the World Series of Poker was in 2000. There, he gained notoriety for defeating popular gambler Amarillo Slim at the final table.

The sudden success earned Ivey the nickname “The Phenom,” with some commentators also calling him the “Tiger Woods of Poker,” as a nod to his proficiency in different styles. Through the 2000s, Phil Ivey went on to win several more bracelets at the World Series of Poker, closing out the decade with ten total bracelets. No other player in WSOP history has reached 10 bracelets as quickly as Ivey, and only one other player has won more than him. He is also the only player to have won bracelets in as many different styles.

In the late 2000s, Phil Ivey helped design Full Tilt Poker, one of the most popular online poker services at the time. However, in 2011, sued Full Tilt for a breach of contract. He asked for more than $150 million in damages, but dropped the case a month later when Full Tilt released Ivey from his contract. Over the next couple years, the U.S. Justice Department pursued Full Tilt for a variety of allegations, ranging from money-laundering to outright fraud. The investigations eventually led to Ray Bitar, one of Full Tilt’s directors, pled guilty to an assortment of criminal charges, forcing him to surrender most of his assets and spend time in prison.

In 2012, Punto Banco at Crockfords, a London Casino, refused to pay Phil Ivey his winnings, claiming that Ivey had used “edge sorting” to gain an advantage. Ivey, through his legal team, issued a blanket denial of the allegations, and filed a suit against Crockfords.

Edge sorting is a way for players to take advantage of defects in the printing on the back of cards, where the left and right side of the card aren’t identical. Basically, the player asks the dealer to rotate certain face-up cards half a full turn. This lets the player tell which cards, while face-down, are low or high.

Two years after Crockfords refused to pay Ivey his winnings, he was sued by the Borgata Casino in Atlantic City, under suspicions that he was again using edge sorting to gain an advantage. Borgata also filed suit against the card manufacturer, Gemaco, who also makes the cards used at Crockfords.

A few months after the Borgata suit was filed, a court in the UK sided with Crockfords in Ivey’s suit against them, saying that edge sorting constitutes cheating and that Phil Ivey wasn’t entitled to his winnings.

Regardless of his use of edge sorting, Phil Ivey is still one of the luckiest and most skilled contemporary poker players. To date, he’s earned almost $24 million from poker tournaments. He’s also won many millions from online and in-person cash games. Some estimates put Phil Ivey’s total net worth at about $100 million, making him one of the richest contemporary poker players. 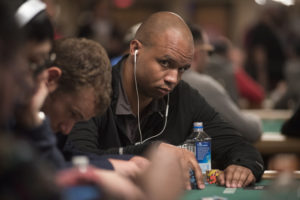 Now that televised poker has fallen back out of the mainstream, Ivey plays more casino games. He’s a frequent player at the Bellagio Hotel & Casino in Las Vegas, and also runs several programs for teaching people to succeed at poker themselves.

Thanks to his substantial winnings, Ivey has been able to frequently donate to charities. He’s a frequent donor to the Empowered 2 Excel program, which assists underprivileged children in Las Vegas. He also created the Budding Ivey Foundation, which hosts charity poker tournaments. While most money from Budding Ivey goes to Empowered 2 Excel, it also contributes to a variety of youth literacy programs and food security programs.