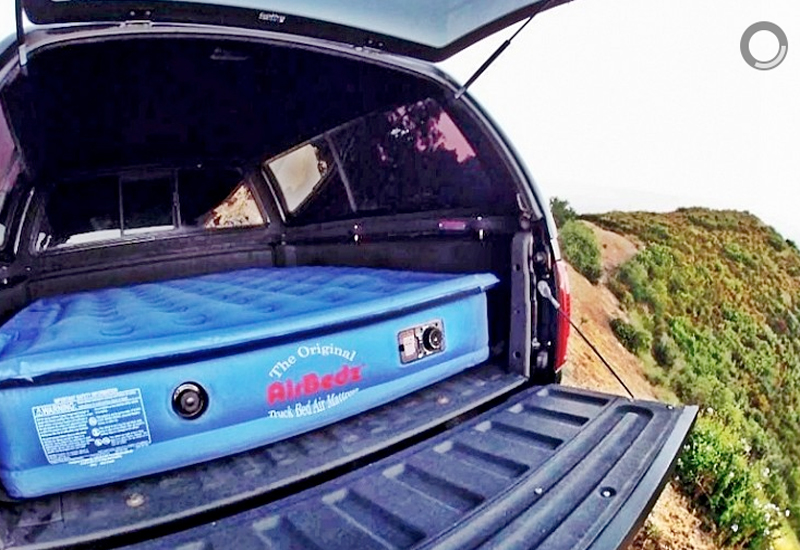 Jim Pittman has traveled from California to the Shark Tank to seek an investment for his company, Air Bedz. Air Bedz is the original truck bed air mattress, and Jim has come to the Shark Tank to seek an investment of $250,000 in exchange for 15% equity in his company. Air Bedz is a custom designed and fitted air mattress specifically made to fit into the bed of a pickup truck. Their greatest features are the filling of the mattress with air, which allows for the mattress to go around and on top of the wheel wells in the bed of the truck. This creates a safe barrier which allows the entire back of the truck to be utilized.

With their rugged heavy duty cloth construction and built-in pump with inflate and deflate options, this creates a mattress that will offer a nice night’s sleep at only an inflate away. As Jim explains how heavy duty and rugged the mattress is, he jumps up on top of the mattress, which has the demonstrative pick-up truck parked on top of it. Jim knows the product and knows it will be a big success. Robert, however, asks “why.”

In response to Robert’s question, the entire Shark Tank is quiet for a moment. Jim then explains that he knows the camping and outdoors industry is a $56 billion per year industry. Robert, however, asks if there is that big of a need for people to sleep in their pickup trucks. Jim confirms that there is a major need to sleep in a pickup truck. Still, Kevin gives the hypothetical of 1 in 10 guys who own a pickup truck actually wanting an air mattress in the back of their truck. How does he find them, and sell those air mattresses? How much does it cost to get to that customer?

Barb then asks an interesting question; how easy is it to pump up the mattress with air? Can Barb herself do it as a woman? Jim then demonstrates how easy it is; simply press the button, and the bed will begin to inflate. The pump not only inflates the mattress, but can also deflate it. The power source is a simple rechargeable 12-volt battery, which is included in every Air Bedz purchase. This simply plugs into your cigarette lighter where it then charges. The saying is, “from bag to bed in 2 and a half minutes or 3 minutes, dependent on the application of your truck.” 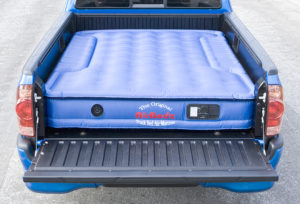 Kevin then says that Jim has come to the Shark Tank to seek money to expand his business to build inventory, but Jim says that they have about $400,000 sitting in inventory. Kevin asks what the $250,000 will be spent on, and Jim explains that they will use this money to bring in additional staffing. Robert, however, asks why Jim has so much inventory in a warehouse. Jim bumbles for a moment, but then explains that this is truly a one-man band at the office. Jim is dealing with the distribution and marketing, but Robert asks why there is so much inventory. Jim says that he chose to buy that much inventory.

Kevin then says that he has the feeling that this is a very small, niche market – what percentage of people really need a mattress in their truck? Jim says that Kevin should go to any desert, beach, or forest, and people will be sleeping in their truck. Robert then asks if he can finally step up and try out the bed, and Jim tells Robert to jump on it. Robert, with the assistance of a ladder, steps up onto the bed of a truck and performs a dive onto the bed. The bed and truck bed fall down a bit, but the mattress remains sturdy.

Mark says that while Robert is sleeping on the job, like usual, he would like to ask Jim some questions. Mark asks how much money Jim has invested into Air Bedz, which Jim estimates to be $250,000 of his own money. Daymond asked where that money came from, and Jim explains that he is an independent household contractor; he typically bulldozes smaller houses in order to make room for new, bigger houses on the lot.

Barb asks how much competition is out there, and Jim says that there is only one competitive product out there. However, that company does not have the same infrastructure due to the patent of the technology in Air Bedz. None of them have the built-in pump, and Robert admits that he has never seen any air mattress with a built-in pump. Mark then asks why Jim is not selling more units with $400,000 worth of inventory sitting in a warehouse. They are online and in various stores, so why are people not ordering? Kevin explains, the market is a fractionally tiny market. Although Jim has the best product in the world, he is only profiting $100,000 per year.

Mark asks how Jim intends to correct this problem, and Kevin says with pouring money into marketing, but Jim shakes his head to this. Kevin then asks Jim why he is only selling $200,000 of the world’s best back-of-the-truck air mattress, despite having no competition. Jim thinks for a moment and says with the expertise of the Sharks, he can find more sales. Kevin interrupts Jim and says that none of the “bozos” nor him are air mattress experts. Still, Jim feels that air mattresses have already been around for 20 years and they will be around for 20 more years. 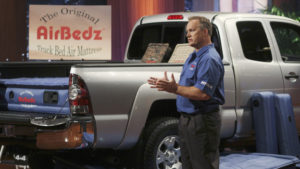 Mark calls Kevin “the undertaker” and says that he disagrees with him, and then explains that since Jim is the only player, it does not have to be a huge market; he can dominate a niche. The problem is that Jim has not been dominating, although he has a great product. Something is missing in the story of Jim’s numbers. Kevin then butts in and says that all he knows, and all he wants to know, is that Jim is selling few Air Bedz. Mark then says that Jim is only digging himself in deeper holes with his justifications; if he had his life savings on the line in a business and he is not selling, then he does not eat. Mark is not above eating mustard and ketchup sandwiches. If Mark were in Jim’s shoes, he would be going door-to-door and selling to every single driveway that had a truck in it. It is not the money from the Sharks, it is Jim’s effort, so for that reason, Mark is the first Shark out.

Kevin says that although all five Sharks agree the mattress is the best, Jim is selling no units. Kevin believes that it is still a tiny niche market since he has not been convinced otherwise. Kevin is the second Shark out. Robert agrees with Kevin, ultimately saying that Jim is not selling. He may have a great product, but he is not selling it, so Robert is also out in short order.

Jim explains that he chose to take the market slow since he wanted to test out the market and his product, and all he has to do is move the product into more stores. Daymond then says that he feels as though Air Bedz is still in the testing phase, but he will not put up his own money in order for Jim to continue testing. Daymond is out of the deal, as well. Barb is the last Shark remaining.

Barb sits for a moment, and starts by saying that she loves the product. There are a lot of guys with trucks out there, but there are a couple detailed questions in her question; the first is does Jim have a patent, and are those patents for the blow-up device or the mattress? Jim has four patents on the mattress. Barb then says that what bothers her most about the pitch is that Jim is not a salesman; he cannot sell. What will he do to convince Barb to put up her money? This is Jim’s one last shot.

Jim says that they do have an existing list of 3,500 contacts which they can contact, but Jim has not had time to do this since he has been running the business on a day-to-day basis. Barb, after taking some more time to make her decision, extends an offer of $250,000 in exchange for 50% equity in the company.

Jim, in the end, does not accept Barb’s offer.

Air Bedz Now in 2018- The After Shark Tank Update

Since the appearance of Jim and Air Bedz on Shark Tank, Jim has refined his product or has sought outside help in order to properly sell. Now, the Air Bedz website is a modernistic 2016 website which includes a variety of information such as truck dealers, and even offers a simple checklist where an owner of a truck can navigate directly to the page that contains the Air Bedz they need. Air Bedz are available at a variety of retailers including Costco, Sears, and Sierra Trading Post. The prices of Air Bedz have fallen down somewhat, as well. Air Bedz is currently available at retailers in 36 different states.

In addition, Jim has added on additional products to the Air Bedz line, including Air Bedz Pets, accessories, a backseat mattress, and even making air mattresses which incorporate his patented pump technology.