Sharon Osbourne is a well known music manager and media personality, and she is perhaps best known for her marriage to Black Sabbath lead vocalist Ozzy Osbourne. Sharon has been wildly popular as a reality television personality over the course of the last decade or so. One of her most iconic work has been as judge on shows like America’s Got Talent and The X Factor. However, she hasn’t appeared on either of those programs for quite some time now. Has Sharon Osbourne decided to retire from television entirely? In this article, I’ll talk about her rise to fame, and I’ll also provide a brief update as to what she is up to today. Without further delay, let’s figure out what happened to Sharon Osbourne. 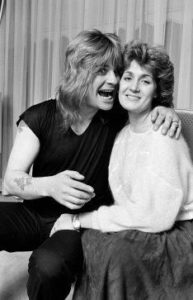 Sharon Osbourne was born Sharon Levy in Brixton, London in October of 1952. She grew up as the daughter of music promoter Don Arden. Sharon met Ozzy Osbourne in 1979, when he had just been kicked out of Black Sabbath. At the time, Ozzy was signed with Jet Records, a record label owned by Don Arden himself. Arden sent Sharon to him to look after his well-being, and the pair ended up dating shortly thereafter. Having grown up around the music industry for most of her life, Sharon was well-equipped to help Ozzy get back on his feet. She helped to organize the production of Blizzard of Ozz, Ozzy Osbourne’s debut solo album. This album would help the heavy metal vocalist to kick off a highly successful career as a solo artist, and he owed a lot of that initial success to his girlfriend.

In the years that followed, Sharon would help him release several other solo albums, including Diary of a Madman, Bark at the Moon, The Ultimate Sin and No Rest for the Wicked, among many others. She essentially served as his manager, and she did a very good job at it. In 1982, shortly following the release of Diary of a Madman, the couple were married. One of Sharon’s most significant contributions to her husband’s musical career came in the conception of Ozzfest, a summer touring festival that began in 1996. The festival features performances by heavy metal and hard rock musical groups, and Sharon created it when Lollapalooza refused to allow Ozzy onto their circuit. Ozzfest is still a seriously major musical event today, and it never would have existed were it not for the determination and ingenuity on Sharon’s part. 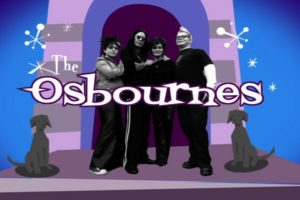 As a talent manager, Sharon Osbourne spent most of her early career behind-the-scenes. That would change in the early 2000’s, when the Osbourne family would find themselves the subjects of MTV reality television program The Osbournes. Believe it or not, Sharon is actually the person who was responsible for bringing the concept to MTV to begin with, and she got the whole thing started. She wanted to revitalize Ozzy’s popularity by ushering him into the mainstream, and today, many people credit her for making Ozzy Osbourne into the well-known pop culture icon that he is today. The Osbournes followed the life of Ozzy and Sharon, as well as their two children, Kelly and Jack. The program was tremendously popular, and its first season is thought to have been one of the most-viewed seasons that has ever aired on MTV. The show had four seasons before it ended, and by that point, the Osbourne Family had become mainstream celebrities. 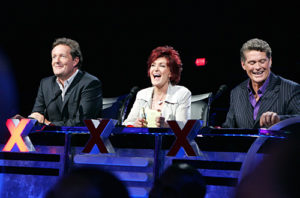 That wasn’t the end of Sharon’s television career, however. In 2003, she briefly hosted her own talk show, The Sharon Osbourne Show, which was eventually cancelled due to lackluster ratings. In 2004, she entered the UK’s The x Factor as a judge and a mentor, which placed her even more prominently in the public spotlight. Sharon was well-liked for her compassionate and kind demeanor towards contestants, which was considered a welcome contrast from Simon Cowell’s cold act. However, Osbourne was frequently criticized for her short temper, which often resulted in awkward confrontations and arguments while the show was being filmed live. She dropped out of The X Factor following its fourth series in 2007, saying that her tendency to say things in the heat of the moment may have made her an incompatible match for the program. However, her career as a talent show judge wasn’t over yet.
Later that same year, Sharon came on as a judge for the American competitive reality show America’s Got Talent, during its second season. Sharon was well-liked on the program, but she also got into little tiffs with some of her judges from time-to-time. The most notable one was actually during her first taping with the show, when she got into an argument with Piers Morgan for what she believed was bullying a child contestant. She served as a judge for the program through its seventh season in 2012. While Osbourne worked on that show, she also served as host for Rock of Love: Charm School, co-host for The Talk, and as a guest panelist for Loose Women. She kept herself very busy in television, but after she left America’s Got Talent, it seemed like she had stepped out of the public eye in a major way. What is Sharon Osbourne doing today, exactly?

Although her work on America’s Got Talent was arguably her most iconic “role” in television, a lot of people still really love Sharon for her work on The X Factor. After all, the partnership seemed to make the most sense. Who would be more qualified to judge musical talent and marketability than someone who has managed the likes of Ozzy Osbourne, The Smashing Pumpkins, and Lita Ford? Well, earlier this summer, it was announced that Sharon Osbourne would be returning to The X-Factor as a judge, alongside Louis Walsh, Nicole Scherzinger, and Simon Cowell. She will be appearing in the thirteenth series of the British reality program, which premiered in August earlier this year. It’s currently unknown as to whether or not she will continue to judge after this series ends, but even if she doesn’t, I think it’s safe to say that you’ll continue to see Sharon Osbourne on your television screen for the years to come.