Dallas and Mike, the so-called revolutionaries of the kissing industry, are not your typical young adult males. They both come from strong moral backgrounds, but that didn’t stop them from inventing Kisstixx. Would the Sharks take a bet on this unlikely business? Lets take a look. 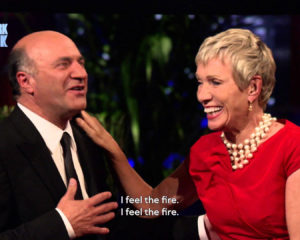 Dallas Robinson and Mike Buonomo started off their segment with their introduction video. They introduced themselves, and told the audience that they were from Salt Lake City Utah. The pair became friends in college. They created a product that “creates a chemistry between two people.” Dallas said that they walk a fine line with their product since they came from a strong moral background. However, they felt like they found a way to incorporate that into their business, Kisstixx. Dallas continued, stating that their families and especially their wives have been super supportive of their business, even getting jobs to support their husbands. Mike said that they’ve gone as far as they can by themselves, and they were looking for an investment from the Sharks to hlp them take their business to the next level. The video ended with the two kissing their wives next to a pond.

The two walked out on stage matching button-down black shirts as well tightly fitting jeans. they are also wearing different colored ties. Dallas and Mike introduce themselves end grade at the sharks. They wanted a $200,000 investment and exchange for 20% of the company. Dallas said that when he was a high school senior, the only concentrated on getting cute girls to kiss him and having fun in the sun. He told the sharks that those two activities didn’t mix well, as the sun give him dry and chapped lips. Dallas said he tried to every lip balm out on the market to help with his problem, but the major brands taste like cherry cough syrup. He said that it was disgusting, and know that there is a better way to soften up his lips so he had better “game” with the ladies.

Dallas said that he invented Kisstixx, which comes packaged with 2 compatible flavors that actually mixed together well when you kiss. Mike said that it was an actual chemical and chemistry reaction. they brought samples of intriguing flavors such as strawberry daiquiri and pina colada. Mike said that when you combine those two you get Miami Vice. Like the drink. the next sets were peaches and cream,and raspberry lemonade. Matilda sharks that their highest selling combination with fire and ice where 1 created tingling sensation and the other one heats up.

Dallas told the sharks that they had brought their fully functioning kissing booth to the Shark Tank. On the stage was two chairs right next to 8 up table full of samples. Dallas above the kissing booth always features a beautiful lady so he requested that Barbara help him out. She didn’t get up immediately, asking who was going to kiss her first. Mark left and said Kevin should be the one. Dallas and Mike invited the two sharks down to their kissing booth and the two reluctantly made their way to the stage. Dallas sucked up to Barbara a bit, and told her that she was hot enough already, so she would be starting with the ice. Bella’s told Kevin that they picked the fire for him since he’s a little hot-headed. Robert with them used, and ask Barbara if she was really going to kiss Kevin. Barbara laughed and said that she hoped not.

Barbara said that the ice lip balm felt tingly. Kevin said that if he turned to stone he would be pretty unhappy. All the sharks laughed. The remaining sharks on the stage start chanting kiss kiss kiss kiss. Barbara still seemed hesitant, Kevin said that they needed to try it out and make sure that it works. Robert told them to just smooch already. Kevin started to put his arms around her, and Robert told him not to grab her. Barbara was getting embarrassed, and put her head in her hands. Daymond told them not to get their Dentures locked up. Kevin said that he felt the fire before attempting to lightly peck Barbara. She covered her eyes with her hands, and leaned in. Kevin said that he didn’t get there. Dallas told them that they had to hold it there for just a second for the chemical reaction. There is an awkward moment is Barbara Ann Kevin kissed for what seems like an uncomfortable amount of time. Kevin said that it was very tasty as he pulled away. Damon said that it was truly disgusting in a very high-pitched voice.

Damon to ask Kevin if you felt anything, and Kevin said that there is definitely a change in flavor. Ask them who was feeling the chemistry and was ready to invest in them. Kevin Stammered, asking if they had any sales. Barbara interrupted him the same that she wanted to add for the record that kissing Kevin did not change her feelings about him at all. Robert let her know that she would always remember that moment. Mark asked how the product worked. Dallas said that they had always had in their minds that they wanted the lip balm to change flavors. Dallas said that a team of chemists came up with the slavers that actually work well together and work is with them. Kevin asked again about sales.

Dallas add that they’ve been doing business for about a year, and they cleared $80,000 in sales. Kevin ask them what he thought a business with $80,000 in sales would be worth and Dallas told him that it was worth sales plus a half. Kevin said that if they believe that they would value their business out about a hundred and $20,000, but with their investment ask they were valuing their company at a million dollars. Kevin want to know what the problem was. Dallas told him that he had paperwork 4 getting them into Walgreens, which was one of the largest drugstore chains in the in the United States. Kevin I asked if it was a test run, or if they were committing to every story. Dallas told him that they wanted to roll out Kisstixx and 7500 stories to start out with. He said that Walgreens was planning on ordering $540,000 worth of product.

Mark asked what it cost to make one of the lip balms. Dallas told him that it varied from $0.85 to $2 depending on volume. Mark asked if that was for just one lip balm, the Dallas let him know that was for both of the lip balms and the package. Mark followed up by asking how much they wholesaled it 4, and Dallas told him $3 a unit. The stores then turn around and sold the product for $5.95 per unit. Kevin asked how much they would make on the order Walgreens, and Dallas told him that they would make $337,000. Daymond looked impressed.

Robert wanted to know how they were able to get in to Walgreens. Dallas said that he went around trying to find people who worked at Walgreens. That was how they were able to broker the deal. Robert continued, asking about the customers who have purchased the $80,000 in sales. Mike said that they mainly sold on their website, but they also had kisstixx at over 100 locations at the moment. Mike said that they also got approved to sell at almost 500 food stores 2 weeks ago. Mark asked where they saw it going. Dallas said that they wanted to try out more mix and match kissing products, Such as kiss mints which is a breath spray. Mark said that sounded cool. Dallas said that they had a similar idea, but was gone. Barbara said that she was out because her gut was telling her no. She did mention that it could be just an aftereffect of having to kiss Kevin O’Leary. Kevin said that he was impressed with what they’ve done but he couldn’t get to that million dollar valuation. He said that was what was holding him back. He did say that he didn’t turn to Stone when he kissed Barbara. He went out, saying that he didn’t know what it says that the two people that try the product were not investing.

Robert said that he was on the fence and wanted them to sway him. Dallas said that he and Mike were two of the hardest working guys but they could invest in. Instead of just sitting idly by, they went out and knocked on doors and got some more sales. Mark wanted to know how they would use the $200,000. Dallas inform him that they would use a large chunk of it for inventory for the Walgreens order. The rest of the money would be used towards marketing and distribution. Mark said that he really liked what they were doing, but he thought the valuation was too high. He offered them the $200,000 in exchange for 40%. He said that the good news about that he will be there to help Finance all of the inventory as they grow, without asking for more equity. Dallas and might seem to consider, they had to other sharks still in.

Daymond told the two that Mark made a better deal then he was planning on doing. He went out. Robert looked up with crazy eyes, and said that he loved to compete and win against Mark Cuban. Robert considered, but said that it was still a better offer than he would have made. Robert also went out. Mark told them that they need to make a decision before he went out. Dallas and Mike didn’t bother to negotiate, they just accepted marks offer as is. The three shake hands. After the to entrepreneurs left the stage, Robert ask Kevin if there is a tingle after he kissed Barbara. Kevin agreed that there was, saying that you get a little burst of flavor. Robert wants to know if that made him excited. Kevin said that there was more than that. As the short shifted and comfortably in their seats, Kevin said that he also got a burning sensation.

Kisstixx Now in 2018 – The After Shark Tank Update 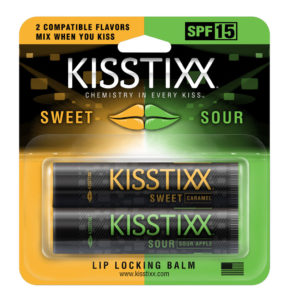 Right after their episode aired, Kisstixx was drowning in orders. The new vloume even crashed their website. Dallas and Mike sent out a bunch of samples to distributors, and they ended up getting into a bunch of new stores. According to the Kisstixx website, they are featured in Harmon, Kmart, and even Krogers, which is a food store. Their social media sites haven’t seen much action since the summer of 2015. You can still buy KissTixx for yourself on their website, as well as on Amazon.