Before he invented MisoMedia, and went on the Shark Tank, Aviv was raised by two people in the music industry – his mother was an opera singer, and his father was a sound engineer. Would his innovative app be enough to attract the attention of the Sharks? Let’s take a look. 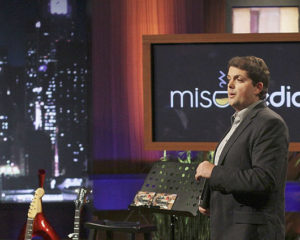 Aviv Grill walked out into the Shark Tank, and onto the stage. He looks like he was holding a tablet. There were a few guitars set up on the stage. He introduced himself as the CEO of MisoMedia and asked for $300,000 in exchange for 5% of the company. He said that the firm would change and revolutionize the digital music education field. Kevin grunted and said that he hopes that MisoMedia had some sales. Daymond called him greedy. Aviv said that there are a lot of different aspects to MisoMedia. He told the Sharks that the first commercial application had launched in June of that year for iPad and iPhone. It taught consumers how to play a variety of string instruments, including Guitar, Ukulele, Bass, and Banjo. Aviv said that there are a couple of different ways that the app could be used, and he demonstrated these to the Sharks.

Aviv sounded very nervous, spring feeling a lot of odds and ends into his speech. He opened up the tablet and said that if you didn’t have a real instrument, you could use a virtual device that they provided in the app. Aviv chose a ukulele to demonstrate with. He said that he would start with a song he liked called Be OK by Ingrid Michaelson. Aviv said that it works similarly to Guitar Hero, where the notes scroll down the neck of the guitar, and as they hit the yellow bar, you play them. Aviv played a few recognizable notes from the song. He said that there’s also a way to do it where you could use an adapter, as well as a real instrument. The adapter allows you to plug the guitar directly into the iPad.

Aviv grabbed the ukulele which was already connected to the iPad and played the same notes. Aviv said that he wasn’t able to do the song justice, so he brought along Ingrid Michaelson to play the song herself. Ingrid came out, and shows the electric guitar she played she played this song, and the app followed Along on a big screen behind her. Robert asked if the app makes him sing and sound like her. Ingrid told him that she did come with the app. Daymond and Robert laughed and said that they were in. Kevin stated that he was very smart to bring Ingrid Michaelson out here to sell the product. Aviv thanked him and stated that she was also an adviser to MisoMedia.

Kevin and ask him what his background was in, and if you’ve told him that his mom was an opera singer, and his dad was recording engineer. He had grown up with those things all of his life. And he said that he had worked in the industry, but it was his first tech company. Aviv said that he debuted the technology and closed an investment round with Google Ventures. Aviv said that Google invested $100,000, and he also got people such as Justin Timberlake coming on board and the company. Kevin left and complimented Aviv on his name dropping. He has to leave if he had to be a hardcore musician to use the product. He asked to believe you me some easy as customers would be, musical Geniuses are hackers. Aviv said that he was targeting both. He wanted to reach the castle musician. He stated that sheet music was the 600 million dollar a year industry. Kevin wanted to know if he was selling sheet music and having said that he was. He said that customers had a capability of purchasing sheet music through in-app purchases. Robert wants to know what his sales look like. Aviv told him that he had done 80000 downloads in the last month. Mark wanted to know exactly what people were downloading. Aviv said the iPad app. Robert asked if he was talking about the app that let you play the music for it on the iPad. Daymond wanted to know how much the app cost and have you told him that it was free.

Robert wanted to know how he was able to make Revenue off of a free app. Aviv said that they had in-app purchases where they could buy sheet music from a vast catalog which is growing every day. Aviv said that they were able to convert 8% of users to paying customers. Robert wants to know what the customers were paying for, either the sheet music for the upgrade app. Aviv said that they’re paying for the sheet music. He stated that he was hoping that people wouldn’t just come out and buy one song, but continue to purchase music once they’ve learned one song. Robert said that the idea was that you would make a community out of the app, and once they’re there they can buy the sheet music. Aviv the great that that was missing Medias objective. Robert told him that he just found a clever way to go after a traditional Market. Aviv said yes, and stated that they had also invented some amazing technology.

Robert told him that he wasn’t planning on selling that, he just wanted to make it part of the packaging of the app. Aviv said that digital sheet music sales haven’t been very successful. Robert told him that he made the idea that sexy. Daymond cut in and stated that Aviv was valuing the company at 6 million dollars. He wanted to know where is it was getting the value from period add that he was basing it on the traction of the technology. Kevin wanted to know what the last round of investment was done, and Aviv said that it was a 3 million dollar valuation. Kevin asked why he had to pay twice as much as Google. Aviv said that they had a lot more software to offer Now. Kevin wants to know when the last round was done, and if you’ve told him that was in December. Kevin wanted to know if the company had doubled in value in the last six months, and have even insisted that it had.

Barbara asked what made him think that MisoMedia had increased in value in the last six months. Aviv said that he thought the valuation went up as soon as Justin Timberlake, Ingrid Michaelson, and Google have gone on in. Kevin wants to know if it works for every instrument or only string instruments. Aviv said that the current APP was only for string instruments book that MisoMedia was also working on Notation which would make the technology available across all platforms. He stated that the note detection technology already collaborates with all instruments. Mark wanted to know what their total revenue was, and having said that the sheet music downloads equated to about $40,000 in sales. Daymond told Aviv that something wasn’t heading up for him. He said that meant, so media had incredible artists lined up, Google, and people who had money that was invested. Daymond stated that he felt insulted by the offer of 5% for the business.

Daymond to ask Aviv if he wants to make a deal on the Shark Tank. Aviv said that he would love too since all of the Sharks are break billion investors. Came in to ask why the valuation was 5%. He insisted that something fishy was going on since we’ve already had everything he needed to make the business successful.

Daymond said he didn’t want to waste his time, so he went out. Barbara cut in and stated that she had been burned by technology businesses before. She said that they go through money way too fast. She went out. Kevin wants to know if he found all the intellectual property on the code of the app. Aviv said that he did. Kevin told him that he had an exciting platform for the app, but he had no idea if it would be a successful or not. Kevin said that he would be willing to offer $100,000 in exchange for 3 and a third percent. He said that that would put the business at the same valuation as the last round of investment. The Sharks told Kevin that he had to give him the $300,000, but Kevin said that he just wanted to provide $200,000, and Aviv would have to raise the other funds elsewhere. Interested in getting capital at the 300 million dollar valuation. He said that he had other money on the table already.

Robert told him that that was a bit of a problem, and said that he was willing to give him the entire $300,000 if Aviv was willing to consider it the same value that he took initially. He wanted $300000 in exchange for 10%.  Robert told him that he already had himself in exchange for 10% of MisoMedia. Kevin said that he was having a problem having to pay twice as much when here to only close the deal 90 days ago. Aviv said that he would be willing to do the $300,000 in exchange for 7% equity. Kevin let him know that he was the only 300 basis points from where they needed to be. Aviv said that the real issue was that if he lowered the valuation too much, he thought that it would hurt him on the other end while he was raising the rest of the money that he needed. Robert went out, unwilling to negotiate.

Mark wanted to know what would accelerate this to a multimillion-dollar business. Aviv said that music education is already in 9 billion dollars a year industry, which is a huge Market. Mark wants to know if he saw the capability to do a paid premium version of the app, and upsell people with the sheet music. He said that he would be open to doing that. Mark stated that he would do $300,000 in exchange for 8% by himself. Kevin indicated that he would be willing to offer up $100,000 of it, and then Aviv should take as many Sharks as he could. Kevin increase this offer said that he would you do half of it. Mark told me that he didn’t need Kevin since he was already willing to do the entire deal. Aviv took the agreement, and Mark went up to the stage to shake hands. Aviv walked off the stage with Ingrid Michaelson, the other Sharks all teased Kevin for losing out on the deal. Kevin told them that he still had his cash, so he was all right.

Misomedia Now in 2018 – The After Shark Tank Update 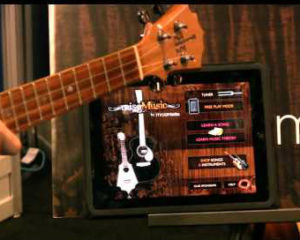 Even though Miso Media was heavily downloaded after their appearance on Shark Tank, it looks like the app has completely disappeared from the app store in 2016. According to an article on 2paragraphs.com, the company ran out of money and closed down in 2013.