Julie Thompson from Atlanta, Georgia, has just entered the Shark Tank and is seeking a $100,000 investment in exchange for 20% equity in her company, PullyPalz. Parents love pacifiers since pacifiers soothe babies, but those pacifiers constantly fall out of the baby’s mouth. When Julie’s kids were baby, her baby’s pacifiers continually fell out of their mouths, and of course, the babies would continually cry because they still wanted those dirty pacifiers. Often times, the pacifier would end up just behind the baby’s shoulder, but that’s just out of sight where the baby can’t see.

So, to remedy this, Julie invented the PullyPalz. PullyPalz hang above the baby and do something similar to parents for the child’s pacifier. The PullyPalz hangs above a child, in a crib or in a car seat, and when a single pacifier falls out of view, another is easily within reach for the child. This interaction enables independence for the child, which is great for those times when parents need both hands to work on whatever is in front of them. PullyPalz also is loaded with great developmental benefits, and parents are raving about the product and creating a demand that Julie just isn’t able to keep up with. 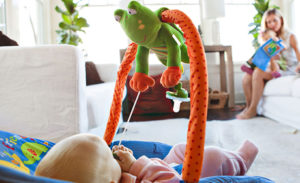 Julie then passes out samples to each of the Sharks, including Puddles the frog, and Momo the monkey. Robert agrees with Julie – when his children were young, the pacifier fell out all the time until he eventually bought a clip which would keep the pacifier close to the baby. So, what is the big difference between PullyPalz and the clip? While the clip helped Julie keep up with the pacifier, since it would never fall on the floor, the clip didn’t help the baby as much because the baby didn’t realize where it would fall out of sight.

Sales, in the last 12 months, total up to $97,000. They are sold on Amazon, and 350 stores across the United States in primarily specialty boutiques. The PullyPalz start at $19.99 and grow in cost all the way up to about $29.99, and each one costs $4.50 to make. Most of the sales are being driven from trade shows. Some of the developmental benefits for the PullyPalz include right brain and left brain training, which is important for children because this is how development occurs, when both the logical and creative side come together to make connections. This is why parents are typically asked if their baby will grab an object and pass it from their right hand to the left hand. Because both sides are in plain view, the baby is forced to grab both the left and the right.

In addition to PullyPalz, there is a new product called Teetheez, which are excellent for babies who are experiencing teething. You could easily change out the pacifier for a Teetheez to keep a pacifier on one side and the Teethez on the other end in case your baby is going through teething. On the other side of things, there is also the PullyPalz “Miniz,” which are mini versions of the bigger PullyPalz. Each Miniz comes equipped with an interactive activity; for example, Momo the monkey comes in a small version of himself with a peelable banana that is velcro. Everything is designed to work with the PullyPalz system.

Kevin then asks the interesting question of the outlying age for a child to use a pacifier – that is, what age should a child no longer be dependent on a pacifier? Julie replies that the latest age she knows of is 3 years old, but Kevin assumes to cut it down for his example. Kevin asks, what percentage of the population is younger than 24 months old at any given time? More than 4 million babies are born in the United States every year, which means about 8 million candidates are within the target range. There are a potential 8 million customers per year, and everyone is getting one, but the share-per-dollar basis is very small for the investor. The pricing point is a great concern because the parent could just go out and purchase a pacifier with a clip or an elastic cord for well under $10. However, Julie points out that those aren’t interactive. 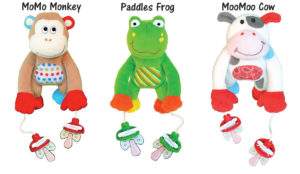 Mark clarifies what Kevin is asking – what is holding Julie back from experiencing rapid growth? Julie explains that PullyPalz is just a one person company, so far; she is doing everything herself. She designed every single PullyPalz item, right down to the exact color. Kevin explains that his sense of what is holding PullyPalz back is the price and distribution – not many parents would spend $20 for a pacifier.

Mark asks Julie how much money she has invested, which comes out to $175,000. Most of the money went to safety testing, which is very expensive, and there is about $100,000 sitting in inventory. All of the Sharks are interested in that, since Julie has essentially tied up a lot of money in inventory in order to drive the price per unit down to the $4.50 she mentioned. The investment of $175,000 came from Julie’s retirement funds, college funds, her parents’ retirement, credit cards – everything. Julie is all in.

Robert explains that he can’t get his mind over the clip product, which was far less expensive than the PullyPalz. His experience with the previous product, combined with the fact that the PullyPalz aren’t flying off the shelves, have caused him to make his mind up and leave the deal. Robert is out of the deal.

Mark voices his thoughts that because PullyPalz is so young and there is so much inventory, there is no room for innovation because Julie has $100,000 tied up in inventory. By innovating, she would devalue the inventory that is sitting there, and that is something she has to protect, so the biggest problem Mark sees is that the products are not moving fast enough which could eventually lead to the death of PullyPalz. Mark is also out of the deal. 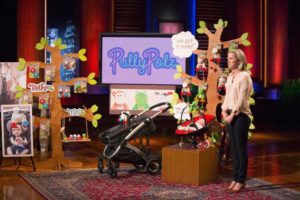 Kevin then explains that PullyPalz are two cross-sections of the children’s toy market; plush toys, and the pacifier. 97% of plush toys are sold under $10, and pacifiers are sold for under a dollar. Suddenly, there is an incredibly expensive product that merges the two of those worlds, and the price is what is truly holding it back. At a price of $9.99, Kevin would be far more interested and estimates that Julie would sell 4 times more. Since Julie can’t get costs down that low, Kevin is not interested in investing, and also exits out of the deal.

Daymond feels that the hanging functionality is mandatory in order to use the product, but Julie shows that she has developed small trees since many retailers wanted a proper way to display the product, which is very expensive. Because Julie is typically dealing with specialty stores, Julie couldn’t take PullyPalz to different stores because the stores would charge Julie money in order to have the trees properly displayed. The ability to move the product into stores that don’t require special displays is just not there, so Daymond is out of the deal.
Lori is the final Shark remaining, and she thinks that PullyPalz is an incredibly clever idea. She offers up a deal of $100,000 in exchange for 30% of the company. Lori does bring with her connections to Bye, Bye, Baby and Toys R Us, which are two popular children’s toy stores.

PullyPalz Now in 2018 – The After Shark Tank Update

Thanks to the investment of Lori, PullyPalz seems to be doing quite well for itself. While PullyPalz has not introduced any additional products, the original products shown on Shark Tank have been discounted down to $24.99, and the products are even on sale right now for $19.99. PullyPalz has a strong Amazon rating of 4.5 stars across 41 customer reviews, meaning customers are consistently happy with their purchase of a singular PullyPalz. PullyPalz is even eligible for Prime free shipping, which is a good sign and could give away that PullyPalz is here to stay.