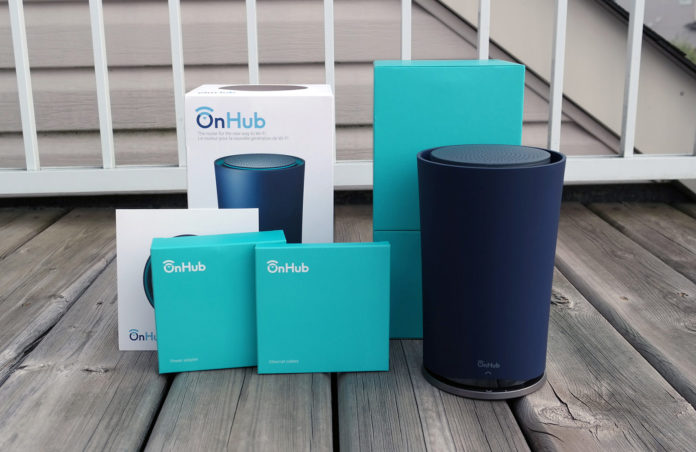 With the tagline “A Better way to Wi-Fi” the OnHub manufactured by TP-LINK and partnered with Google aims to be the router to give you the single best network experience of your life. With both 802.11 and 802.15.4 network compatibility, OnHub also wishes to be the standard of routers in the future, providing plenty of room for network innovation. Here, we take a look if the TP-LINK router hit the mark, or functions more as a paperweight than a next generation network hub.

TP-LINK Out of the Box

Having previously reviewed the ASUS OnHub device, when the package for the TP-LINK OnHub arrived I was pretty confident in what to expect. While the device was just as heavy as expected, I will have to admit that I was more than a little surprised at the packaging itself which was more reminiscent of a jewelry box than something you store tech in. The initial setup instructions also happen to be on the inside of the box, which was a small, but nice touch. Now, taking a look at the OnHub itself you’ll first notice a lack of ports. Focusing on the Wi-Fi market, there is only one LAN, USB and WAN port each. The main shroud can be removed to show off a bit of the ventilated hardware, which does need to be undressed before turning on the system. The shell itself is ribbed for increased airflow and cooling.

Setting up the TP-LINK OnHub was remarkably simple to say the least. First, after plugging your system into the ISP source and power, you will notice a ring of light appear on the top that should glow orange to indicate that set-up has yet to occur (or if it appears later, that something has gone wrong). To get started, simply download the Google On app onto your smartphone, and within a few moments the system will be updated and ready to go. From there all that has to be done is your standard network naming and password.

Unlike many other routers, OnHub is almost entirely dependent on the use of this app, only allowing for a small reset button in the back of the device should all else fail. Luckily, this app is quite intuitive and uses plain English to make management easy. Network configuration, performance testing, and prioritizing devices for better streaming or download speed can be done in just two or three taps.

After setting up the system and linking up all 6 devices (three smartphones, two standard PCs and one high end gaming PC), I began testing out exactly how much the network could handle. As it happened no matter what I managed to have going on all six devices, or where in my residence I did it, the network was stable and performed at an exceptional level. The 13 antennas most certainly aided in increasing the range of the Wi-Fi as did the reflector which when directed across the apartment, did present a small but noticeable improvement in performance.

When peak hours (around 3pm and 7pm at my residence) came around, the TP-LINK really showed its true colors. Instead of the Mariana Trench-like drop-off I have become accustomed to in terms of connectivity, the OnHub only showed a slight drop in performance for a few moments before resuming a speed that I now had a whole new appreciation for. This could easily be attributed to the fact that the router scans for the least inhabited channels every 5 minutes or so, allowing for dynamic adaptation to surges in nearby network use. This above all else has turned into my favorite feature of this router. While the in-network transfer speeds as well as efficiency handling internet transfers were excellent, the ability to get onto a network and have consistent speed made the day all the better.

While I personally did not experience any technical issues while testing out the TP-LINK, I believe in testing troubleshooting solutions well before something goes wrong. The most obvious go-to solution for most technical issues in this case would be the restart button located on the back of the router. The restart itself was rather rapid and the router showed no sign of error or distress as a result.

Within the Google On app, there are also a significant amount of troubleshooting tools at your disposal. This includes checking overall network efficiency, resetting connections and even changing such things as IP settings. However, those of us who are more hands-on with home or office networking will feel that the access is limited to higher level functions. As a matter of fact, any sort of root access is downright denied for the purpose of security. This also means any protocols that could be implemented by third party software is not a possibility with the OnHub, which is a little disappointing.

Final Thoughts on the TP-LINK OnHub

Overall, I would say this is a fantastic router for nearly anyone. From the domestic user to the business looking to improve connectivity around the office, the TP-LINK will not only perform to your standards, but shatter your expectations. This is especially true of those users who like “plug and play” technology, who don’t want to be bothered with the potentially confusing networking process. That being said, those who like tight control of their networks (for example, anyone wanting to get into computer security) may want to look elsewhere, as despite having a performance that would make most in-network tests a complete joy, directly manipulation of the router is nearly impossible.

In terms of adding range to a Wi-Fi network, this router has it in spades and only gets better with the reflector pointed in the direction of your device. Not mentioned in this review so far is a very interesting feature, the ability to use Weave to connect households to a central station. For those with Nest thermometers, Wi-Fi enabled lighting or any other manner of device, the OnHub desires to be the centerpiece of a truly connected home. While I could not personally test these features, the forward thinking ambition is certainly welcomed and can make this device “future proof”. For an average price of around $175 (or regional equivalent) at time of writing, I would say this device is a bargain and would give a high recommendation to anyone interested in taking their network up to the next level.

You can currently get the TP-Link OnHub with a pretty substanial discount automatically applied at Amazon.com by clicking here.