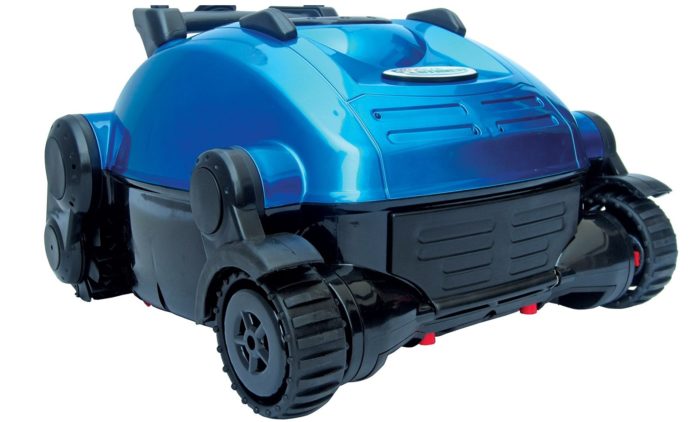 The days just keep ticking by, and I move ever closer to my once thought lofty goal of reviewing every robotic pool cleaner on the market. I have spent months researching, understanding the tech, finding out what works, what doesn’t and what is a necessity when it comes to a robotic pool cleaner. If you are looking for above ground entry level bots, head over to Aquabot, if you want a fully featured mid range machine, Dolphin might be your best bet, and if you want a few more options when purchasing then Hayward sounds like the right firm to go with. If you want a low cost core featured bot then Smartpool is a great choice.

The Climber is a low end bot from Smartpool, but unlike other bots in this price range, it comes with every core feature that you could want. I will go into more detail in the features and specs section, but know from the start that you will not get wall climbing at this price from any other firm. The build does have a few issues, ones that it shares with other bots in the line, but they are not deal breakers.

So let’s take an in depth look at the Smartpool Climber, see if it is the robotic pool cleaner you are looking for. 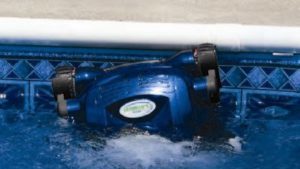 Smartpool are famous for crafting fully featured bots that are more sturdy than the competition. They lack flash, and a few of the bells and whistles of their competitors, but they more than make up for it with the build quality. This bot is the least hardy of their robotic pool cleaners, but it can still take a knock or two. The use of wheels is a bit of a sticking point, and that will come up again in this review. There are two things you need to know when buying a bot. The first to to verify that your warranty is comprehensive, I’ll go into Smartpool’s in detail later in the review, the second is to verify the core fit of the build. Simply give your new bot a shake. A rattle  means you likely have a factory fault, and should make use of your warranty.

As to the look of this build, once I got past the use of wheels I rather liked it. It is a little clumsy in places, but it at least takes a step back from the tank like design used in most other Smartpool builds. The color scheme is classic, cool blue for the pool, and there is a pleasing symmetry to it. Not of huge import is the look of the build, but I feel that when we are looking at multiple models that all have similar specs then it really must be taken into account.

Not a lot here this time. The Build quality is fine, and the look of the bot is only a little better than others in the Smartpool stable. The Climber will win no beauty pageants, but it is by no means a bad machine.

I have spent the last several months gathering as much technical and practical knowledge of robotic pool cleaners in order to provide you with the most comprehensive reviews of the products. In that time I have discovered that there are only really three features that I care about. That a bot can clan the floor well, and break up algae. Can filter the water to clarity in a short space of time and can climb walls. Now, a fair number of bots bill themselves as climbers, but few can make that 90 degree transition to the pool wall, which is the kind of climbing I am talking about. If a build cannot do all three of these things then there is little point in buying it. You will have to do some of the work manually, and that flies in the face of the very concept of robotic pool cleaners.

The Smartpool Climber can do all of those things, but only just. It is an older model, and so the ability to climb a wall was seen as a major selling point, something to set it above the competition, and it does to some extent still. But not to the extent that Smartpool would like it to. The real selling point to this build is the price, but we won’t be talking about that for a fair few paragraphs. Let’s break down the core features that are present here first, then we can talk about the legacy design choices present here.

This is a in ground pool cleaner with a 50 ‘ cable. It is rated for 20 ‘ x 40 ‘  pools. The cable uses swivel tech to prevent tangling, if you have owned a bot in the past you will know that cable tangles are the biggest reason for cycle stoppages. Seeing that kind of cable here is fantastic, and speaks volumes on the core design.In addition the on board scrubbing brushes are powerful enough to break up the clumps, and soft enough to not leave marks on the pool floor. That climbing feature is a sight to behold. it is seldom you will see a wheeled bot climb a pool, but I have seen the Climber do just that with ease.

Standard cycle time is 3 hours, but there is an option for a single hour speed clean. Speed cleaning as a feature is sometimes sold in separate models as a big thing, so it is nice to see it here as standard. There is not much else to this bot. The rapid drain system is here, making it a little easier to get out of the pool, but seen as the bot weighs a mere 17 pounds, there is little need for it.

Overall this is an interesting bot. If we were to go by the feature set alone I would put this down as a mere maybe, but when we factor the price in it is a whole different ball game. Read on for the ease of use breakdown.

Smartpool Climber Ease of Use

You will find a couple pool cleaners out there. The kind that is easy to use, all in one self contained units that I focus on, and the kinds that is less easy to use. The less easy to use kind don’t have on board pumps, and must be connected to your own pool’s pump system. This requires a fair amount of practical knowledge, and some time. I prefer to avoid them to be honest. On board pumps are plenty powerful enough that the older external pump bots are essentially obsolete.

The Climber is a more modern build, well, more modern than the pump less builds. I would still call it a legacy bot, due to its use of a filter bag and a bottom mounted filter chamber. Those two things are a little annoying. Using the climber at its core is very easy. Plug it into the area and then set the cycle.

Filter bags are more prone to user error, an improperly fitted bag can cause debris to back up, stopping the cycle. And a bottom mounted filter chamber means you have to keep flipping the bot over when you want to change and clean the bag. 17 pounds is not the heaviest bot on the market, but it gets old quick. Add in the short handle and lack of caddy, and moving the Climber around is a little more cumbersome than it should be.

Those issues are minor. I know it may not sound like it, but in the robotic pool cleaner world, ease of use is a universal concept. I have to focus on the nitty gritty details, the minor annoyances that detract from the overall experiences otherwise this section becomes, ” Wow these are all so good and easy to use”. Better I think to be up front. 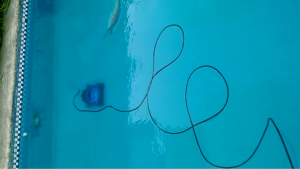 This is the section I was waiting for. The bit where all the downsides of the Climber will melt away. I only really have three features that I recommend, which are here, and there are only two legacy design choices I dislike, they are also here. But I also like saving money. And the climber is in the $350 to $550 range. Take $150 off that if you go second hand. You will not be able to find a cheaper climbing bot anywhere. As far as entry level options go this might be the best available, especially if you are like me, and are concerned about spending too much. I like to point out the fact that any robotic pool cleaner will save you time. Depending on how you value an hour they will pay you back in leisure time within a year, in less than six month if you go for the Climber though.

There is the running cost to consider. Unlike Aquabot, who released the power consumption information on all of their bots, I am forced to make  less accurate estimate. I factor 180W into a few price per kilowatt hours that are common, for your own you will have to contact your supplier.

Now to the warranty, and I wish I could break down the limited warranty from Smartpool. Tell you what isn’t covered, or find out the ways with which it weasels its way out of paying. Alas, I cannot do so, as Smartpool, like Maytronics, has not released the information to me. I have contacted them about it, and hope to hear back quite soon. In the meantime I think we can assume that it is at least as good as the limited warranty. Which means that coverage is nominal, all things that are reasonable. The Smartpool Climber comes with 2 years coverage at the very least. I will be updating this article, and others in the Smartpool range, as soon as they reply to me.

Nice bit of a change here. In the past I have been enthusiastic about the machines, but cold to the lack of information from Smartpool. They had their positives, but not enough of them to offset the lack of warranty information. With the Climber I would be willing to overlook the lack of warranty information. With this feature set, all the cores, and a few minor annoyances, legacy design issues, sold at this price, as low as $299 in some places, the Smartpool Climber is one of the most cost effective robotic pool cleaners I have ever had the good fortune to review.