Stepping into the Shark Tank is a product that is…. Intriguing, to say the least. Three women spin and dance their way in, each clad in a blue, pink, and cosmos-looking suit, respectively. The woman in the blue suit introduces herself as Sarah Bustin, and Sarah is from Los Angeles, California. Her company is Tutu Blue, and she is seeking an investment of $200,000 for a 20% stake in her company.

Sarah is here to change the look of swimwear! We’ve all been there at a day at the beach, surfing, hanging out in the sand, boating – whatever you do, you are careful to reapply your sunscreen throughout the day until you get home and find out you missed a spot. A red, painful sunburn alerts you that you missed a spot, and fortunately, Tutu Blue is now an answer to those problems.

Tutu Blue is the first of its kind, a one-piece swimsuit, made of 50 UPF fabric. UPF 50 fabric blocks out more than 90% of the sun’s harmful rays; the fabric is lightweight, durable, and comfortable (Sarah, evidently in shape, lifts her leg above her head to show just how flexible the suit is). It cleans quickly as well and actually keeps you cool, so if you are someone that constantly overheats, Tutu Blue can help you remain cool. So, which one of the Sharks are ready to swim in the waters with Sarah?

Robert asks to see an example, and while Sarah distributes samples, Mark jokes that they must all be in the same yoga class (which they indeed are) and Kevin jokes that Robert will look fantastic in a Tutu Blue swimsuit. Barb jokes that the hot pink is not her color, but all of the Sharks look over the Tutu Blue. There is a short version, as Robert points out, and he asks if it is a replacement for a wetsuit. No, Lori explains, she is protecting her skin. Robert then asks if he would wear it while paddleboarding, which Sarah confirms.

Kevin then asks, “what age woman wants to completely cover up her body?” Sarah explains that this is actually in every age demographic, and Barb agrees; women over 40 love it, since when she turned 40, her “bottom dropped out like a baby.” Kevin then asks about the sales, and Sarah prefaces it with the knowledge she has been in business for a month and a half. So, while she does have some sales, they are only $4,000 worth.

Lori admits she is curious about the product – does it “hold you in” or “suck you in,” tightening the female form? Sarah confirms that it does keep you held in (no jiggling), but it is also a lightweight fabric that simply does not allow the sun to penetrate. Robert points out that he has seen this on children all the time, and Sarah reveals that she has a children’s line, as well. Children hate wetsuits like they hate flashcards, but Kevin points out that they already exist. 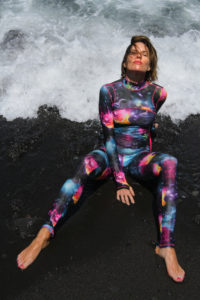 Lori, taking a quick departure from the business of it, asks Sarah if there was a reason that she invented the Tutu Blue set. Sarah reveals that a year and a half ago, she was diagnosed with melanoma, and it was really devastating. Sarah did not understand the magnitude of melanoma; every hour, a person dies from it. Still, Sarah was a very lucky person and managed to fend off the melanoma for now, and while healing she spent time in the ocean. She could not imagine that part of her life being taken away from her, so she developed an idea for a suit. Kevin admits that he thinks it is an interesting idea, as Sarah has taken an idea that works for children and modified it to adults.

Still, Kevin is wondering if there is not a way for the Tutu Blue to be popular with women that don’t want to wear bikinis. The exact word he uses is a “cougar tube.” Mark then refocuses on the business at hand, and asks about the cost for each Tutu Blue to be made; each unit costs about $47 to make, and they retail for $220. All of the Sharks are blown away – this means that she has only sold around 20 units. Robert asks how many stores she is in, and she reveals that she is only in one store so far, located down in Laguna Beach.

Unfortunately, she does not have enough of a measurable metric to determine how quickly the product is selling since her business is still in its infancy. Still, Kevin points out that she is asking for $200,000 for 25%, but Sarah replies that she knows her evaluation. Kevin explains that with $4,500 in sales, she cannot be worth $800,000. Barb points out that the way the suits are cut would accent the female form well, and Barb feels like she herself would look drop-dead gorgeous in one. Still, the business is in its infancy and it would be like buying a lottery ticket. While Barb wishes Sarah the best of luck and loves her personality, Barb is the first Shark out of the deal.

Sarah explains that she has more products in development, but she unfortunately does not have it – she actually has a print that is called “shark repellant.” Mark jokes that she is doing a good job of it her, and she mentions that she knew there would be a jab. The shark repellant would actually work with a pattern that looks like a poisonous jellyfish, which is the main thing that detracts the attention of real sharks.

Mark then points out that Sarah has to focus; she came in with a personal story that fits the product perfectly. However, she started to move outside her holy grail and the reality is, there is not a dermatologist in the world who would not see the Tutu Blue and recommend it. So, why is Sarah only stuck down in Laguna Beach? Still, Sarah says that she made it for dermatology, but Mark points out when they make an investment, they need to see the direction. The more that is invested, the more work it is to get the entrepreneur to focus. 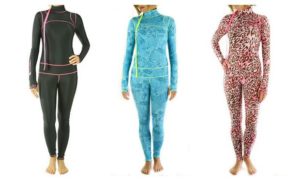 Sarah still insists that she believes in the dermatology of the suit, but Robert asks why she did not try to go to a dermatologist first. She is silent for a moment, and Robert continues; the shorter the amount of time you are in business, the more narrow the focus. Sarah asks if she could not find a cross-section in dermatology and water sports, and while Robert admits that maybe she can, Sarah’s business is only one month old. It is “too wide,” too unfocused for Robert, so he is out of the deal.

Mark points out that the evaluation is not that bad, but rather the amount of work that is bad. Sarah says that she will work hard, and she has been working since she was 14 years old, but Mark explains that Sarah is getting excited about moving in all different directions. Sarah tries to explain that she has been an actress her whole life, and Lori points out that she looks familiar; Sarah then says that Kevin is not the only “super villain” on television. Sarah was actually on the Bold and Beautiful for two years, as well as Days of Our Lives, two widely syndicated soap opera programs. Unfortunately, Mark is still out of the deal.

Lori admits that she thinks the suit is interesting, as she is not looking at the medical arena as much, but rather at the design and look of it. Unfortunately, it is still too early for Lori to feel comfortable with making an investment in Tutu Blue, so Lori is the fourth Shark out of the deal, leaving only Kevin. Kevin explains that he thinks it is a really good idea as a solution for two problems; the issues around cougarism, and sun protection.

The problem is that it would be far too hard for Kevin to make an offer, as $200,000 is far too much money. The amount of money is too much to put too early in, and Robert agrees with him. Unfortunately, Sarah does not find an investment in the Shark Tank, but all of the Sharks wish Sarah luck. Sarah is unbroken by the bad news and insists to keep moving forward, and even leads the two women that accompanied her out of the Shark Tank studio with some wild dance moves.

Tutu Blue Now in 2018- The After Shark Tank Update

Since Sarah’s appearance on Shark Tank, coupled with her popularity and a great product, I feel that it is still a bit too early to speculate on the health of Tutu Blue. However, Tutu Blue has both an Instagram page and a Facebook page; the Facebook page has a weak 1,080 followers, while the Instagram has 1,307 followers – not bad considering the business is scarcely a year old.

The most limiting factor to Tutu Blue, however, is the exorbitant prices for each suit; women’s short suits, which cover the entire upper half and only down to the mid thigh, start at the price of $195. The long suits, which cover down to your ankles, cost $220 – however, the most concerning thing is that an item is listed as “Pre-order Ready – Launching on 9/9,” and as of this writing, we are well beyond the 9/9 deadline.

As of the time of this writing, there is a page to indicate that Tutu Blue will eventually carry products for men, but the page has no products to show at the moment. Ultimately, I agree with the Sharks – Sarah must find her way and focus down while her business is still young