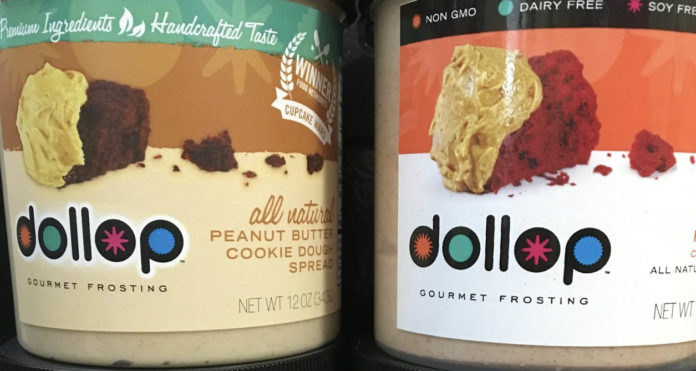 In 2009, Heather Saffer was underemployed. She hadn’t yet finished college, and she was working at a car dealership. She wanted to start a business and find something that she was passionate about. Heather noticed that cupcakes were becoming a growing trend, so she heavily researched her options on Google and Youtube. She taught herself how to bake, and decided to open a bakery in her hometown of Rochester, NY. It was an enormous failure. Even though she lost her life savings of $20,000, she decided she was going to open up a new bakery. Heather borrowed $4,000 from her parents, which led to her bakery becoming successful, and she won Food Network’s “Cupcake Wars.” She decided to try a complementary product – frosting. Would her accomplishments impress the Sharks? Let’s take a look. 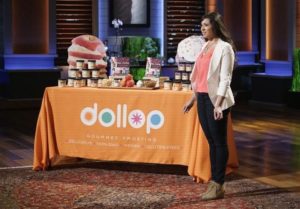 Heather Saffer walked out into the Shark Tank, and onto the stage. She introduced herself and asked the Sharks for $75,000 in exchange for 20% equity in her business, Dollop Gourmet. She claimed her product was a healthy version of “one of the scariest processed foods” – frosting. She asked the Sharks who among them did not love frosting. Heather said that traditional shelf stable frosting that you can buy at the grocery store are filled with unhealthy ingredients such as animal lard and artificial food dyes, in addition to the preservatives. She asserted that Dollop Gourmet tasted amazing, and was all natural, vegan, and gluten-free. It also did not contain GMO ingredients. The frosting would also appeal to people who were trying to cut down on their sugar intake. Heather asked the Shark if they wanted samples, and they responded excitedly.

Heather handed each Shark a platter with a cupcake that was frosted in vanilla, as well as samples of each flavor that they had. She claimed that the vanilla frosting had the highest quality Madagascar vanilla bean extract in it. Kevin said that the filling tasted great, and wanted to know what else was in it. Heather listed the ingredients as organic palm oil and organic cane sugar. Kevin wanted to know what the shelf life was, and Heather told him that lasted for a year if it was unopened. Kevin asked how she was selling the frosting, and she said that she was selling in retail locations. Heather informed the Sharks that she started the business less than a year ago, getting Dollop Gourmet into 83 Wegmans locations. Lori told her that she approved of the store choice. Heather continued, stating that she was in 215 Meijer’s locations. Dollop Gourmet would be launching into two Whole Foods stores in the next month, as well as 150 HEB stores.

Robert asked Heather how she got into the frosting business, and she launched into the company’s backstory. After a failed bakery business had taken all of her life savings, Heather decided that she was not going to let her self-taught baking skills go to waste. She opened a new bakery with a loan from her parents and even won a contest on the Food Network. Lori told her that she recognized her from that show, Kevin asked what her sales were like, and Heather said that Dollop Gourmet had done $170,000 since starting in November. He questioned her further, asking what the projections for the year would be. She informed him that it be about $200,000 for the year, maybe a little more. Kevin wanted to know what her margins were like, and she let him know that they were 40% since she was selling it wholesale.

Heather said that the frosting was made in Wisconsin by a co-packer for $2.30 a unit. Kevin told her that the number sounded high, and asked what the most expensive ingredient was. She said that the palm oil was pricey, as well as the jars. Barbara inquired how much Wegmans was selling the jars for, and Heather told her $6.99. Barbara wanted to know how that compared to her top competitor. Heather said that she knew which one Barbara meant, and told her that they were selling frosting for $1.50. Kevin said that the price difference was a huge issue.

Heather said she knew that the price difference was a lot higher, and told the Sharks that she was also selling on Amazon for $12.99. Robert and Mark looked shocked, but Heather said that they hadn’t had any complaints about the price. She said that people were willing to spend the extra money on it. Lori asked about the formula that won on Cupcake Wars, and if it was the same one. Heather told her that it was not, but that she’d written a cookbook. Robert seemed impressed that she also found the time to write a cookbook. Heather laughed and said that she researched how to do it, and found an agent, and got a publisher. Robert jokingly asked her if she also had a pilot’s license and a Ph.D.

Lori asked her which frosting won the competition. Heather told her that the recipes were in the cookbook. She changed the recipe for Dollop Gourmet since the old ones were butter based, and she wanted to make something that was good for everyone. As she stated, “it’s allergen-friendly, and that’s a huge craze right now.” Mark nodded along as he chewed on a pretzel with frosting. Robert said that he was impressed with her ambition. He told her that it was not about how many times she fell, but about how she was able to get back up. He said that he wasn’t passionate about the product, even though he liked the entrepreneur. He went out. Heather said that she appreciated his time.

Kevin told Heather that he owned the number one cupcake business that was shipped out by Fed-Ex, and he had an enormous database of customers. He stated that his intention was to make a deal with that company, Wicked, and make Dollop Gourmet a part of that product line. Barbara asked Kevin how his partner would feel about bringing in a competitor, and Kevin told her that it would be a competition, but a complementary product. Kevin said that he was expanding Wicked in providing mixes that you could bake at home. Kevin turned back to Heather and told her that he could help sell the product online.He wanted to make the investment of $75,000 in exchange for 33% equity. Kevin said that he would have to give Wicked equity to make the deal work.

The Sharks started to argue amongst themselves. Mark stated that the extra investment was not necessary, and Barbara told Kevin that he was asking Heather to take on a partner that she knows nothing about. Kevin told Barbara that he didn’t care what she thought about it, and wanted to make sure that Heather understood the offer that was on the table. Heather said that she did. Heather thanked him and stated that she appreciated the offer. Kevin asked her if she was in. Barbara indicated that she wanted to make a deal with Lori for 30% equity. Kevin called her greedy, but Barbara denied the accusation. She said that she wanted to develop the company like she made Daisy Cakes, which she was about to take from $28,000 to four million dollars. She wanted to include Lori so she could put it on QVC. Lori said she didn’t think Dollop Gourmet would be right for QVC. Lori went out.

Robert asked Barbara if she would go on her own, and Barbara said that she had to think about it. Mark stated that he loved icing, but he would eat too much of the product, and it would make him fat. Heather sighed, and thanked Mark, even though he was out. Barbara said that she would extend the same offer, even without Lori. Kevin stated that Wicked did more volume than Daisy Cakes because the cakes sold at $10,000 each. Kevin said that he wanted the extra equity to get his partners into the deal. Robert clarified that the equity was primarily the same. He asked Heather who she wanted to be in business with. Barbara said that she would be able to do more face-to-face meetings since she was also a New Yorker. Kevin stated that he would sell more of the product.

Heather asked Barbara if she would do 25%. Barbara considered for a minute and then agreed. The two hugged, and Heather said that she always wanted Barbara. Barbara turned around and told Kevin to screw himself. The other Sharks congratulated her as she walked offstage. Heather said that she liked that Dollop Gourmet was a two-woman show. She stated that she felt like her possibilities were infinite. Let’s see how she did.

Dollop Gourmet Now in 2018 – The After Shark Tank Update 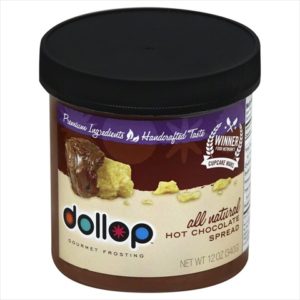 After the Dollop Gourmet episode had aired on Shark Tank, their website was inundated with new traffic and almost $45,000 in sales. Their sales projections jumped an extra $200,000. Heather’s ultimate goal is to sell the business to a major food competitor. In the meantime, Heather is looking to hire more people and bring her costs down as she stated on Shark Tank. Dollop Gourmet has been featured on Forbes, Oprah, and People magazine. In November, Heather is going on a 12 city tour with Dollop Gourmet. You can follow her progress on their Facebook page, or purchase the frosting on their website.