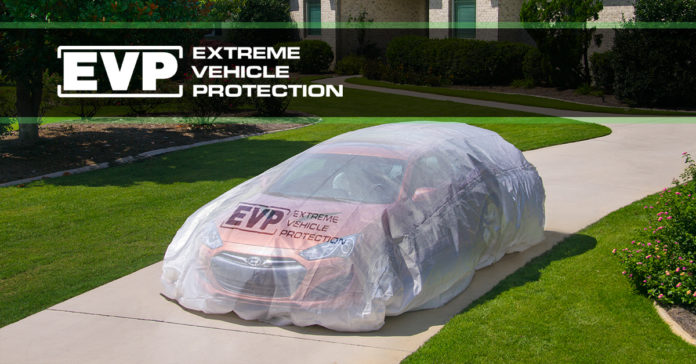 In 2013, Matthew Harris’ father had a weird dream. It was about a device that protects cars and trucks during heavy storms. Extreme Vehicle Protection was born. Matthew and Kenny started to make prototypes of the car covering, with various degrees of success. They tried out different materials to get the right one that could hold up to flooding and intense storms, and it took about seven months. Let’s see if the half a year of work paid off on the Shark Tank. 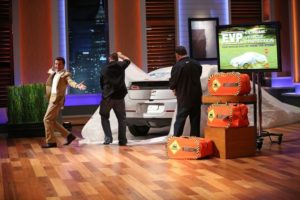 Kenny Lerner and Matthew Harris introduced themselves and asked for $50,000 in exchange for 20% stake in their company, Extreme Vehicle Protection, or EVP. Matthew told the Sharks that they’ve already seen “devastation across the nation” regarding hurricanes and floods, and there was always another one coming. This prompted the question from Kenny- “What to do to protect the vehicles?” Kenny posited that most people have plans for everything else in their lives, from a safe place in their house for jewelry and important documents, or an emergency kit in their vehicle for themselves, but nothing for the actual cars themselves. Kenny said that he had the solution.

Matthew stated that he wanted to show them how it worked, and he called Robert to the stage since he was the car guy of the Sharks. Robert looked excited and jumped out of the seat. He asked if they wanted him to drive the Chevy Volt that was sitting on the stage. Matthew said that he was going to have him drive it somewhere. Robert got into the car and was told to just ease the vehicle into the bag that Kenny and Matthew were holding. Mark laughed, and call the device a car condom. Robert proclaimed that he could not see a thing. Matthew told him that was okay, and to just keep moving the car slowly inside. Robert wanted to know how he got out, and he said to duck down and walk through the plastic. Once Robert was out, the two entrepreneurs zipped the bag up behind him.

Kevin called it a ziplock baggy for cars and wanted to know how much they were charging for it. Matthew answered between $250 and $350. Kevin asked how soon you would put your car into the bag – if it would be the first indication of a flood. Kenny told him that he would recommend it when the weather was a bit more extreme, more of a hurricane or Nor-Eastern situation. Something where it would not be easy to move the car to higher ground. Daymond told the pair that he liked the Extreme Vehicle Protection bag for a general use car cover since the ones that he already had routinely slipped off.

Robert told Kenny that he owns many expensive cars, and he bought something very much like this about 15 years ago. With the one he purchased previously, he would drive the car into it, and it would blow up around the vehicle. Kenny let him know that the primary difference was that the Extreme Vehicle Protection did not require electricity to work. In situations where a customer did not have power and no access to a generator, that would be pretty useful. Kenny said that it only required two people and two minutes to operate.

Lori asked the pair what their professional background was, as well as how they met. Matthew replied that he was a graphic artist for 20 years, and Kenny had been in the repossession business. Robert joked that Kenny must have repo-ed something from Kevin over the years. Daymond asked Kenny if he was still in the repo business, and Kenny told him that he left the business when he started getting assignments to repo cars from his friends and relatives when the economy crashed. It was no longer something he could put up with anymore.

Kevin asked what they thought the market for Extreme Vehicle Protection would be, and Kenny replied that since they were from New York, they had been up close and personal with the results of Sandy. Many people lost their homes and their cars, which made Kenny think that they could’ve turned a high profit during that time. Daymond, having no time for the hyperbole and conjecture, asked them what their sales looked like. Kenny started going on a tangent, and Robert interrupted, telling him he didn’t think it was going to be an excellent answer because of the rambling. Kenny assured Robert that it would be a good answer because they would get a very cheap deal if “they liked the concept.” The Sharks all laughed. Robert asked if it was a “get in on the ground floor opportunity,” and Kenny confirmed that it was.

Kevin asked if they had any sales at all, and Kenny let him know that they sold 150 of the prototypes until they ran out of them. Daymond wondered how long that took, and Kenny said they sold in two weeks to body shops, car clubs, and “anywhere where people gather.” Mark cut him off, and let him know that he did not see the business scaling to the size he would need it to to invest. Mark went out, saying that Matthew and Kenny still had an excellent business, but it just wasn’t investable.

Robert was up next. He said that he wasn’t sure that their whole business model was going to work. The explanation he gave was that people don’t think about their cars during an emergency. It would be the last thing that people would scramble to get, while they were thinking about their houses or loved ones. He wished them the best, and Robert was out. Lori said that she was not a car enthusiast. She stated that their packaging was eye-catching, but it was not obvious what the product was at a glance. She went out.

Kevin said that he would be willing to front the $50,000 in exchange for $30 a unit. It would be a royalty deal instead of an equity offer. Mark asked them why they didn’t just sell the bags for two weeks instead of taking Kevin’s offer. Daymond asked Kevin to clarify his deal. Kevin said that he would give them $50,000 in exchange for $30 a bag as long as the business was open. Kevin told them that they should consider it because he had an entire royalty team that gets the word out about the product, both through social media and through Kevin going on television to talk up the product and the entrepreneurs. Since he would be getting royalties on each unit sold, Kevin nd his team would be very motivated to help sell a lot of them. Robert and Daymond both told them that forever is a very long time.

Kenny told Daymond that the money was secondary to the exposure, credibility, and connections. Kevin asked Daymond if he had a better offer, and Daymond implied that he might. Daymond said that he would put up the $50,000 in exchange for 33.3% equity. He was demanding a full third of the business. Kenny asked him what his marketing plan would be, and Daymond sounded insulted. Robert jokingly asked Daymond if he brought his resume with him, as Kenny informed them that he was curious to see what Daymond’s ideas would be. Kevin said that he should interview Daymond for the position. Daymond laughed and stated that he might just have some retail experience and connections.

Kevin said with that plan; they would have to give up a third of the profits. Mark said that they would not be able to sell it because no large company would agree to the royalty deal. Kenny asked if they would terminate the royalties once the business was sold, and Kevin told him that he needed to get some return on his investment. He thought for a minute and said that he would cap out the royalties at $200,000. That way, he helped to get the business off the ground, and also got a return on his investment. There was some squabbling between the Sharks as they debated on whether or not Kevin would make the best partner without an equity stake in the business. Matthew and Kenny had said that they wanted someone to turn to, and Kevin would be gone once he made his money back. Daymond said he would be a partner and would help to sell 100,000 units quickly because he would be a full partner.

Kenny thought about it, and he decided that he would go with Daymond. Daymond thanked him, and the two shook hands. Mark congratulated them. After they had walked offstage, Robert told Kevin he had to go inside the bag since he did not get the deal. Kevin laughed. In his exit interview, Kenny said that it was a good feeling to be in the business of saving cars instead of taking them away.

Extreme Vehicle Protection Now in 2018 – The After Shark Tank Update 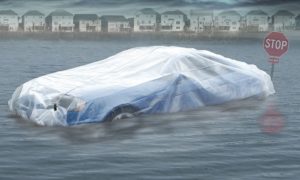 Since Extreme Vehicle Protection got it’s deal with Daymond John, they’ve expanded the types of items that they protect. Their website offers long term storage options for things like furniture, or outdoor equipment such as grills. Extreme Vehicle Protection also provides four different sizes of coverings for vehicles, from motorcycles all the way up to SUVs. Pictures on their social media pages feature what Kevin O’Leary called “Car Condoms” covering boats and cars during recent hurricanes. They have also trademarked their EVP name. It seems like this unlikely business is going places.