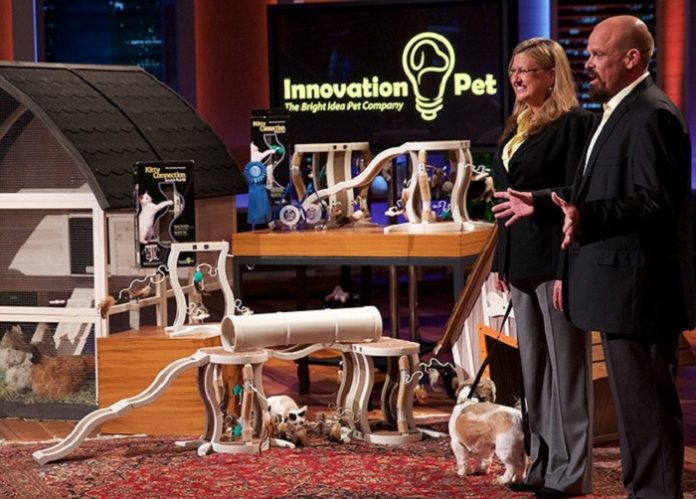 Tim Taft and Victoria Coopman, the founders of Innovation Pet, were ex business partners who had previously run businesses together earlier in their careers. They had successfully built a business of over $30 million in annual sales during the bleakest years of the financial crisis, in 2008, and Victoria had eventually retired after 12 years as the company President. The former colleagues stayed in touch, and it was at a casual meet-up in a restaurant that Tim had finally managed to talk Victoria into joining him once again in running a business.

The two were both great animal lovers, and they knew that the huge market for Pet Supplies was a sector that they both wanted to enter, so they founded the Innovation Pet company in 2012. After more than a year in development, they finally perfected their first product, The Kitty Connection. It was the result of months spent watching how cats play, and that planning combined with their extensive knowledge of the pet industry, with more than 35 years of combined experience in the market, convinced them that they had created a unique and winning product.

In 2015 the pair were looking for a backer to help them grow the Innovation Pet business more rapidly. They produced a YouTube video for potential backers, but received little interest in return. Fortunately a Shark Tank producer happened to chance upon their professional, but friendly presentation on YouTube, and after an audition process that Victoria later described as ‘passing in a rush of energy’, they eventually appeared in the tank in March 2016.

When Tim and Victoria came to the Shark Tank they were accompanied by a few furry friends to improve their chances, and it looked like they would need all the help they could get when they announced to the sharks they were looking for a $250,000 investment in exchange for just 5% of their business.

A few worried looks crossed the faces of the assembled sharks as they digested the huge $5 million valuation, but Victoria didn’t give them too much time to think about it as she launched straight into the pitch. She extolled the virtues of pet ownership, and opined that it didn’t matter if someone was a dog lover or a ‘crazy cat lady’, Innovation Pet had a product for them. Tim joined in the presentation and displayed The Kitty Connection cat toy to the sharks. The Kitten that had come along seemed completely fascinated in the toy, which was festooned with feathers and bells, and all the other things that cats seem to find so interesting.

Lori had seen the kitten, and was clearly highly impressed. Victoria was quick to hand over the Kitten, which we’ll call ‘Darnell’ for reasons which will later become clear, to help impress Lori even more, and Lori and Darnell became friends while Robert remarked on the unusual, cartoon style doghouse.

‘It’s very cool, and I know about being in the Doghouse.’ he joked. ‘You’d want to be in this one, it’s very cute’ responded Victoria smoothly.

Tom took the reigns once again and told Robert the ‘Whimsical Doghouse’ had been by far the most popular launch, and was one of Innovation Pet’s best selling products. He also revealed that the company had another ten original products in the pipeline.

Lori wanted details of the upcoming innovations, and a cardboard cut-out of a cat, sitting atop a skateboard suddenly appeared. Tim explained that the concept was to create a remote controlled toy that cats would ‘love’ to play with and sit on. Mark Cuban gave a wry smile, as if he was gauging the mental stability of Tim and Victoria.

Robert Herjavec inquired about the Chicken coop. Tim eagerly explained that this was a unique product amongst rival chicken coops, due to the fact that it had one large folding door at the lower end of the coop, thus allowing easy access for chickens, and far better than other coops, which all had small, badly placed doors. Daymond John appeared to be distracted as he picked up Darnell, but he revealed that he had just purchased six coops for his guinea hens, and he guessed that the retail price of Tim’s chicken coop was about $700. Tim revealed that it was only $599.

Kevin O’Leary had barely made a sound during the whole pitch, but now he brought up his main concern. ‘You’ve got a $5 million valuation’ he stated, inviting an explanation.

Tim revealed that Innovation Pet had made $2.5 million in sales in the previous year, and the sharks looked impressed. Kevin asked where the sales were being made, whether online or through retail outlets. Tim answered that sales were through both avenues, and Innovation Pet products were stocked nationwide in several large pet stores, he revealed the chicken coop was stocked at the large pet store chain Petco.

Tim and Victoria were holding their own well, but Kevin still seemed disturbed by the valuation, he inquired what the average profit margin across all products was. Slightly reluctantly Tim admitted that it was approximately 27%. ‘That’s not so good’ remarked Kevin, and Tim explained that some of the larger items, like the chicken coops had far lower margins. Robert asked what the profit margins were without the coops, Tim revealed it was over 40%, but he defended the coop sales, assuring the sharks they ‘drove dollars’ towards the company.

Robert admitted that the designs were beautiful, and that Tim and victoria had completely succeeded in their distribution strategy, but the business needed a huge amount of capital in order to grow substantially. He told the pair that the $5 million valuation could be a reasonable figure, but he couldn’t help with the businesses growth, and he was out.

Mark Cuban admired the entrepreneurs strategy, and admitted it was a smart play guaranteed to achieve steady growth, but he told them the Innovation Pet business was not his ‘Wheelhouse’, and as far as he was concerned, if you’ve seen one chicken house, you’ve seen them all. And with that Mark was out too.

Tim and Victoria looked a little worried. Kevin took the opportunity to once again complain about the $5 million valuation and the ‘unexciting’ 5% equity. More bad news came for the pair when Lori dropped out, suggesting that licensing the products was the way forward for the business.

With three sharks out of contention Kevin had a lifeline for Innovation Pet, he knew the business needed money to increase manufacturing capabilities but he pondered how he would make his money back. Eventually he had an offer for the pair, he would provide the $250,000 investment, but he would take a 6% royalty on all sales until $500,000 had been repaid. He told the pair that he would also take the 5% equity, as ‘I’m your banker now’.

‘At least you’ve got a deal now, unless Daymond wants to step in, he likes chickens’ said Kevin, and all eyes turned to the FUBU boss.

Daymond admitted that the 5% equity wasn’t attractive, but he offered to take on the financing problems of the business, and supply the $250,000, but only in exchange for 12.5% equity, and 25% equity of online sales, but he asserted that he would help build the online side of the business.

Victoria admitted that their main concern was the cost of the purchase order financing, and Daymond confirmed he would take care of that, he shifted in his seat to reveal the kitten snuggled at his side, and he joked ‘I’ve already consulted with Darnell’, and so the kitten got his name.

Tim and Victoria embarked on a lengthy whispered consultation, and even Kevin O’Leary asked if they wanted to step outside, but eventually they thanked Kevin for his offer and told Daymond he had a deal. Daymond and Darnell got up to shake hands, or paws, on the deal, and Victoria and Tim left the tank overjoyed at their success in the tank.

‘We did it, Buddy’ remarked Daymond to Darnell, but Darnell said nothing, merely content to sit on his new shark friend.

Innovation Pet Now in 2018 – The After Shark Tank Update

Immediately after filming Victoria and Tim seemed to be overjoyed at their new partnership with Daymond. They were not even concerned that their new partner appeared to have taken possession of Darnell, it was all smiles as Victoria confidently predicted that their online sales would quadruple overnight, but since the program first aired, communications from the company have appeared to go a little quiet.

There is no obvious sign of any problem with the business, however the semi regular updates on the companies social media accounts have faltered and dried up, as of the present time nothing has been posted by the company since the middle of 2016. Another worrying sign is the lack of any kind of update from either Innovation Pet, or Daymond John as to how the partnership negotiations have proceeded. I contacted the company and asked for an update regarding the new partnership, but I heard nothing back.

It’s unlikely that Innovation Pet’s future success would be greatly affected by the Shark Tank deal falling through after filming, but the lack of Daymond’s assistance in financing future orders would certainly slow down the growth of the company. When it comes to the accolades for their innovative and original pet toy designs, they are large in number and really do speak for themselves when it comes to the uniqueness and quality of Innovation Pet’s designs. With awards from Pet Sense, Pet Valu, Petco, Pet Supermarket and the Global Pet Expo in the past, the design and inspiration to keep Innovation Pet firmly at the forefront of the multi-million dollar pet supplies market lies entirely in the efforts and talents of its founders, Victoria Coopman and Tim Taft, with perhaps a little bit of help from Darnell.